I must have had the right timing when I was watching the Salaryman Club and Chihayafuru S3. Because the same theme appeared in both and felt a calling to talk about, something we all question ourselves with as the years roll on.

I’ve been on that plato countless times of why do I keep doing this thing of tapping my fingers away to a screen so words appear and press publish button? I have AMV making, running the podcast I could easily drop this joint and be content with these things. Getting older, doing less mindset really takes over, the logical, appealing option. We should drop off our old endeavours and move on to the bigger and better. 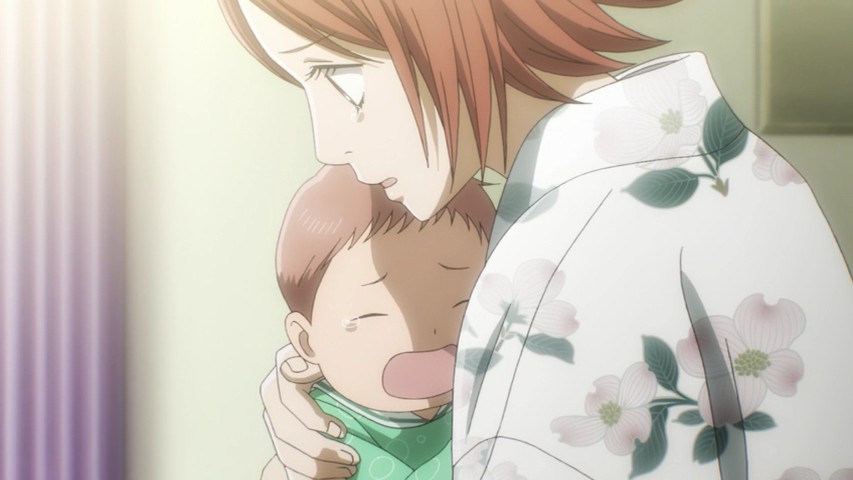 Currently still making my way through Chihayafuru S3 more 20 episodes are a long haul compared when I was 15 and felt like a breeze to sift through. Age really reflects upon this a lot. Haruka Inokuma a previous Karuta queen coming back from maternity leave has her work cut out for her from a long absences. Karuta for more than a card game requires both physical and mental energy, older participants like Dr Harada and Haruka have to work extra bit harder as bridal youth reigns dominating theme among the sport.

Chihayafuru was my very first sports anime even though the series delves into other themes and still now most favourite thing about it is the analysing of each character and life themes. Another Haikyuu even focusing on other parties you think you wouldn’t care about plus showing off the burning desire resilient that what makes a human, human. Episode 13 in Season 3 Haruka reaches a difficult crossroad between her love of Karuta and family responsibilities. Having children is one of life’s biggest commitments and though I don’t have children, I know to understand you’re going to forget yourself and your needs. It’s what happens in life.

Haruka makes an obvious remark “Am I too old to be doing this?” telling herself to back out of it. That’s fear talking which is either is biggest driving force or the greatest weakness. Right before her match Haruka is struck with the negative gravity for doing something ‘selfish’ participating in queen qualifier. Haruka spills hot water when she’s about to fit her youngest and Jin other son starts cleaning up the mess with a smile and Kanade mother aids Haruka in feeding her through her hakamono. Kanada words of comfort and looking at her son settle the swirling negative for Haruka and bring her back to one focus why she is where she is.

Usuyama Toworu gave up his passion badminton to focus on his marriage and new baby on the way. Towards end of episode Seven in The Salaryman Club is big deal for Usuyama as his wife and child encourages him to go back to Badminton. Usuyama stands on the pestidal of not worthy and it got me bad when his wife says even if you fail you can find a new dream. Usuyama was an individual that needed those extra words to hear of allowance for himself to pursue what was still lurking strong within him. It’s adorable he runs after his co workers begging to join badminton team for the corporate tournament. His wife also saying it’s okay for you to have dreams even after marriage and kids made me tear up a little.

Kids, marriage, studying, new relationship all these life factors become more precedent always and this forgetful wall appears around you, that you put their without realising. Forgetting your own needs because this is more important and I can’t make the time for that old flame of passion, new hobby want to pursue. The ‘getting older’ commentary know what is just you saying you gave up, admitting you gave you in. Gave into what is expected of us in this human society. Age does not decide you will give up this passion you’ve been doing since you were seven, it’s you who does. I’d like to think we are living in more freedom times of you can do whatever pursuing things that make you happy but still that old stigmas ground us like it’s groundhog day. That when we get a few wrinkles this dream or current thing we love, it is deemed over for us.

Haruka and Usuyama may have needed those extra words of allowance and acceptance to hear because we can’t do all alone without some support, because we need that pick me up at some stage. It shouldn’t be to live for your passions which is why people get burn out with this mentality. It should be to live to enjoy them, make you feel alive for whenever you need it.

It has indeed been a great while since I wrote a personal piece like this, these moments just hit me when I was watching these two shows and boom inspiration happened.