I’m kind of crap badminton but watching these salary males flex their shuttlecock action made me forget I don’t need to be good at everything. heh.

Sounded like a naughty introduction there but naming those feather devices shuttlecocks sets up a dangerous line of thought. But how did I get to watching out of the blue this sports series? Deja-vu seems to play a mysterious part, badminton had entered into my personal life just recently and has disappeared now. When it had ironically Winter 2022 and this Spring season have both badminton series airing. Love All Play I was initially interested but no longer. The Salaryman’s Club had the stronger appeal average working salaryman playing badminton on the side as apart of a corporate tournament. Adult working setting for a sports anime was the first draw card and everything after made me think: How have people been sleeping on this?

The Salaryman Club didn’t miss a beat on accuracy with everything but the shuttle marker animation was a smash hit. When I found out Lidenfilms were involved, myself know we’re in for a treat and the animation work was sublime. No fast corners were taken, every angle, every shuttle smash down precision of care and details is easy to see. The care factor to make the shuttle action look best as possible is plain to see. Animation creating a fierce ferocity everytime shuttle and ground collided, it leveled up the investment factor towards badminton focus because even that was not left behind.

Badminton on surface until I played myself looked not challenging to me only endurance wise. I played a bit in primary school but coming to playing now it was appranant skills had been lost and we couldn’t hit the shuttlecock for life of me. A key thing in badminton in real life is not to hard smash every time some resistant is required and flow. This anime does not exaggerate entirely the fast intensity when racket and shuttle meet then face down onto ground. I think the salaryman club badminton accuracy on technique and ferocity was dead on. Makes you take badminton focus seriously the animation only half helped with this, other half was down to other accuracy.


Get Your Team Building Right Here 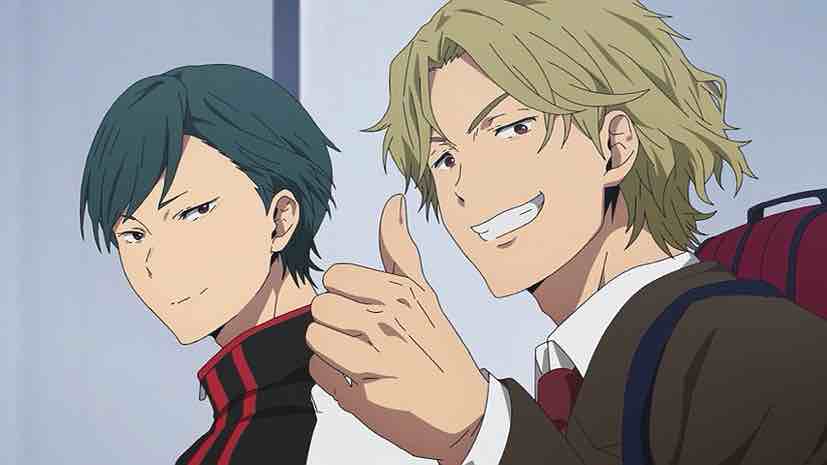 Tried to rack my brain for all the sports anime I’ve watched they were set in an adult setting, only Run with The Wind was and then I started this series. Definitely should be watching more of this appealing setting because The Salaryman Club did it like it was no effort. Shippable men for girls to salivate over, accurate sheer flaunt six pack factor and fun, spunky male character cast. Mikoto main face of trauma during majority of this series a prodigy at the bad game with his amazing foresight ability. Joining the Sun beverage corporate company as a last resort changes everything. That typical kind of plot explanation sounds great? and it is, the treated focus on Mikoto I loved with the aid and support of his senior Tatsuru. These two a absolute fun combination. I loved them well. . . especially Tatsuru he was my favourite.

The intermissions between work and badminton game were greatly balanced and division time between other sun beverage team members. Male chemistry was it’s highest tier, I even was not  expecting hilarious charisma, definitley Mikoto discovering alcohol was a great moment. Everybody in the badminton game for different reasons big shocker there like in any sports anime but in this corporate setting, you’re seeing different angles than usual. One example one of the guys gave up the badminton game to focus on becoming a father and getting married. The yearning for the game has never left them and the feeling manifests hugely through the series and this focus was appericated. How the amazing job haikyuu does for its entire anime cast, this series does the same but on it’s on beat. I noticed people were comparing this anime to Haikyu! from every angle, which was ridiculous. comparisons are not fair like that to one of the most popular sports series, getting people’s expectations up that it will meet the same tier.

This sports anime stays the flow and keeps to its own. Everything is kept simple and clean, the badminton execution is slick. The Salaryman Club can go in my 12 episode favourites because everything was good, super good for me. I feel like I use to be a alright at writing reviews but now I find it even harder than ever to describe really good series these days. I heard one of the first badminton anime that came out Hanebado was either hit or miss. I had never been interested in that one so if that anime was a miss for you, maybe Sarayman by day and Badminton by night can be a smash hit!

I only just finished this anime yesterday so if I don’t talk about it now when will I ever? But I was surprised how many slept on this and lack of talk of this anime, when I went nosing around wordpress and other sites. A underdog secret no more! I hope it gets a second season that would be nice because I want more Tatsuru abs!

Did you know about this series? Now you do? let me know!