Sailor Moon, Dragonball Z were among my classic staples as a kid but there was a show that lead me down the weird avenue of anime, to what this medium would create about anything.

Starting off the new year with some nostalgia is my advice to those who are struggling to come up with a opening post. 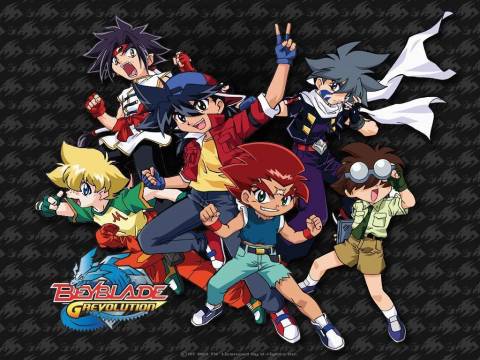 Beyblade has been the few answers of many every time I’ve asked “What were your childhood anime?”. Which makes me sad slightly but the few that do like it, I’m grateful to know like one of my very good blogger friends, Two Happy Cats. Who is my blader-in-crime I can go to about this old love. I’ve briefly mentioned this childhood favourite on the blog but never talked the depths of my bond with this series. An anime about spinning tops might not sound that exciting to the generation of now but in early 2000s it was all the rage.

The original first three anime series are what began the cult following it has grown to. Beyblade G Revolution was my introduction, final installment, not that I knew that at the time. This was when I was still in the UK, watching on a kids channel called milkshake. Beyblade became my Saturday morning rituals, life didn’t feel like it could get any better. One thing that can never make me forget this fond tradition was in the era of VHS tapes, I used this same old tape constantly to record the episodes I knew I would miss. The thing looked like it has seen world war three after sometime but the amount times I rewatched that tape over and over, was ridiculous.

It didn’t take long for my obsession to sky rocket, that was when I got hooked on fanfiction for first time. Anything involving Kai someone would recommend, I would be there. Kai Hiwatari my first anime crush ever, the classic cold ass jerk, that kind of character is everything to an angsty teenage girl. I still have an old drawing I drew of him in 2006 when I stayed over my nan’s one weekend, everytime I look at all comes flooding back the joy from creating it. Something else that took form was I wrote my first fanfiction based on Beyblade, I still manage to keep the original copy in tact. For years I’ve said I’ll rewrite it and post it for the world to see my hot mess but maybe this year will be the year finally.

One thing I never went back and did was watch the first two original series to see how the main cast grew to the strength in G revolution. I really should but my attachment to G Revolution is pretty strong, haha will see if I do. I read up the past history of how everyone came together that’s good enough right?

Beyblade might not have sounded like the coolest thing on the market at the time: spinning tops battles. What could possibly be the excitement but in that? I truly asked myself that question in the beginning but once a new obsession starts, you just don’t care. My personal take on it was without these spinning tops having what you call a bitbeast instead these blades, (mythical or fantasy creatures) things would nowhere near as exhilarating as the battles exude. Truly what these early 2000 series possesses specially was hearty teachings like Yugioh. “Heart of the cards” how long has that motto stuck in your head if you are a fan.

Main cast Tyson, Max, Rei, Kai, Kenny and Hilary are the heart of the first three seasons, incredibly fun bunch to follow through the journey of their own individual and groups beyblade trumphents. The boys friendships is a constant rocky wave of rivalry and then coming together in a time of need, I love this characters balance truly a lot, it’s one of my favourite anime friendships out there. I’ll make a list sometime on that subject. To make a plot about a spinning tops work, the characters have to be able to steer at all times and they do. There is no way I’d have such a infatuation with this series if it wasn’t for the characters, even to make the side characters.

Something I never dreamed, never was once upon a time the official Beyblade website existed (that I remember). I would check on the daily for no reason because I just had too. Until I discovered a championship tab, clicked on it and I was watching a real life beyblade battle. MY eyes blinked before registering this was a thing. . . after researching this was a yearly event held in the US and Europe (very popular there in particularly). It has continued through since that time but there is a divide of who are participate for their love of the toys and fans of the anime or mix of both. It’s kind of laughable this is a thing but serious looks on the kids facing when playing, it makes me feel elated seeing.

Sadly I never got to purchasing my own Beyblade but it’s never too late right?

I may not have a Beyblade collectable but what’s even better is owning the whole original third season on BLURAY!!!. This is why I love Discotek Media. I remember when this was announced, my mind exploded and they were going to license all of the original seasons. This only came into my possession this year after being on my amazon list for 2 years (how awful of me I know). Christmas eve I decided to begin my rewatch of this childhood favourite, which is why this post is happening. Plonking my feelings to you, what else is this blog for? I am living my best life right now reliving this amazing nostalgia.

This series is great beginner series I still think after all these years for children into anime if you were struggling for a choice but I’m just imposing my personal love onto you. You should listen to me strongly on this haha. If you are curious if spinning tops will be for you, you can watch all the original series and more on the official youtube channel. Which is amazing to have legal access to this ancient series.

Please let me know if you are a fan of Beyblade because we would have much to talk about here!