Your younger Childhood, mummy and daddy could never shelter you from “that” world of desires and discovery of one self that is an important process shaping who we are.

I’m making good for myself watch those shows I have avoided and wanted to really. A few on that list were on streaming service HiDIVE which I signed up to last week. Friday night I really needed a desperate distraction and without realising slung on a show high on tier list, I’d wanted to see since it came out in 2019. Exploring an important conversation with it’s own representation of the taught birds and bees.

Sexual Ed Never Covered It All 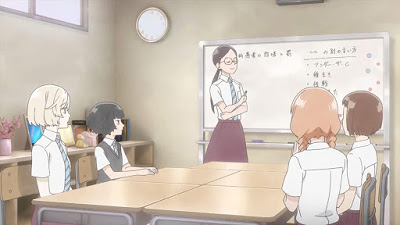 No-one knows actually truth in the phrase your’e parents probably told you “Birds and the Bees” to explain when 4 year old you asks “How are babies made?”. Birds laying eggs suppose to represent connection of female eggs in our uterus and bees pollinating represents sperm. If you ask me is a terrible example to use personally isn’t it easy to show them a David Attenborough documentary, David has a calming voice to explain. Five girls apart of a Literature club can’t even get passed saying the word s-e-x without having an embarrassing fit over it. So birds and bees would just offend them even more to suggest using that elementary terminology.

I actually really dig the title of this series, what first captivated me about the series. I read first volume of the manga then finding out had a anime automatically put high on my list. O Savage Maiden In Your Season fits in the realm of series like Scum’s Wish, Love And Lies with the strong themes of romance, explicit and emotions. I love some fluffy good romance much as next person but when a series like this comes along speaking a conversation that you know you’ll relate to and especially on topic of sexuality in different forms. My fascination awakens to how the series will handle it all.

O Savage Maiden In Your Season rips of that band aid on the topic of sexuality, giving us each different scenario among the five girls. Each girl is at the ripening season to explore that world of desires foreign to them but each in a different perspective. The girls curiosities are healthy and natural ones, to me their normal reflecting on the world of today. Their personal reactions weren’t over-the-top in my eyes, doesn’t matter what anyone saids puberty is a scary time and can be overwhelming. I’m not just speaking on the topic of sex but also the emotional aspect which they never covered in my sexual education class.

It’s All Scary For Either

It would be really weird if someone said to me they couldn’t find a single relation to any of the characters within this series. I felt like each character represented a different component of the stages you’ll face in your sexuality journey. Kazusa is the starting point. Next to Rika club president Kazusa is your next in line innocent. Once the club starts reading more mature titles: erotica novels and the word s-e-x is spoken this sends Kazusa into a spiral of confusion. The first episode did a great job highlighting the already evolving emotions within Kazusa and one particular scene. Kazusa does the 100 metre dash stopping near a roadside, she’s sweaty and gripping on the fence a few feet away. She’s screams out her emotions as anime loves to take advantage of scenes like this. Effectively impactful.

The disregard and denial Kazusa puts herself in dealing with all these unravelling worldly desires, the series didn’t put down in cowardly fashion. It shouldn’t have and glad it didn’t. The whirlwind of emotions that wanted to erupt inside Kazusa is a real reflection, I’m sure you can relate to in a stage of your life. To me Kazusa reactions to the pantie world then her own sexual appeal are healthy and normal. If the anime hadn’t made any of it so then I wouldn’t even be discussing it here. As indicating in the subheading “For Either” I was referring to Izumi and not just Kazusa.

One thing I really loved the series did in regard to Kazusa and Izumi relationship was childhood aspect. For the first time ever wasn’t just for the female but also for the male. I’ve seen a few romance anime where childhood friends make that leap but it’s to make that transition. The anime looked at the dynamic in a broaden scoped, god which I loved. Right after Kazusa expresses her insecurity, the moment Izumi admitted it was especially difficult to view Kazusa in a romantic way, the awkward expression. He loves her like a sister/family, The sincere emotion Izumi was expressing just made my heart float. Yes weird such an emotion made me happy but this moment between the two, placed both on equal footing and felt like they met each other half way. This is something to the childhood dynamic I’ve always wanted to see addressed, where both characters are on same page, whole handling between Izumi and Kazusa made that dream come true.

Messy and emotional pool of colours the world of sexuality for each individual. For these girls went in different patterns. Two in particular might trigger some of you in regard to young girls being groomed and teacher/student relationship. The world of sexuality is even more complex than when I was a teen and this series gives a mere glimpse to that set of complexity. While there was a strong emphasis for the female here, I loved the series included males are not out of this equation. That males experience the same messy, physiologically, confusing time of puberty like us females do, addressing for both gender perspectives.

There is lot of second guessing yourself, self sabotage the girls experience from others and doing to themselves which was aspect I appreciated seeing in a raw lens. Other times acting on impulse and stuff this crap moments equally I appreciated to see as well. All important markers that shaped the characters into finding their own sexuality by the end and finding acceptance for themselves. Even then they find it but reminds us always a work in progress figuring out where you feel you fit, your desires. Learning a part of yourself you didn’t know existed.

If my sexual education class had made us watch O Savage Maiden In Your Season each class, I’m sure I would have a different mindset compared to “Sex Is Gross”. While the series address some significant points, there is some comedy relief which lightens the load and not full bear drama. From discovering vast panty world to my crotch is itchy to avoid creepy men, those thrown in moments make this watch more enjoyable. I truly appericate what this series addressed in some aspects not everything was perfect though, but one thing it got right. The world of desires makes us savage beings indeed.

I get nervous covering the topic of sexuality especially now so vast and more complex than I remember. The wait was so worth to watch this series and sad I put it off for so long like so many on my list. This post would have been so much longer because this series covered so many aspects I want to address but I’d have to break down each one. Maybe some point I’ll do another covering each girl and my thoughts but for another time.

I’ll see you in the next one~!