Welcome to a swinging Sunday. .  A pun that actually works out. Most of the time I don’t get them, I have an interesting Top 5 that will take you back to your younger days of enjoying the classic swing.

Nothing stops me going on a swing even at my age, don’t let that ever stop you if you see the…SWING! A swing makes you feel from going back then forward that you will touch the sky, there was no better feeling to me as a kid. Expect jumping off speed then falling face first a lot. The reality use of a swing is to be fun and using that whole lazy body of yours but media in general, carries a symbolic essence that draws out an emotive response from audiences. In anime I’ve found steers the angle of dramatic, emotional pull 80% of time. Swing scenes I find particularly symbolic within anime full of reflection, sombre and powerful utilised tool for emotional attachment to the fullest.

I actually can’t remember what sparked the idea for this post, all I know is had been sitting in my notes app on my phone for last 5 months. Coming up with five swing scenes out of 500 anime I’ve seen so far wasn’t a fast food for thought. Looking through google images I surprised myself of how often the “swing” scene is used but that didn’t help, after half an hour of searching my brain and ani list. I’ve got five particular scenes that have stayed with me for one reason or another.

I couldn’t include all sad swing scenes otherwise this would be a depression read. Aho-Girl a comedy short series I watched three or four years ago. Fantastic comedy for a laugh, it still has me in tears wherever I revisit just for the odd episode. Air head lead Yoshiko is your ultimate idiot. It’s quite the fast sequence of events Yoshiko joins on a random young group’s game randomly, her childhood friend Akuru confused to what’s going on. Yoshiko she’ll win the game with a classic move you and I probably have done before, stand and swing  but coming for Akuru is a flying kick. Nothing she ever plans goes to plan and it’s a hysterical. Yoshiko in this scene reminded me of my dare devil attempts, doing all sorts of stupid moves like hanging upside down from swing sweat to see the sky differently. Yoshiko reiterates the fun function of the swing will always bring out your inner child.

For long as I’ve seen Sailor Moon Minako throughout has mentioned her dream to become an idol. In Sailor Stars one episode takes a deep focus on her characters aspiration, where Minako finally may get her big break. Half way through the episode Minako confides in Artemis of her hidden doubts from always being optimistic on the subject. The 90s aesthetic of animation is something I truly love of this era, the pink sunset sky, street lights come on one summer evening. It’s a mood being created here, an air of reflection for Minako, questioning her own passion for what she’s wanted for so long. Sailor Stars individually focuses on scouts more than other seasons and I appericate inner dive into Minako’s character.

I feel like this list is telling me to watch more anime shorts. Momokuri I’ve spoke about before adorable romance short series about a lot of your first in romance game. I reckon this particular swing scene is what sparked this post idea, almost positive because a perfect example of everything being utilised for that emotive response. Shinya and Yuki have only been going out a while, Yuki is more assertive about her feelings for Shinya. Yuki likes Shinya but her affection makes him feel like this adorable, cute thing she can’t help dote on and nothing more. Shinya truly opens up here as two sit barely 2 metres apart, out of nowhere he grabs chain pulls Yuki over and expresses his frustration, that Yuki doesn’t see him as a man. Shinya is a man much as he is timid that certain things she says make his mind run wild. Yuki stunned from shock begins to see Shinya in a different light. This scene is very direct towards Shinya’s approach and his feelings, that’s why I could never forget this scene in particular. 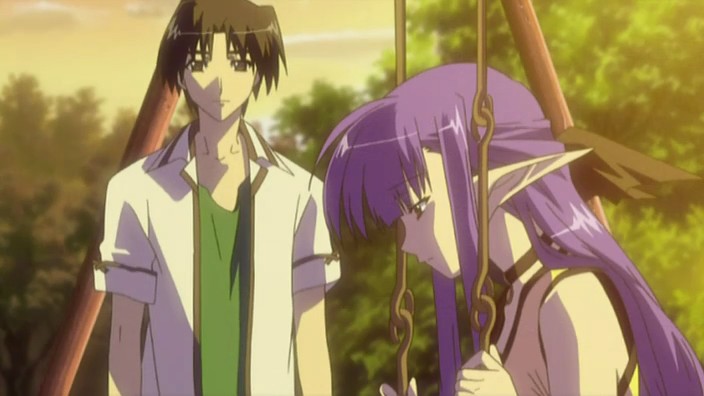 Swings and confessions seem to go hand in hand very nicely. One confessional scene I’ve never gotten out of my head was from known as “harem classic” Shuffle. This episode is what made me love Nerine. A sombre, conflicted air surrounds Rin and Nerine, as Nerine swings slowly back and forth. Seems to be a thing also swings, confessions and sunset are a favourite combination which again meld well together. Nerine in this episode goes through quite the change within herself, and I mean literally herself because there might be two. Not spoiling on that note. Nerine through sad circumstances finds freedom for her own feelings to grow and confesses to Rin what’s been harbouring in secret. If despite anything be allowed for these released feelings to continue to grow. Seeing Nerine face up-close while gripping handles, pouring it all out is sad. I know there are many scenes like this but in Nerine case, the sweet poor girl. 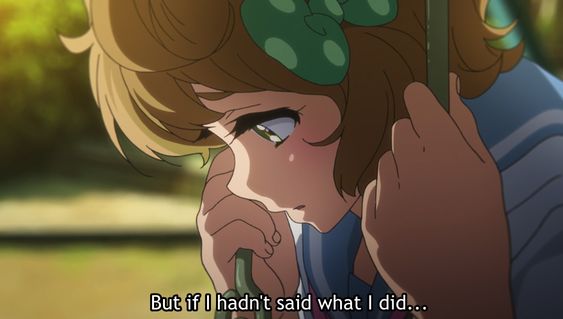 Oh this anime is a melody of emotion. Fantastic series, watch everyone if you love music. I nearly thought this was going to be a top 4 but I remembered this guilt sense of a swing scene. During this episode auditions on the horizon for everyone but there are distractions, Sapphire shoulders herself with guilt from encouraging friend Hazuki to confess her feelings to her crush. Only for Hazuki to be rejected. Putting her not in the right mindset to practice. Hazuki and Kumiko comfort her. . . well Hazuki way of that constantly light tapping her head saying “chop, chop”. This light humour brings ease to what could have been a real sombre swing moment. Hazuki jumps onto swing beside Sapphire telling her to not worry over something wasn’t her fault. Hazuki giant swings expresses she feels hurt from her rejection but free feeling from no longer having to fuss over feelings. Feeling gratitude towards her kind, encouraging friend. The way written all over Sapphire’s face, the responsible guilt clutching to the swing hands make a mass impact. The deepness of scenes like this get you good. You can’t tell me they don’t.

Wow wasn’t that fun my own analysis on swings. . . . well my own take on the topic. Anime always makes me look at things never the same again. Who knows my next confession I’ll be sitting on a swing ready to burst my feelings. Swing scenes in anime have a real symbolism of free nature and sombre. Anime utilises this scene really well every time and this was fun to explore the matter.

Who knows what angle I’ll do next? maybe teapots or waves? Feel free to leave suggestions of an angle you’d like to see covered.

Hope you enjoyed this “insightful” read! See you in the next one!