Two weeks ago she made my week.

Writing anime reviews just isn’t the same for me anymore, now I roll up to the computer and just start typing. There is no structure anymore. I like writing about anime that strikes a meaning to me instead of the mentality to review everything I watch. A Tuesday two weeks ago I came home from my horse riding lesson (I just started doing few weeks ago) and really want to watch something revolving around on horses. Uma musume: Pretty Derby a series I placed on pause ages ago was perfect choice for this craving. I ended up finishing whole series in one evening and that feeling of shame came over me for even putting it on pause. 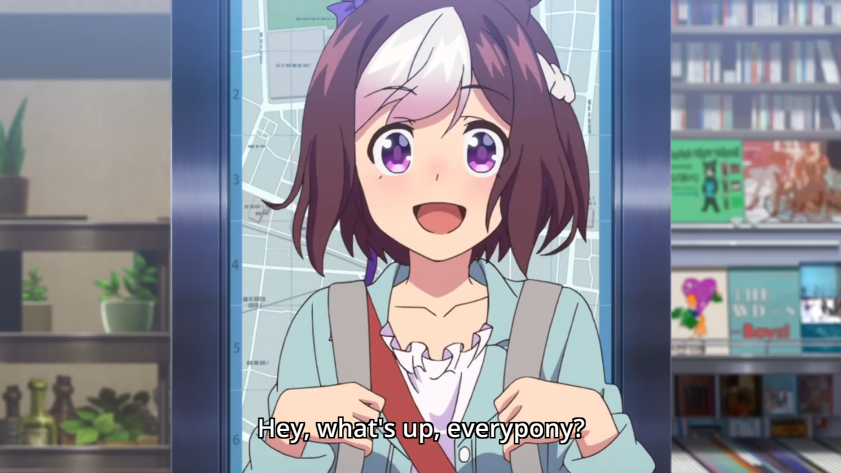 Uma musume: Pretty Derby really is a fun series and P.A Works going out of the realm once again as I’ve come to know. I hate horse racing in real life but guess what made this okay was they were horse girls? it’s weird why I was okay with this anyway. If there had been a anime about a girl and her relationship with her horse then I would have watched that instead. Maybe it will come into existence one day. Pretty Derby was the closet I’ll get related to horses and I really just adored it. There is an enormous cast here but every horse girl had their own individuality. All the main Horse girls from Team Spica are especially adorable group. Entertaining chemistry and many funny moments. Oo But who was best girl? Special Week. Not just her name which grew on me fast but those amethyst eyes and white tough of hair at the front. She was a shining ray of positive and energy that just puts a smile on your face. Special may seem over the top enthusiastic but the girl had her heart in the right place.

Horse girl from the country who wants to be the best horse girl in Japan. With a goal like this you weren’t going to get a full blown journey like Haikyu volley ball boys. But Specials race to her goal was still investing. The emotional promise she makes to her mum to be best horse girl and learning new techniques to bring her A game made me fall in love. I’m just a sucker for rays of positive characters like her, I blame Tohru Honda for that. OH another best girl Special Week’s bestie Silent Suzuka, you think of the name she may seem cold, withdrawn. Complete opposite I discovered absolute darling, super sweet and hardly her fame has gone to her head.

A big cast in Pretty Derby but surprisingly did a good job at giving main girls on Team Spica and side characters balanced focus during the series. Season two just finished airing for Winter 2021 and I hear focuses on the rest of the cast, making me super happy. Whenever I get to watch it. Characters are a massive win for this series but what wasn’t was the idol element thrown in there. After the race whoever won one girl or multiple would sing. This element to the series confused me why it was included, not sure about that. Another thing the comedy aspect was a hit or a miss, Special Week trying to avoid her favourite treat of carrots was hysterical. Carrots make horse girls fat. One episode in particular someone selling them then making a dash to avoid. But team spica’s coach random harmless perving moments towards the girls and nosebleeds, I didn’t find funny much.

The races are a little predictable of who wins the races or who doesn’t but there were couple of times I didn’t expect. Part of that aspect, loved learning Suzuka known as the best of the best reasoning for why she loves to race: she just loves running, feeling of the wind in her hair. Those heartfelt, honest feelings really made me love her in general in the end. Each horse girl has a pure desire to wish to be the best and hardly anyone with stuck up intentions. That was refreshing to see.

Something cool I learned about the series all of the horse girls are named after Japanese race horses. Nice to have a horse reference of that sort included here. Uma musume: Pretty Derby was a surprise love, the girls are what made me love it. Especially those ears and white, purple school uniforms. This series was just about a lot of fun and adorable horse girls. For a video game adaptation lots and lots of harmless fun. Horses are beautiful, intelligent creatures so now if you just give me someday a real horse focused anime, I would love that.

I wish things in real life stop having me relating to anime in some way. . . haha no way have I been able to help that for the past few years. Pretty Derby was ready sitting in my paused list for this reason it seems. Just goes to show you don’t have to complete those on-hold anime in one go.

You can watch on Crunchyroll!

Hope you enjoyed the read and I’ll see you in the next post!

3 thoughts on “Special Made My Week | Umamusume: Pretty Derby”