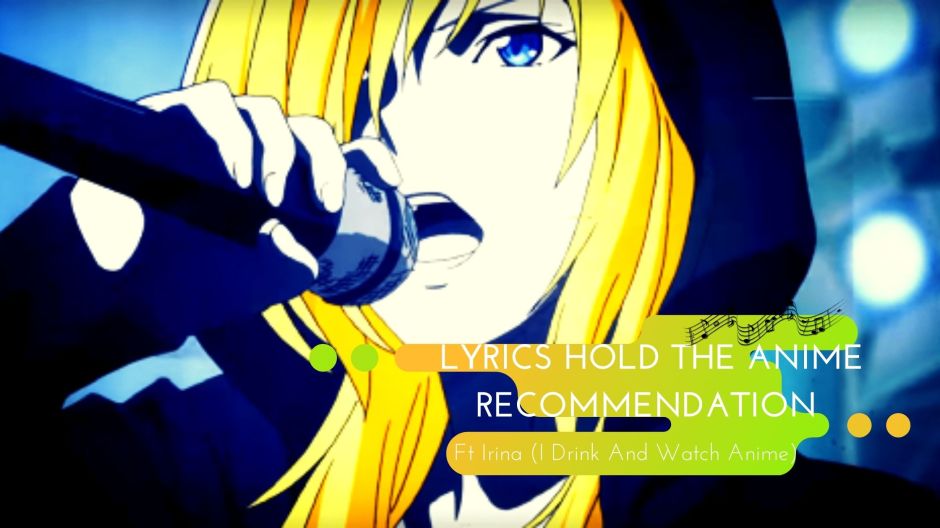 You can just about learn anything about anyone from cars to music. So who wouldn’t want to learn about Irina music tastes or mine? But with a anime addition.

Oh so so long it’s been I’ve done a collaboration and for an idea I had in mind. I asked a fellow wonderful blogger and friend who can get you drunk easy with her anime reviews to join me. Besides that, has been a long, long time since we didn’t anything, she was all aboard for this one. I love blogging has no horizon on creativity and makes me ask why can’t you recommend anime through lyrics. Me and Irina picked for each other from five songs we love: either a verse or chorus. Using those lyrics as inspiration then we had to come with a anime to recommend and why we chose it.

Hi guys, Irina here. Isn’t this post idea just so fun and creative. It’s entirely Lita’s idea and I’m a little miffed I did not come up with it myself. Then again, it’s just a Lita sort of post, isn’t it? And I gotta say, it was a blast to put together. I’m really psyched Lita thought of me for this! Thank you Lita.

You can’t save me, yeah, yeah

You call it love, but still you hate me? Yeah, yeah

Lord, I try and I can’t say no

You’re the pain and the medicine

One taste and I’m numb again

You can’t save me, yeah, yeah

Lord, I try and I can’t say no

Save My Soul By Jojo

Although this is the first set of lyrics, it’s the last I manage to answer. I think it’s because I have a very puny repertoire of romance anime and no patience for toxic relationships. In any case, the only thing that came to mind is Skip Beat and I’m not entirely sure why. It’s not as if Kyoko was in particular need of saving or as if anyone was trying to for that matter.

But she does have a pretty unhealthy attachment to a guy who doesn’t deserve her. That’s the angle I’m going with here. I know that the manga goes a lot further than the anime and possibly isn’t all that representative of these lyrics but I think it still fits with the part that got adapted.

Across the eerie waters

A sad procession snaking down

The dry and deathly trail

And as my telescopic eye

Focused on the marching line

It settled on the fallen crown

Now covered with a veil

This is so pretty, and to me, it’s Berserk. Because what better way to describe Berserk than with pretty….

No but seriously, this idea of a fallen king and a betrayed hope that seeps through the lyrics is to me the core of Berserk and what I really liked about it. How the greatest highs and best intentions can crumble into themselves at surprisingly little provocation. It’s horrific and yet kind of pretty…

Takes more than a pill to numb the feeling

Bang, bang, no mercy for the healing

Oh, twenty dead without a fight, without a reason

All tryin’ to win a war without a meaning

World On Fire By Daughtry

Man, Lita sure has some cheery lyrics. I actually latched on to the most obvious here and decided to go for Psycho Pass at the mention of a cop car. It may sound very superficial but it’s actually the last line that sealed the deal. “The trying to win a war without meaning part”.

One of the things I always found particularly impactful about Psycho Pass is that in the end, Akane chooses to preserve the status quo. Everything, all the deaths and loss that happens in the course of the series, is effectively for nothing. And to me, that made it even more meaningful. Sounds stupid I know. I reread that line and wondered if I should calm down on the drinking a bit. But still, it means something to me if no one else.

I don’t need to be the lightning or the thunder

But I need to know you’re really going under

So can you kiss me like you’re diving in deep and I’m water? (I’m water)

Well now! Spicy!. Out of left field but I got some Touken Ranbu Hanamaru vibes of that. Hanamaru deserves more love than it got.

It’s a silly and ultimately happy series which is what I get from these lyrics as well but it has a veneer of bluster. That’s where I’m getting the thunder from. As for the I want you bad part. Uhm I dunno, I guess I just didn’t think about that part. Hehe… nothing to see here.

Talkin’ in the mission

Over coffee, this is my utopia

Then, I’ll be your lady

As the ocean rises, the sun is fading

I think I’ll have to go with Code Geass on this one. Lelouche sure had a way with the ladies and I remember thinking at one point that a lot of the leading female characters like CC and Kallen would have been pretty happy just by getting a bit more of his attention regardless of the huge war raging outside.

I also think that it’s the little moments that made the show more powerful. The coffee breaks if you well. The times the kids were just being goofy kids at school is the contrast that made everything ales so visceral.

Tears on the sleeve of a man, don’t want to be a boy today

I heard the eternal footman, bought himself a bike to race

And Greg he writes letters and burns his CDs

They say you were something in those formative years

Well, hold onto nothing as fast as you can

This was a very unique song, really authentic in it’s presentation. Already you have impressed me with your taste in music Irina. I love unusual lyrics as well, a lot of your songs stumped me to think of a series ahaha. I used the third and last line as inspiration, and reminded me of Masami Kondou from After The Rain. Beautiful series about life being uncomfortable, drowning on things we never fulfilled for ourselves, regretting. Trying to distract ourselves from the main problem in front of us. “Greg writes his letters and burns his CD’s” made me think about Masami’s love of literature but also how it drove a wedge in his life also. Not till later becoming acquainted with Akira, he sees himself in her and vice versa for Akira. Masami has a regret of not giving his writing a full chance and regaining that old passion, leads him to have a better outlook on life. Hence the lyrics “pretty good year” I felt rounded that note off nicely.

Do you let them down, gently?

Does it only make it harder?

To let the feeling linger

To drag it out a little longer

Does it put your mind at ease?

But you’re the one who brought ’em here

Hate yourself by TV Girl

Again an interesting song here, I like the striking truth in these lyrics, Irina taking a stab where my lyrics choices were not uplifting either, some of them anyway. This song describes me leaving someone hanging or they are waiting for an answer. Instantly I thought of Nobou and Nana from Nana. If not most mentioned adult romance anime to watch and rawest: it is good. There are two Nana’s punk and girly Nana. Girly Nana in particular relates to these lyrics BIG TIME. Not cool to leave people hanging, that’s all I’m saying on that. If you know then you know what I’m saying. Nana is full of angst adulthood, Definitely worth a watch through!

Oh, how I love when it rains outside

And it’s okay to slow the ride

Discover books I forget about

And who will care for the world now


Ohh very nice acoustic track here with raspy vocal, perfect track for a rainy day, in bed and book. The delight of curiosity of Chitanda from Hyouka instantly sprung to my mind. “And who will care for the world now” describes Chitanda as having a buzzing mind of “she needs to know now” constantly bombarding lazy bum Oreki. Who doesn’t like to waste his precious energy. Chitanda cares about the mysteries she comes across that you wouldn’t, that are so minor. “Discover books I forgot about” reminded me of an episode where it focuses on a diary Chitanda’s Uncle left behind, how desperately it was important to her to solve the mystery. Hyouka is a fantastic slice of life with a mystery analytical focus on literature and mysteries that never make sense of the time: with an adorable cast of characters.

I got broads in Atlanta

Twistin’ dope, lean, and the Fanta

Credit cards and the scammers

Hittin’ off licks in the bando

Irina likes rap, NICE!! I don’t mind this rap track when it first came out. You are really trying to test my anime mind here. Going with your first gut instinct never fails right? The panda from Ranma 1/2 . It’s been forever since I’ve seen Ranma ½ but all I remember is Genma Satamoe Ranma father like his son is under a curse where he transforms into a panda. What’s the curse about? God I don’t remember haha. This 90s series seriously will have you laughing every episode, I remember it did for me.

And so Sally can wait

She knows it’s too late

As we’re walking on by

Her soul slides away

But don’t look back in anger

I heard you say

Don’t look back in anger – Oasis

Yass Oasis what a classic song. Ah love it. Witchblade. All these lyrics pointed straight to this Ecchi, fan service painted series. Which is true those elements are strongly referenced throughout the series but underneath I found in this series a long time ago a mother and daughter element to the story. That is emotionally gripping, of what would a mother not do for her child.

Oh intriguing. I’ve only seen Ranma out of Lita’s anime and I must say, it’s a perfect pick for Panda! There was something particularly unusual about reading how lyrics that are so familiar to me get interpreted through anime I know nothing about. It certainly made me want to see these shows.

This really was a fun post to put together. If any of you out there decide to steal this idea, I will read your posts! But maybe just give Lita credit. Since it was a great idea after all.

Ooh! I am glad I could make you curious about some of these series. Toko Ranbu and Berserk are only ones I have not seen. They have been on my list for a long time so definitely plan to see them one day, maybe this year?

Well think me and Irina deserve to put our feet up and have a glass after this! Thankyou muchly Irina for joining me on this collaboration!! If anyone wishes to try this out with another blogger, I recommend you do it’s really fun!! You can check out Miss Irina’s blog right here and have a great drunk time while your at it! Do hope to do another real soon with you, maybe one about drinking and anime haha.

Hope you enjoyed the read and I’ll see you in the next post!