It’s March. . . not just any march MECHA MARCH! I didn’t mention I would be participating did I oops? To kick off this annual tradition I must participate in, finally got off my lazy butt to tell you about a franchise of idols, space and mechas. That is soul pumping~!

Somewhere in the milky way eight years after events of Macross Frontier, The year is 2067 spreading fast with a vengeance throughout the galaxy: Var syndrome an ominous happening causing people to loose their minds and go on a rampage of violent. The only hope of counteraction, a group of idol girls known as walkure and the piloting squadron: Delta with the power of voice and machine to sooth and calm. Also oppose the interference from Windermere kingdom’s and squadron of Aerial Knights.

Mecha is a genre I’ve found not first thing on many new fans minds they will go looking into. If all they have heard about is dominance of Gundam, is it any wonder a lot of mecha shows are left in the shadows and undervalued? Mecha is more than about robots fighting all the time, the Macross franchise reflects upon this notion in memorising sense. This is my first time talking about Macross on the blog which shame shades over me for. The Macross franchise go back to 80s beginning with Super Dimension Fortress Macross and spanning across the years of various adaptations. Featuring on themes of war, love in a space setting. The best kind of space opera you will ever watch in your life. My first exposure was 2008 Macross Frontier, never had a series excited me quite like this did, singing idols the centre of attack during battle scenes using song, power of voice as a weapon. Along with some angsty love set in a deep galaxy. It was so exciting, riveting thereafter doing some research discovering a whole franchise existed.

Shoji Kawamori the creator of Macross franchise, also The Vision Of Esacflowne, Arjuna: The Earth Maiden, Aquarion to name favourites. This man’s concept direction is something that perfectly aligns with why mecha and romance are my two favourite genres especially combined together. Unknowing to him through his creations I’ve watched his main themes have become something constantly I’ll seek out for. For these reasons why he’s become one of my favourite creators within anime industry. The vision he created with Macross Franchise of love as helm and strong current of human bonds pushing forward the sails. I have yet to all his adaptations so far I’ve seen only Frontier, the original Macross and late last year: Macross Delta.

Macross Delta expresses the same memorising essences as predecessor Frontier before, eventually getting to see other adaptations, I’ll be able say the same thing on that note fully about them. The world of Delta, planets all look gorgeous, animation is fluid, bright and radiates particularly during space battle sequences or our sparkly singing squad spreading sparkles of positivity. In a previous post I was asked what anime world would I like to live in and Planet Ragna was my choice. The animation made sea and land scapes look so lush and inviting environment to live in, the cute bonus of catfish actually is a cat with a tail: adorable. The only expectation I had from Delta was beautiful animation because without it, you won’t feel the Macross magic when the girls sing, everything looking glamorous and exhilarating battles.

The two best things about Macross that I love are the songs and characters, after looking up other Macross series the same element exist of some on-going war, just that or alien race trying to take over. This part of Macross has never stood out to me but only the catchy melodies of angelic voices and fun-loving characters. The original roots of Lyn minmay paved way singing concept for Sheryl and Ranka from Macross Frontier driving the power of voice during the battles, elevating, giving strength to those around them. The girls of Walkure idol group invoked the same passion and heart whenever they sang in delta, always from a pure place. Freyja was my favourite voice as well being my favourite character overall, a sweet voice that knew how to connect with others especially young pilot Hayate. There wasn’t one song I didn’t love, the vary of high pumping and melodic melodies is wonderful. I have never dove much into anime like Love Live, singing girls sounds fun? But I think Macross concept is the idol singing I’ve found for me. Time taken to choosing those who will voice and sing these Macross characters is something to commend. Freyja voiced by Minori Suzuki was perfect fitting of Freyja personality, I’ll say the same thing about every girl practically haha.

The singing, musical aspect of Macross is unlike anything you’ll experience among space opera ocean, how does it make me feel? Happy, feeling alive and full of energy.

Things Did Slip and Slide 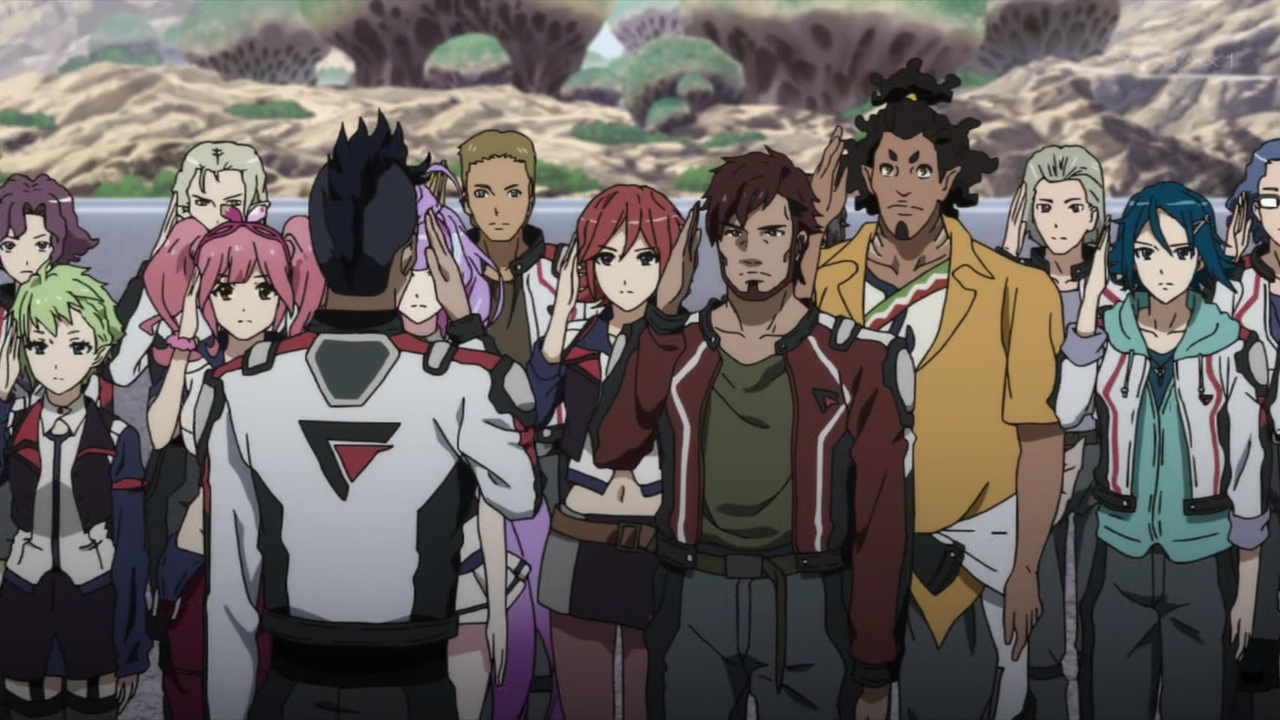 Musical and animation aspect of Macross Delta were top notch but not all worked for this series. The plot was a mash of a mess mostly in second half of series, by that point leading to a not a full satisfactory conclusion of enemies objective till the last second. A few twists thrown in caught me off guard at the end, made me keep watching but the aerial knights and kingdom of windemere as enemy was disappointing point of the series. Made no mass impact, felt cheap quick draw up idea for a “villain”. Though I felt some pity for some pawns that were part of an unhanded game so impact was minimal regarding enemy side of things. My emotional impact was for other side the walkure and delta squadron, seeping hidden reveals on their part made the plot not all fall to pieces. At one point sobbing silently for nothing I foresaw coming, then roasting at Delta for doing that to me. Just because an element in a series didn’t work doesn’t make it bad, Delta had me crying on three occasions. I could never say Delta is bad because it had other stardom elements that made me love it so much.

The entire cast was as I described Macross characters fun-loving, by Delta has the most energetic lot I’ve seen so far. Not all did I grown an attachment too, Kaname and Freyja are my favourites from girls, the other girls not much backstory for me to latch onto. Hayate as main male protagonist he was just alright for me, quite likeable protagonist, kind and supportive. But he has this defiant streak especially when not following orders, got old this trait after a while. His connection to Freyja was adorable, the two bounced off each nicely but Macross wouldn’t Macross without a romance focus. Hayate and Freyja whole time I had no idea where they were heading, the affection was there, I liked it kept me on my toes. The inclusion of a particular character forming a love triangle for a few episodes didn’t bother me, surprisingly the use of a love triangle used in a positive, encouraging sense on Freyja part. Not the usual merry go round here. It was a cute love triangle, haven’t said that in a long time. The romance element overall went where I thought, very endearing but would have loved for things to be realised much earlier on in the series though.

Fights and space battles in Delta were enjoyable enough but I know I enjoyed Frontiers battles more, the plot is held together more, the element of alien race I felt invested more in. Delta was stronger on the singing idol front than on fighting one. Still very entertaining and engaging fight sequences Delta had to offer. I love also how Delta referenced to Frontier throughout, acknowledging the original roots. 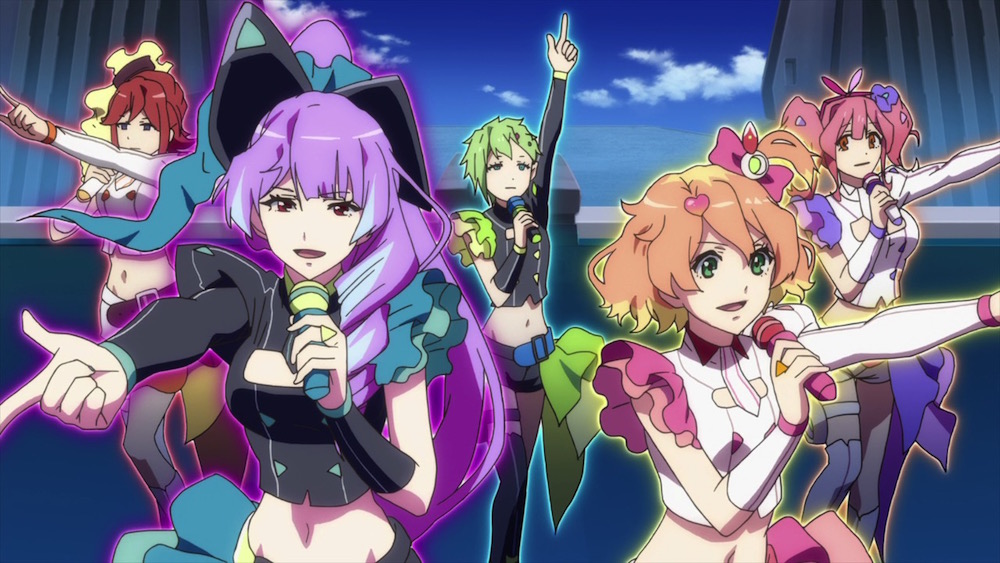 Macross Delta is wonky on a few elements but the most important as the most recent adaptation for Macross franchise; it’s represents and upholding that Macross Magic as those before. I feel Macross Delta has the franchise entering into a new direction where I’m going to be expecting high grade visuals, it is important. I really did love Delta the infectious walkure girls, delta squadron and memorising melodies will have me gladly coming back too for alone. The union of the two is exhilarating magic myself couldn’t put into words. Shoji Kawamori I think had some fun with Delta and bringing a modernised Macross for today.

I hope you have enjoyed if this is your first look into Macross world and definitely check out the original mind of Scott from Mechanical Anime Reviews who started Mecha March, Join the fun by clicking here

You’ll be seeing more Mecha March related post throughout whenever I am able!

You finally got the spotlight Macross Delta after me being lazy to write you until now! 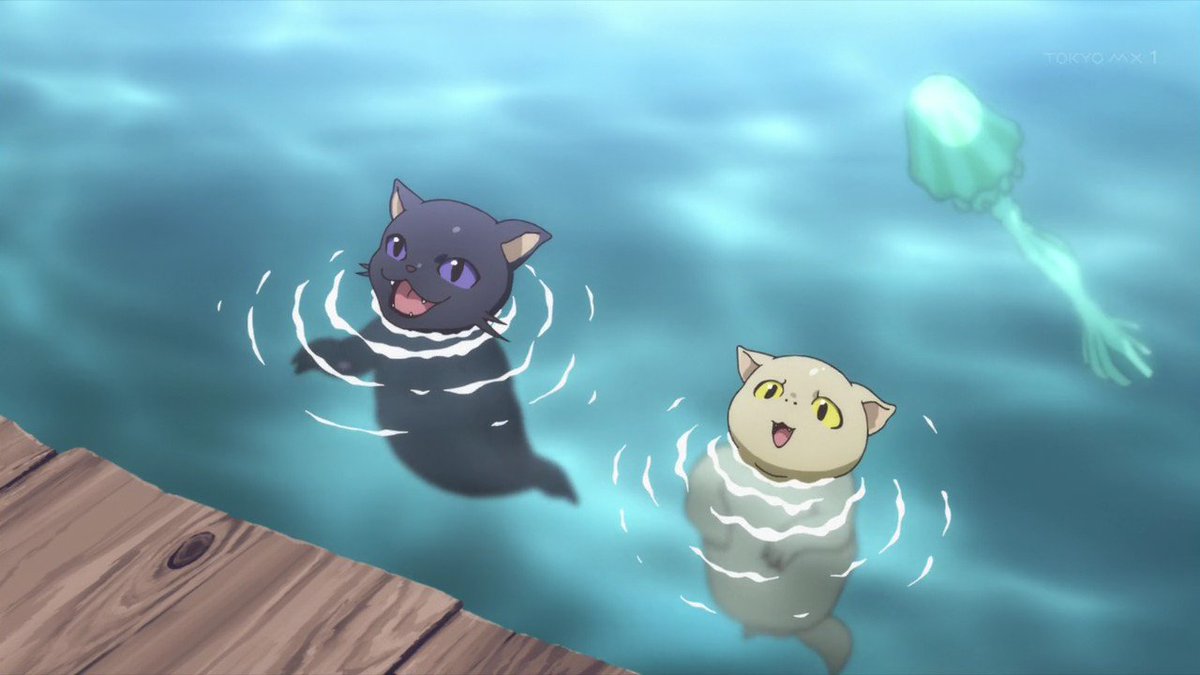 Look how cute the cat fish!!!!