I completely forgot its’ cash grab and mushy day tomorrow. . . this month is going too fast. Got me thinking for this year? What about those pairs on the side lines?

Trending couples above you at least know of within romance world of anime?

I love them. like the rest for different dynamics of what makes their relationship precious and touching.

Populous favourites like exampled above saturate the chance to highlight other pairs from different anime, not treated as the main stage. All the romance anime I’ve watched one thing has stuck out me, I root more for the sideline ones more. Maybe it’s because I’m tired of valentines making us unattached women feel the sideline brush? Maybe I feel sorry for under valued anime couples who remain in the shadow? I’m a sideline advocated then? Here are my 5 the sideline isn’t bad appreciated pairings, haha. 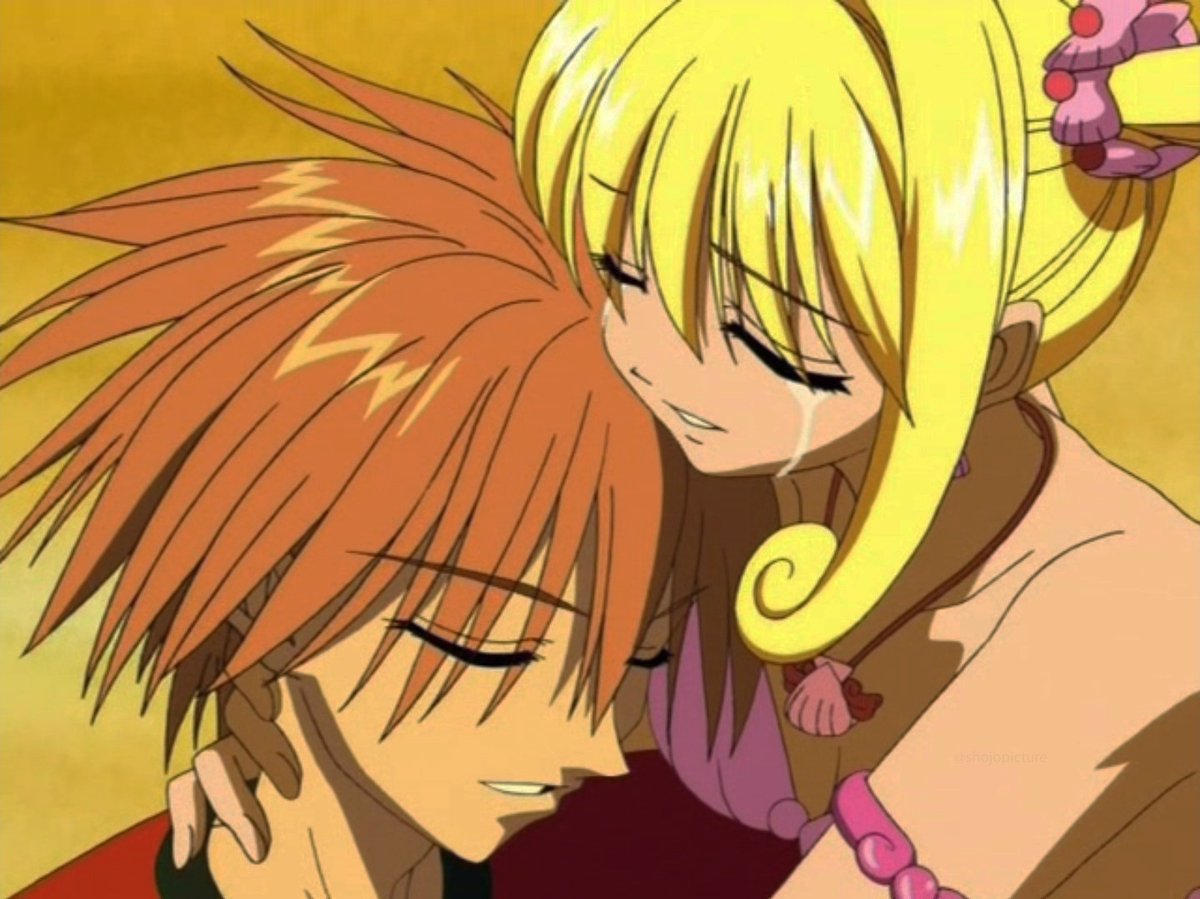 Oh how I wish I knew about this series back in my teens. Mermaid Melody is to feed your kids after they’ve gone through The Little Mermaid Saga. Even watching this till I was fourteen, the show has held a special place with me for one: Mermaids I’ve always had a fascination with and Luchia’s constant growing love for the boy she saved from falling off a boat at sea. She locked eyes on him, see the Ariel inspiration there and reunited in their teen hood. The guy doesn’t know it’s her. How could he not realise the devotion Lucha has for him while kicking sea butt with singing addicting melodies. The shows leaves near the climax Kaito remembering Luchia is the pearl of his life but leading up to that moment, Luchia constantly puts her heart out there for Kaito. Luchia facing love on the solo front for a good chunk of the series made me cry salty tears for the dear but her love for Kaito was unchanged. A simple teenage girl/mermaid princess crushing on her chosen human. The pair are teenage cuteness that remind you once had or are going to experience, I still love them so much even now. 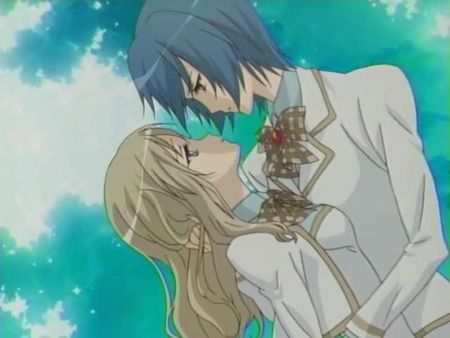 Strawberry Panic that takes me back: my very first yuri anime. Something desperately need to revisit because my memory of what happens is slightly blurry. Although Hikari and Amane made part of this series not forgettable after all this time, can you sense here how long I’ve been watching anime? haha. Turquoise Amane she is a prince babe, she got me flustered whenever she appeared. I don’t doubt that won’t not happened even now. Hikari and Amane had a tough time even getting a chance to talk, Amane the white prince beloved by female masses. Making her feel untouchable to Hikari sending her to the wretched sidelines. Female fawning like that really is a confidence flattener, the intimate, close moments the girls share reaffirms either’s secret affections and increase in every encounter. It’s kind of intoxicating to watch in a good way, Amane should be know as instead, “The angel swoon”. My favourite Yuri couple ever. 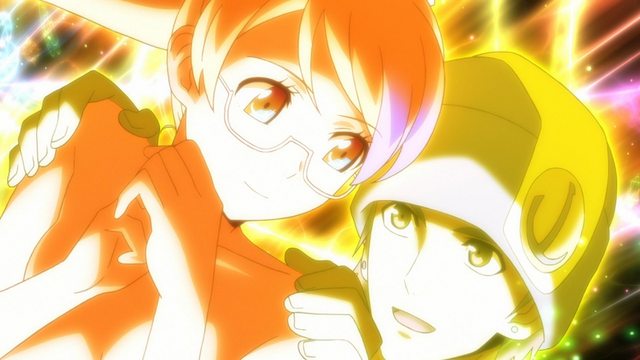 I dug myself a hole and you filled it. Mix and Andy elemental power really gave away in the beginning the fate for these two. Sounds cheesy at the start but at the end, god becomes really meaningful. Mix your is you’re average anti male lover who does not believe men are required to be apart of the process to make robot Aquarion work. Andy’s constant holes popping up everywhere wedges his own special place with mix. Fate decided to be an unexpected douche and ‘swapping roles’ for the pair causing a massive distant. That doesn’t make sense what I just said? It will if you watch the show because it’s a twister testing the pair’s limits on the themes of acceptance. Mix is a feisty female to deal with but Andy’s calm demeanour counter acts that creating some hot chemistry. The pair fill one another’s hollow they had sat there in for so long. 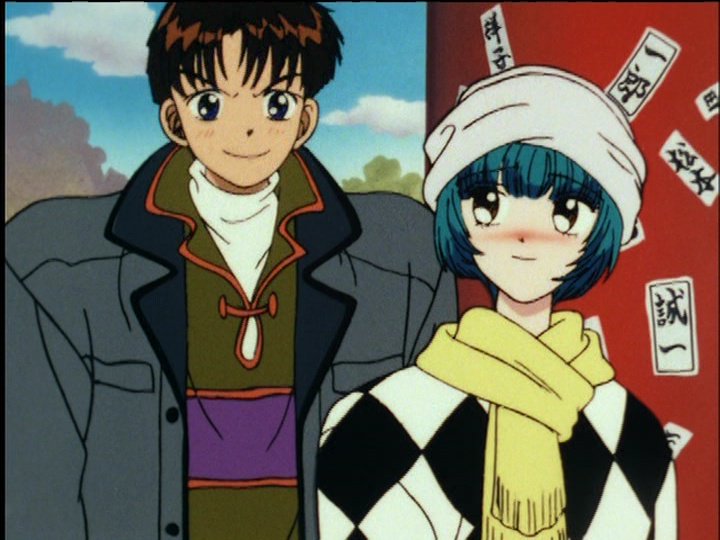 He hurt her past tense then was too late reaching high school to get his best friend. She chased her Ex to get back what they had but she was too late. Ginta and Arimi are your classic unrequited victims of love but you don’t feel sorry for them. They both we’re after Miki and Yu, but for their past mistakes, a second chance wasn’t happening. Then basking in pity, the two find a spark between them but logical says you’re not going to get behind a pathetic pair. Stripping things back, Arimi and Ginta share the same sweet nature, similar flaws but both bettering one another’s confidence. Ginta becomes more assertive and Arimi lets the walls of vulnerable show. The two become a really good fit for opposite sides of confidence they possess and found myself falling for the pair. Even those who made mistakes or became broken hearted from the sidelines can find happiness.

1. Margery And Keisaku (Shakugan no Shana) 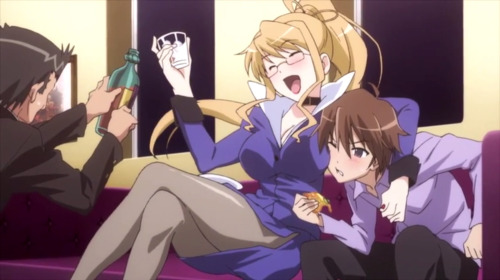 Loud mouth drunks who can cast you into oblivion are really dangerous. Margery is one of my favourite characters from Shakugan No Shana, a blast of entertainment and fiery personality. All that pent up fire runs out at some point that had been fuelling her for painstaking revenge, she’d been sinking. She brought highschoolers Eita and Keisaku into her revenge mess but something she becomes grateful later on. Keisaku is one that grows closet to Margery but not for her busty cleavage. The trio share a mutual feeling of abandonment and lack of belief from others, building a negative mindset they won’t amount to much out of their existence. Margery constant steam roll to seek revenge lights a tiny fire in Keisaku and becoming more willing to partake in Margery hell fire saga. I loved through the three season the strong bond Keisaku and Margery had formed, it would have been fine to leave there. But the series had other plans, Margery is never vocally expressive of her feelings but her actions spoke, Something tips over and out of nowhere a bashful Margery appears. Bringing a more personal intimate closeness for her relationship with Keisaku, the timing of it all is perfect. Adult cute I love for this pair.

Tell me who are youre’ sidelined couples you love that aren’t ones trending?

Inspiration for this post goes to Ren over at Tea Time on her piece about growth and love but incorporating examples from anime and manga. It’s a beautiful piece with a lot of points I closely resonated with on their views, you need to check her out!

Hope you all have a nice valentines however you are spending mine is as told above and telling my friends I love them!!