First post of 2021!! I wanted to start off with comfort though I’m feeling cautious this time of new years, but those in other hemispheres, this is a perfect watch for you right now!~

First completed anime of 2021 is setting my year off to a comforting start. Currently 75F here in aussie land, the boiling season is official now. Here I am thinking about those minus degrees nights by a toasty fire with some melting marsh mellows. During the holiday period I went through a blitz period of watching whatever and among the random, I started Laid-Back Camp. Had been a long while since watching a slice of life pace series, it was apart of my December watch plans which I forgot I wrote that post ahaha. I believe in saving particular series for perfect occasion, December mixed with toasty comfort around a Laid Back Camp fire were made for each other.

If someone were to tell me right now Laid-Back Camp is a boring slice of life. . . I get to use the line “Fight Me Bro”. Slice Of Life just knows to leave me reminiscing of the importance in small things of life and fond memories, it’s what truly best about this genre. Laid-Back Camp was reminiscing comfort of cuteness and made me hungry every episode, like real hungry. I’m not surprised with the series on-going popularity receiving a second season this January, a tv drama and TV anime short debuting last year and NOW A GAME. Not since Amanchu, Laid back camp has not me this buzzed and excited for slice of life genre.

I truly took my time with this series watching an episode during lunch time over two weeks. Series like this I don’t ever binge because they possess a strange lure to want to watch in single sessions only. Maybe if I had binged, sure I would have felt comfort but that couldn’t describe the level of cozy I feel after completing it now. For that I recommend you watch during once a day during breakfast or lunch, trust me. Though prepare for growling hunger, camp side food has never looked so yummy only the great power of anime god could make this so. 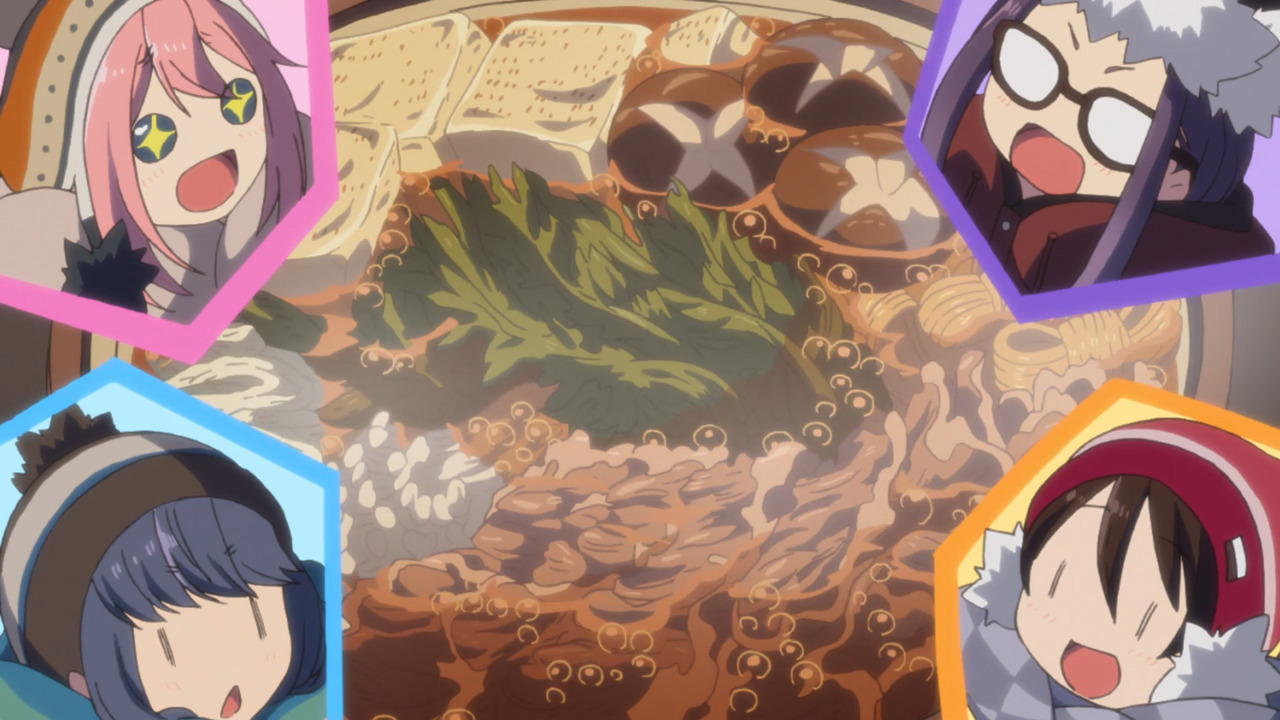 Episode 11 everyone goes on a Christmas Camp and Aoi makes Sukiyaki, a beef classic Japanese Hotpot.  I never realised there were so many different hotpots till I saw this, last year I had my first hotpot at a friends house. Something I had dreamed of experiencing and it was delicious, officially became a lover of Tofu because of as well. The girls whipped up some truly hot, drooling food that has you salivating, despite the warm climate I live in, that wouldn’t stop me devouring hot pot anytime. Nadeshiko was hidden food beast among the group as Rin comments she has a beast inside her belly. Nadeshiko stole my heart, she is foodie me, I love my food. If I’m going out for just dumplings alone, my inner Nadeshiko will show.

My anime store had this in stock last I went before xmas, now. . . I MUST HAVE!

The food wasn’t only salivating factor but camp site ground scenery. That really took me back to my first time camping experience, which was fun but not with some unexpected back luck. Being surrounded by pine forest, just nature itself is magical in a camping setting, you can’t know that till you’ve experienced itself. But next time round I think I would do what is known as glamping (been around since 16th century) which is a thing in Aussie land, still camping just with some luxury. Laid-Back Camp relays back to real life sites in Japan, I love this aspect about anime, most fun educational way. I certainly learned a few things about camping like there are three different types of camping mats with various purposes? what? Another thing a hobby like camping about as expensive as manga collecting or any hobby. Any hobby is expensive people, that will remind you.

The humour in Laid Back Camp was subtle as I’ve seen in other slow paced, slice of life but it was a crack up and endearing. The girls themselves are just endearing camp darlings, especially Rin. She reminds me a lot of someone I know which made watching her even funnier. Nadeshiko starry-eyed reaction to anything food had me reaching lung capacity and anything else the girls were doing camp related was stupid cute. Laid-Back Camp was truly dedicated to it’s theme, sparking new interest of going camping in the future sometime. When something sticks to what it knows, these kind of anime make for the most wholesome of all to invest yourself in, Laid Back Camp did that.

To fill the void:

Hope you do check out this wholesome slice of life and stoked the timing as season 2 airs this month, now THAT is worth a weekly watch. I really enjoyed writing this write up and look forward to more anime talk!