“Maybe even Yakuza can’t be that bad”

My weekend plans were suddenly thwarted thanks to a special access from Sentai Filmworks, for pleasing price of $12 to first part of Twittering Birds Never Fly trilogy.

Trying to recall the last boys love I watched, been a long while. The anime Given that was last year, oops. Sentai Filmworks swooned me over with having early access to first movie of Twittering Birds Never Fly trilogy a boys love favourite among the genre I’ve noticed in the past year. Only select countries had access and I really this time didn’t want to pass up the chance. The more boys love anime popping up over last few years, I think is wonderful for genre and you cherish that fact more. This was a complete blind watch, reading plot briefly all I knew was Yakuza and Banana Fish relations here.

As a fan of boys love genre like many, we’re aware of the problematic elements in stories about male characters relationships that pop up at lot. Every genre has it’s area of problematic somewhere, if everything was kept tame and light that’s catering to one audience preference. I like genres to cater to all audiences even though that is not end goal for authors I’ve come to find. They are putting out their fiction works for different outset reasoning, whether it is liked or disliked. There is no pleasing all the masses but Twittering Birds Never Fly is quite the popular phenomena considering it’s cut throat themes that would trigger a lot under the sun.

The manga is well-loved but I’ve never read the manga, if you’re seeking for manga comparison you won’t find here. Twittering Birds Never Fly first movie was a daunting to watch, confronting some truly raw themes that didn’t just dig deep but laid so transparently. I did not dislike this fact, first five minutes in and “oh boy” kept repeating in my head, what was about to commence. Victims of broken Yashiro and Chikara became through seperate incidents of abuse and witnessing traumatic event. Their relationship is interestingly dynamic and complex, one of the best fascination in a relationship I’ve seen in a long while. Feels so weird to describe the twos relationship as ‘interesting’ considering damaged parts of theirselves and just finding a way to go on.

When I say ‘interesting’ Yashiro and Chikara relationship: their interactions and conversations together. Yashiro top Yakuza boss is probably the most detached and unfamiliar out of two, suffering prolonged  time of sexual abuse turned him into masochist. Yashiro’s kind of high is participating in many different sexual acts, having pain inflicted, even being watched. It’s foreign to Yashiro of being emotional with others, all the time presenting polite and full of light humour. Apart of his self dense mechanism mask to avoid forming any attachment but doesn’t mean somewhere among himself: he does not wish for it. Yashiro is like a kid trying to count to 5 for first time, in how where would he even start, for fear of it all is too overwhelming.

I like that Yashiro is not without some bond least to his long time friend Kageyama but that holds a feeling that forced close Yashiro to anyone even more. Chikara is docile and not much of talker at heart, becoming Yashiro latest body guard, the clash of his and Yashiro personalities is intriguing chemistry. The pairs collision of intimate insults flung back and forth is weird at first but I found really funny, later learning a close warmth was lingering behind it. I don’t know after seeing first film why Yashiro has taken a shine to Chikara. Yashiro expressed Chikara is his type and Chikara holy accepts Yashiro as he is, It’s a mystery at the moment to me.

Chikara is docile lug of hotness I would not pass up but he is an unlucky individual witnessing something you would never want to. Resulting in Chikara becoming excessively self conscious which I’m not spoiling. It adds a close intimate factor with Yashiro that Chikara has begun to work through and developing curiosity on my part: if Chikara can overcome for himself. Yashiro and Chikara relationship is an extremely interesting dynamic but that still feels so weird to say, for how sad I do feel for both of them. Yashiro character has me most conflicted on how to feel about, I feel sad for but also admiration. (Though I feel Yashiro reluctantly feels) but accepted the way he is now, nor concerned others around him. It is disheartening, inside of Yashiro I bet it’s a hurricane constantly screaming out. 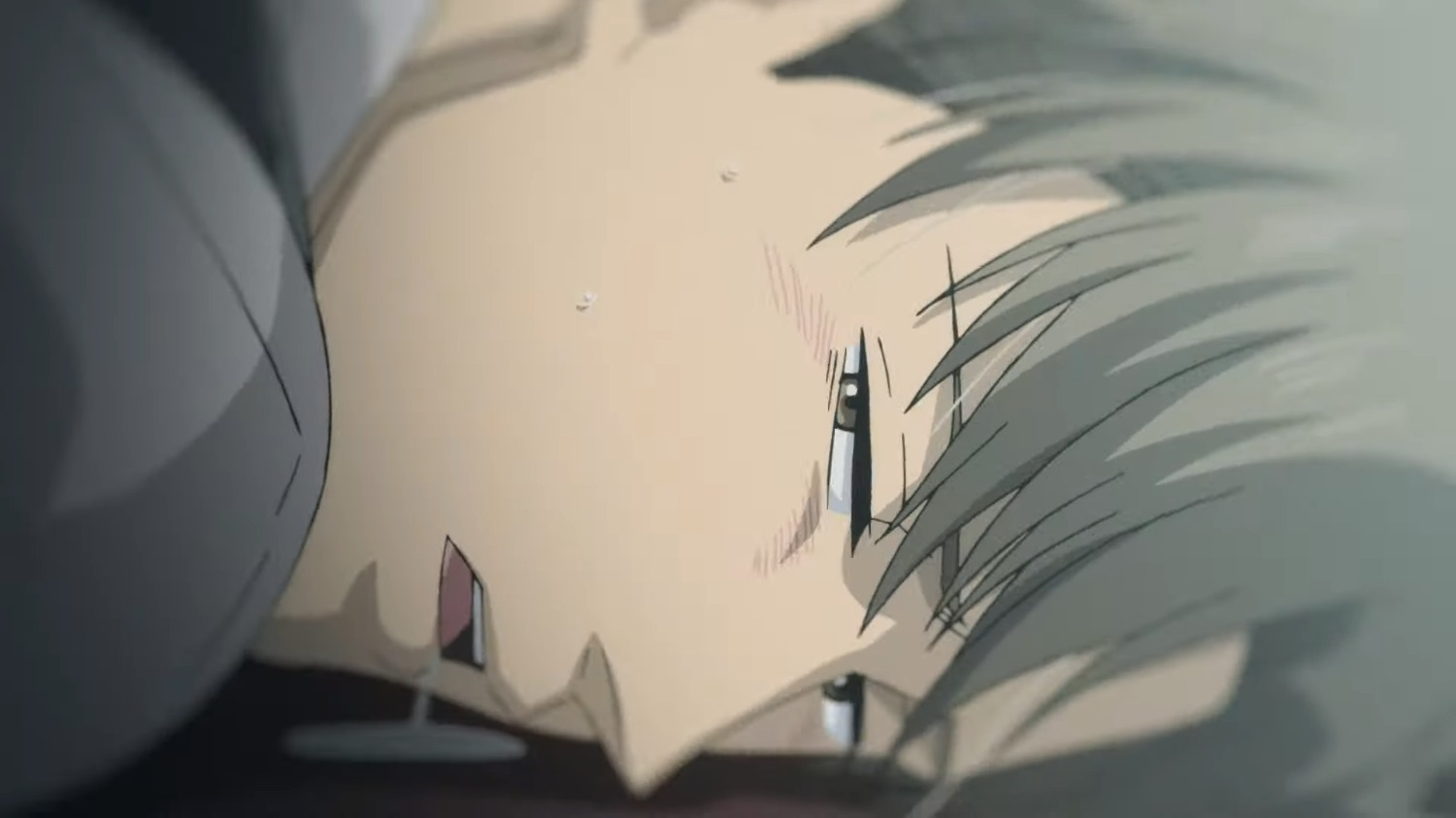 Twittering Birds Never Fly was not shy, unrestrained and raunchy in how many explicit scenes there were. You don’t see manly bits at any time and only containing a handful of sexual spice scenes but smut levels were off the chart, catching me off guard. Particular scenes like this involving Yashiro painted divided picture of person Yashiro has become and how tragically twisted it all looks. Yashiro is not some lost cause in my eyes, he is terribly wounded on inside that you couldn’t image the yearning to not be the way he is. Yashiro reminded me so much of Ash from Banana Fish but Yashiro I don’t feel has gone over the deep end yet. A small light remains for Yashiro. If you have not seen Banana Fish, you need to be prepared that is all I’m saying.

Now Chikara as Yashiro bodyguard. . . he has special catering requirements at Yashiro request. Chikara obediently follows the requests but revealing sensitive topic here for Chikara which again I’m not going to reveal. Blank face Chikara wears majority of time but tiny moments during film he is doting on Yashiro, angry really made me like his character more. Those precious glimmers of silent giants really get to you, I really don’t know why that is. But it’s precious. I thought animation by Grizzly and Blue Lynx made this film have an air of seduction and class, absolutely loved. Perfect for a lower bar setting of Yakuza world where everyone plays dirty and getting out of kind of group is next to impossible. Joining Yakuza is like making the deal with devil. No-one is your friend. This tone was solid throughout the film and backed up this gruelling story. I liked learning that we have an official company producing boys love movies specifically from Blue Lynx, this makes me excited something dedicate just for boys love.

This was some Boys Love anime compared to others I’ve seen yet, I honestly couldn’t believe how solid everything was. Also the raunchy, grubby level of sexual explicit we got. There were a lot of pause taking and “oh my”. The severity and weight of themes, abuse, physiological were transparent throughout, not glossed over as looking pretty. Showing the ugly which is daunting but the key to why everything about this boys love story holds so strong and complexity of it all. “

Banana Fish is a clever shojo I said once, Twittering Birds Never Fly is just as clever.

I cannot wait to see how things unfold because film decided to be a douche and leave me on a cliffhanger but it was a good one. ah still. I definitely wish to read the manga now but it’s hard to get ahold of from June Manga so looks like I’ll be going digital to read instead. Hope you got from my thoughts that this boys love won’t be for everyone but in my case as you get older, you want solid stories with some dark angst.

You can still watch the film till this Friday 18th, pay small fee of $12 and away you go. Check country list if you have access here

Writing this was out of the blue and case of I loved this so much, My thoughts are overflowing here. Hope you enjoyed the read!