Free has been on my mind recently probably because summer is showing early signs of surfacing. Finally urged me to watch precious boys youth that I know was going to kill me.

Sometimes I wonder besides the idea to make money of course, what Kyoto Animation attentions were for Free. A very judged series for seemingly relying on fan service exposure and nothing more. Apart from my own personal attachment to the series, Free revealed to be beyond what others had critiqued it for on surface. I’ve wrote before Free mastery with music instrumentals as series best attribute.  Watching 2015 High Speed – Starting Days reaffirmed the fact Free is more than what it’s judged for and pool of feelings I still don’t know what do with.

Free Starting Days takes inspiration from light novel for this anime film, focusing on Haruka and Makoto starting junior high together. Fellow class mate Asahi Shiina encourages the two to join schools swim club but Haruka is reluctant to idea of team work. Doesn’t take long for captain Natsuya Kirishima to convince them to join. Haruka, Makoto, Asahi and Natsuya’s brother Ikuya form a team to compete in medley relay but the boys have many kinks to work out before things can flow.

Starting a movie at 11pm thanks to a random spur is best feeling. Last year watching Free S3 was my last dosage of goodness so anticipation levels were very high. Only 15 seconds into the movie and. . I was reminded how Free introduction starts are immersing. Season one first episode introduction the instrumental track “A boy in the water” plays along with Haruka’s opening words how water and swimming make him feel. That together was something beautiful, everything about it was. Then after to each new season you get the same deliverance. To starting days first scene introductions were most immersed I’ve felt. Every angle of Haru about to enter the water was clean, musically Free is a master at, such soft tonnage instrumentals rolling into a more pick up beat. May not seem special a boy about to dive into the water here but encompassing angles, music it reflected of adolescent Haru’s love for water. Knowing you’re about to see young roots from where boys manifested from. A window into sweet male youth. 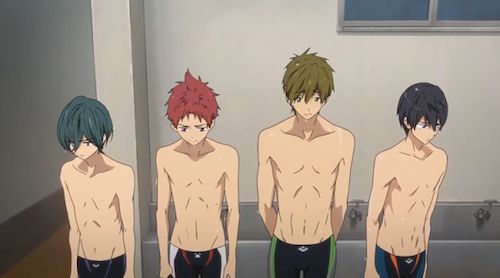 This was nearly a 2 hour movie without me even realising. You know when something is going to kill you inside, the free babies starting out how to paddle. At every turn, every young masculine face had me covering my hands over my mouth, gasping throughout the whole thing. No other anime with purely male cast has ever got me feeling giddy and 100% behind. Each one has so much personality but Haru out of everyone people mark as questionable, the guy who will only swim free style and is selfish. Compared to seeing him in season one, younger Haru is way more guarded especially towards others, even Makoto. This movie truly shows how far Haru through the seasons has grown less guarded and more accepting of his surroundings and others, it’s something I had wanted to see for so long. It’s a blessing this film was made to be able to see how narcissistic Haru has toned down. Haru might not be first on people’s favourites list but I’ve grown quite attached and broadening of his personality.

I think the film did a splendid displaying on theme of team work of our young work in progress male swimmers team. All the boys were individually so absorbed with their own selfish bubbles to see downturn in their team progression. As they say: There is no I in team only we. Everybody was given great individual focus which is something I’m all about when it comes to characters. The hurdle of everyone getting to become one team for medley relay had me gaspingly on the edge, the sentimental of male youth is stretched to the limit. All the stops are pulled out to make you feel, feels till you’ve reached capacity.

One of my favourite moments from film that examples till I reached my own limit. Makoto was in a debate within himself his reason for joining the club for haru sake? or because he loved swimming?. Makoto ends up exhausting himself and becoming someone Haru doesn’t know. Haru and Makoto have a confrontation, Haru expresses his anxiety and says a small sentence which makes something well up inside Makoto.

Those worried eyes of Haru, ugh break me why don’t you. Reflecting on a carefree moment where there was no questioning his love of both things Haru and swimming. The track “My True Self” playing in the background with majestic rhapsody solidified everything in that moment. Afterward racing to the pool and scenes of two swimming together is so tenderly warm. I was crying tears of joy here. Just one of many male adolescent moment within this movie. Oh of course one of my other favourites when boys smash it at medley relay, again crying. Think all I did throughout was cry for feeling of joy, which has been long time since I did.

Who was best boy this time?

Oh be stole my heart. Asahi just shone in this movie, little pocket rocket. During season 3 I only had a minor attachment to him but after this he’s become a favourite. Full of so much pizazz and energy, so infectious. He is a wonderful character, a necessity presence as part of the team.

Hehe. Younger Kisumi is just as mischievous as older one. He was a blast!

Movies like Free Starting Days are not times to be overanalysing things for me. They are to splurge in the pure enjoyment and never ending happiness this anime franchise and film gave me. Male adolescence at it’s most dangerous I’ve seen yet haha. If you are a Free fan and have not seen yet, ah my advice save it for late at night if you are in need of pick me up.

Young Natsuya also was a godly highlight too. *drools a little*

Hope you enjoyed the read, glad I got to squeeze in writing this as I’m currently writing posts for my December event!

P.S Why does Free destroy me every time?