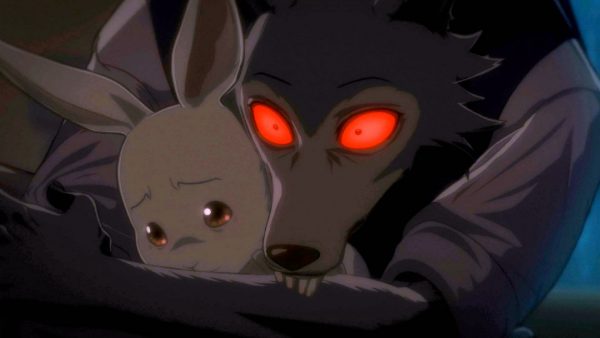 The newest anime isn’t something I go out of my way to watch first. Hype is usually the cause but sometimes the hype is worth it, an occasion such as here for Beastars.

Beastars initially had no interest in, there should have been though. A show about animals and I’m a huge animal lover but the teaser trailers and hype didn’t grip me. Beastars falls into the category “you don’t expect much” and looks weird. Talk fast brought up this is for the “furry” lovers but people’s prejudgement the show was beating down in no time. Lucky I was in a mood with all going on to just dive in and like to apologise to Beastars for not jumping on this sooner. Things begin with Legoish’s friend Tem the Alpaca murdered and devoured on campus grounds, sprouting tension, distrust between herbivores and carnivores.

I never thought myself would be watching a series aside David Attenborough’s documentaries on the animal kingdom group divides in animation form, not to the extend Beastars take it. The social break between Herbivores and carnivores is transferred through heavy character dialogue, and every one has a burden to bare – not by choice. Some intricate thinking was concocted here each specie had their own place, example: the wolves have a dedicated room to rejuvenate with an artificial moon above. Mean that is a cool element distinguishing this specie divide. This world takes itself seriously, a scene Legoish and Haru are arguing, the police intervening straight up to arrest any unrest. Every society needs regulations, rules otherwise things would collapse straight fact, in our case here that’s amped up by ten fold.

Underneath the promise of truce between Herbivores and carnivores rides on damned emptiness to console those who need that reassurance. In this world the undersurface is more corrupt than blind sighted fools could imagine. I love how effective Beastars establishes the ‘smoke and mirrors’ effect to the true reality but bringing my curious how characters trying to break away from fake peace – what lengths will be taken to do this. 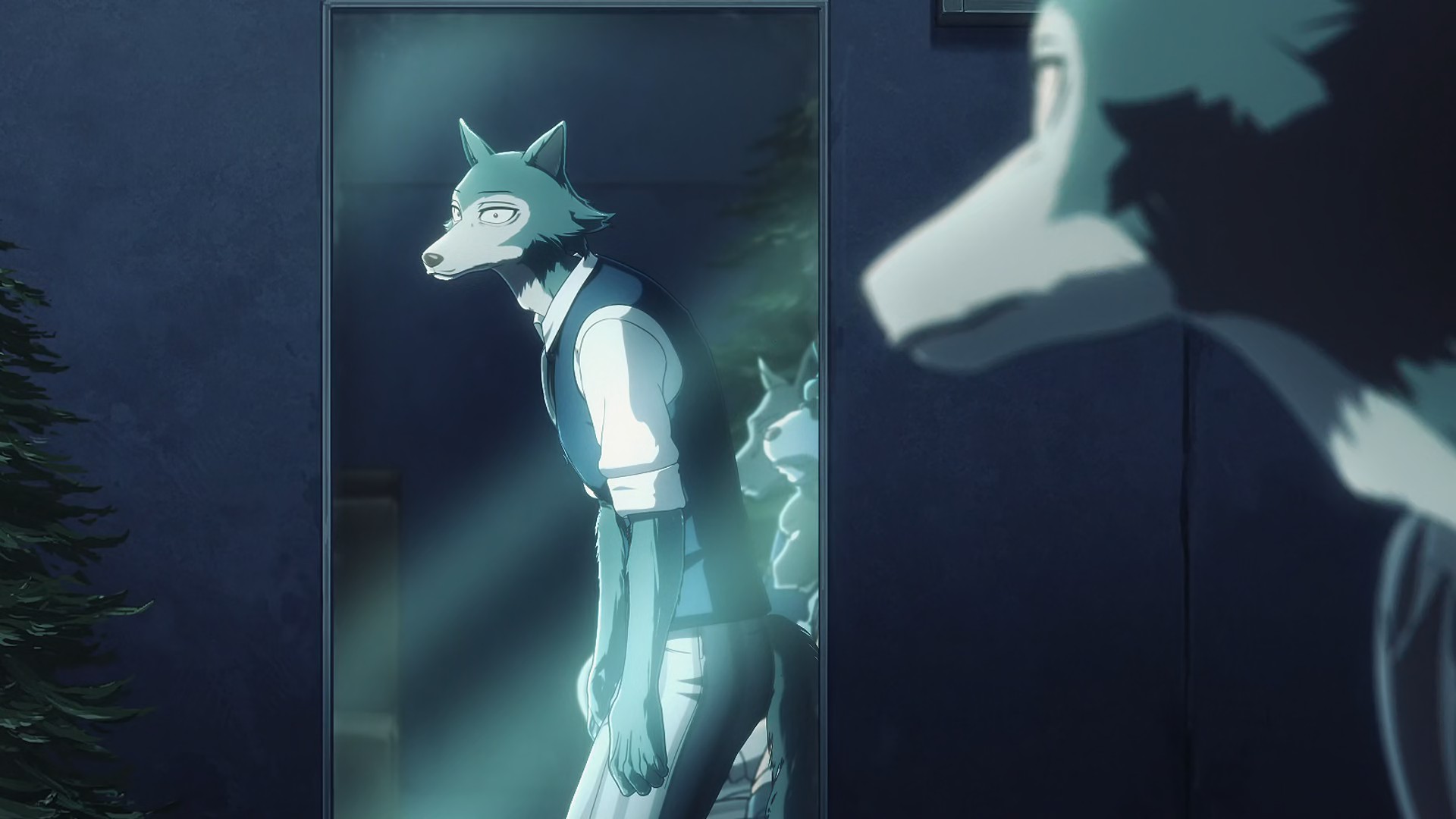 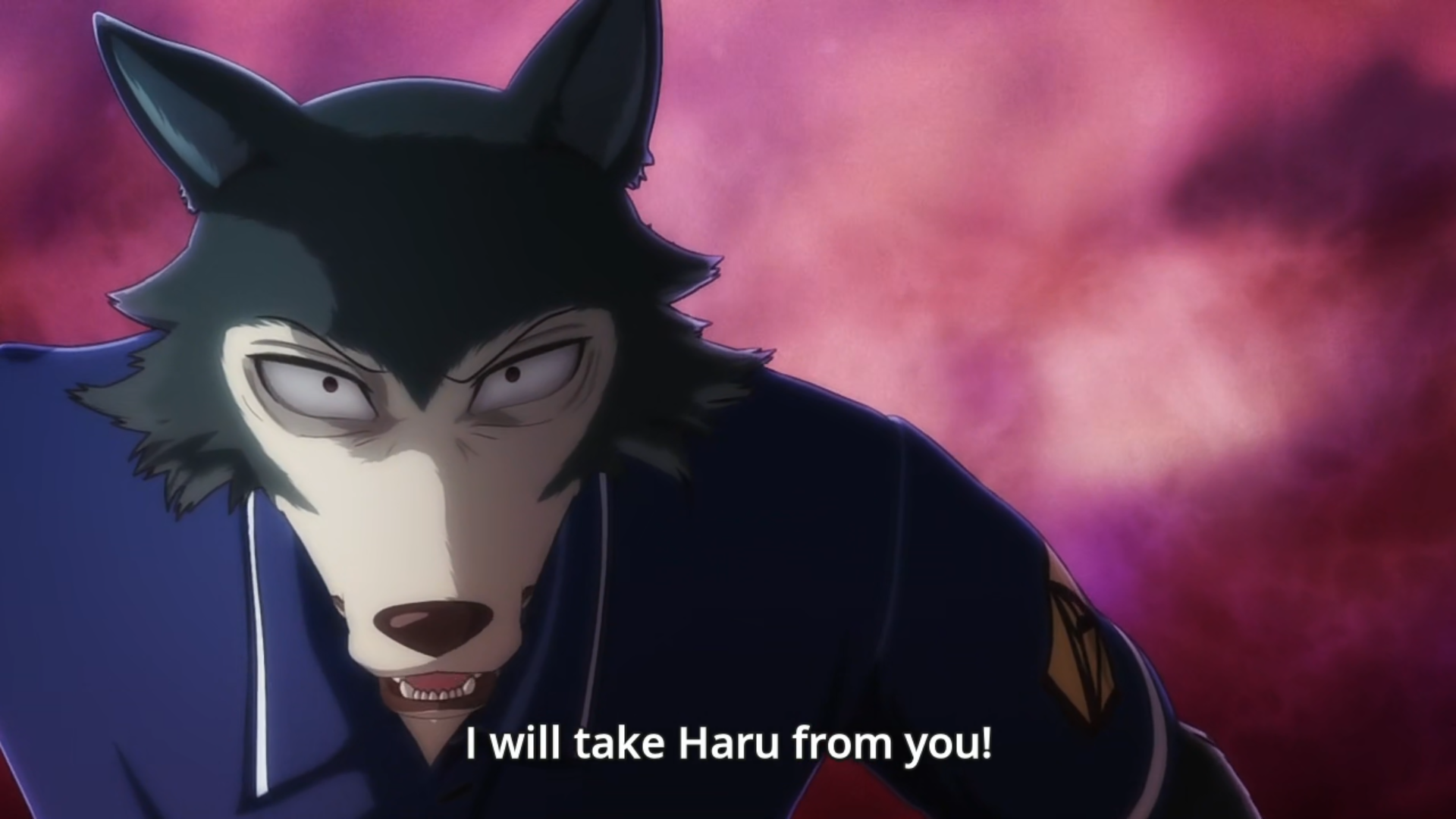 Natural instinct is always treated as a positive but Beastars expands this term complexly through it’s characters. Establishing the social order and smack with natural tendencies are complicated here and suck from our characters perspective. Legoish refers to this most out of anyone here. While every characters inner physiological is explored and turning heads including mine in an interesting, good way. I just knew Legoish perspective would grip me.

Be cool to know a real life Dr Doolittle translating animal talk for us, be the closest we’d get to in this life. Wondering what goes through little critters minds, if they really enjoyed feeding on automated 24/7 of the same thing. How do they feel inside? Would you get programmed answers because of natural order of “yes”? Hey I’m not a weirdo here just one of those childhood thoughts that’s never left me. I feel like first time Beastars has tapped into that fascination. The ‘inner mode turmoil’ I call it, an individual who has a power or being inside they cannot control, Moka from Rosairo Vampire, Incarnates from To The Abandoned Sacred Beasts. Along these lines whether natural or scientific experimentation.

The wolf a primal predator in the carnivore world but broken down if the natural way wasn’t followed. Legoish’s character representation can’t fault in my eyes. Addressed over and over in his own mind you should not love a bunny. It’s truly fascinating watching Legoish’s carnivore self and passive, mannered self at odds, the feeling is introduced more complex than you imagine. Leogish is no saint, acknowledging his false mannerism towards others as a form of denial. Leogish keen pursue of his love interest Haru is full of complexity, uncharted waters where this taboo love could go. Shouldn’t go nowhere but despite the taboo, the series has enhanced such curiosity like I’ve never seen. The whole concept is wonderful.

Animation is only ever evolving and Orange studio is making my attention now. If you know Land of Lustrous, yet I have to see took anime world by storm for it’s 3D work. I had no idea Orange were massively apart of Beastars accomplishments, thanks to Canipa Effect helpful first breakdown into heart of strategic animation. I have a better understanding. I like youtube videos like this breaking down confusing inner workings such as animation. Also reading the interview anime news network did with main team for opening theme put in more perspective why 2D would have not worked for Beastars.

The opening theme, dolls are used with stop-motion and massive apart of the animation alone, is emotions of the performers, through stop motion and facial expressions – to give characters life. Many other factors play key role but truly was fascinating to learn part of the process, soon as I started watching, the animation was going to be first thing I’d research. Orange studio I will be paying more attention to you now.

Beastars If you plan to watch just go in blindly because it’s an experience. Ultimately what fascinated me the most was the handling of social hierarchy and making my childhood thought a reality – of what thoughts would run through animals if they talked?

A six-part series breaking down Beastars would be required, that MUCH was going on. Ah, anime keeps feeding us what is possible this time: inner psychological of animal kingdom and instinct tendencies. Let me also add instinct refers to hormones too, haha. The theme of instinct was not left untouched here.

Hope you enjoyed my main enjoyment points with Beastars and you all should jump in, turn on netflix!!

I’d love to know what others thoughts !! Finally got around churning my thoughts now just for rest of the series I’ve watched lately, haha.