I like saving these 3 reasons posts for series that I feel deserve the spotlight. Definitely had to pick one for Mecha march, of course. *Readers see it’s Gundam coverage* I see you all about to click off but just hold up here.

Gundam franchise the sole dominator among mecha, glorious to me but a deter for others who don’t like big bad robots. All the gundam series I’ve watched so far have been enjoyable (to me anyway) but Gundam plots get confusing and complex. I wondered for so long if there was one that was different. But you know? I wouldn’t be writing this post if I hadn’t found it. Finally get a chance to showcase this fun Gundam on the blog because what if I said had nothing to do with the typical gundam way? Now I might have your attention hey.

Mobile Fighter G Gundam is 49 episode crazy ride. Fun fact with Gundam series they follow the universal timeline. You can google it and comes in chronological order from first Gundam ever to most recent, if you wanted to see every Gundam in correct order. G Gundam isn’t aligned in timeline big advantage point for new comers into Gundam.  Set in a future universe where earth is a battleground for yearly tournament between countries, last standing winner has right to lead for a year then cycle begins. Every country has a representative using Gundam’s to battle one another. The main focus on Japanese representative pilot Domon using the tournament to search for his older brother accused stealing a secret government project, and leaving their parents to die.

G Gundam is a self contained own plot with a hysterical twist: Street fighter edition. No war in insight for you guys to get confused over as majority of the fights, apart of the tournament. Only exception is other half plot point, you have the tournament, focus on other contestants Domon comes to know. But other half is a strong focus on Domon and his background. The series has the balance accurate, leaving for the real mess till the end which left me satisfied. There are some great twists among the weirdness G Gundam possesses within plot. I was stumped throughout and quickly proved the outstretch of difference from other Gundams I’ve seen. You can jump in with ease. 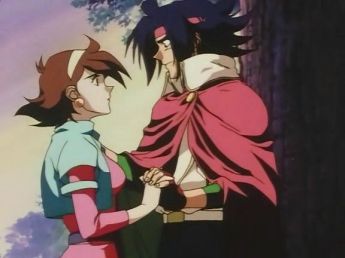 G Gundam surprised me throughout especially for character coverage. I’ve said before what I love most from a series is backstory, who doesn’t want that? A semi-big cast of characters and each dedicated opportunity to grow an attachment to. The plot and character were the helm for this Gundam but characters what did it for me. Especially the four pilots Domon befriends during the tournament. Each have their own agenda for winning and explored largely the behind scenes reasoning of these guys. Together with Domon their a bunch of goofs, Chibodee boxer fanatic, Georges chivalry knight, Psy Sai Shi sixteen really twelve and Argo pirate. Their a laugh but their reason to fight are genuine, their good dudes you learn.

Domon and everyone start out rivals and series takes time to build a strongly male bond. Domon is the least warming but these new friendships, break down walls have remained shut for too long, just in time before Domon lost himself. If it weren’t these pilots and Domon’s childhood friend Rain supporting Domon, you wouldn’t be able to stand this hot head. Rest of supporting cast bring humility to Domon character, remaining the strong bull head would have let the series fall. Domon is an idiot, blinded fool to what’s important and his support shaped him into a likeable protagonist despite his flaws. I enjoyed Domon’s character transformation, becomes all more meaningful when reaching the show’s climax.

You know every series has a famous quote, scene, that becomes so memorable, like watching Goku unleash his kamehameha. It’s that situation here. Before starting G Gundam I was pre-warned of a particular attack that would get stuck in my head forever. Little did I know the impact until very first episode. SHINING FINGER Domon’s gundam’s sole attack is iconic throughout, it’s stupid, ridiculous but so funny. The whole attack sequence of Domon’s yelling proclamation followed by the mighty index finger of light has never left my brain. This might be a dumb as reason to put down here but it’s worth it people until you watch this.

There you go cut down into 3 chunks of why you should give G Gundam a try, it’s on crunchyroll now waiting for you to see the famous shining finger!! Out of gundam franchise this is main one so far I recommend people start out with!

Hope you enjoyed another mecha post !! and bless Scott over at Mechanical Anime Reviews also doing Mecha March doing self plugs of my stuff. You need to check out his stuff too, especially his reviews lot of work went into those!!