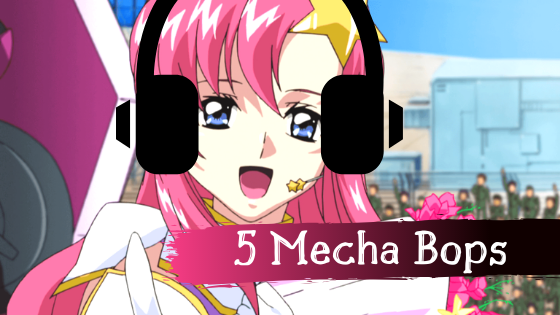 It’s March and I’m ready to redeem myself from last year’s Mecha March. I wasn’t happy with how my own turn out for this event, but this time I’m a little more prepared. You may have heard about this event for mecha from good friend Scott (Mechanical Anime Reviews) you’ll definitely want to check out what he has in store for this. He has some awesome mecha coverage lined up !!

Far as I know me and Scott are only ones doing this but that makes it interesting from both a male and female perspective you’ll get. From my end posts are will be scattered throughout March and as always random as ever. A whole month of focusing on mecha is everything to me, being my second favourite genre my jam indeed.

To begin things with a bop I wanted to share my long time favourite mecha openings. Something special rings out with mecha openings in particular, they are all gorgeous in their own way and set a pre excitement ablaze.

You all know my hidden secret here? I watched Gundam Seed Destiny before knowing Seed existed. No wonder I was confused by all the plot holes at the time but this Gundam is pretty special to me. The first Gundam I visited since Gundam Wing, the gates of excitement flooded open once again. This is first opening of Destiny has never been forgotten, my friend used to laugh at me getting up and dancing every time it came on. My legs just start moving on their own whenever I listen to it now. Also I discovering my long time favourite Japanese artist T.M revolution, Takanori Nishikawa has such a deep range in his vocals that encapsulated me listening to this opening. He brings the electric tingles every listen. This song is a great uplifter, it’s on my workout playlist.

Last year Mecha March I came out with a mecha/romance top 5 and surprised you all Escaflowne wasn’t top dog. Aquarion Evol knocked it off by a small margin purely because this series evoked connection of feelings and musical backings in a wholesome sense unlike the others. First opening is a killer uplifter every time but I just enjoy the second one more purely because Akino voice has more punch to this track. Although her vocals pack a punch every freaking time. Her constant after belts are killer and were perfect for Aquarion first season and Evol openings. I love this girls voice, so sad she hasn’t done many anime openings.

When you love all the openings of one franchise it’s hard. . . Not a surprise Full Metal Panic is on here. Fumoffu second season opening I always find myself singing in my poor Japanese pronunciation but like to think I’ve got the song down pat down. Did I say all the openings in this list would be actively upbeat? Fumoffu’s opening has a gorgeous melody that gets me swept up in it, a song that takes the uneasy away. Mikuni Shimokawa not a well-known Japanese artist but beautiful vocals, but to us fans of this military mania a treat she did all opening and closings for this franchise. She’s famous to us in this respect. If you’re feeling blue one time flick this pretty tune on and all the anxieties will melt away.

Fafner is now on Anime Lab. . . ready and waiting for me to rewatch this series. This is one of the most confusing mecha series I’ve watched and still love it. How is this possible? This is not a show for anyone who wants simple, Fafner doesn’t do that. I will hopefully cover for this March or this year, I’m not holding my own breathe. First opening to follow up 2015 sequel is stick out among this list. The beginning on the song starts with male gospel choir and transitions into Japanese singer angela voice. It’s a unique track to say the least like for Full Metal Panic, angela is constant singer for all songs for this series. Angela least has done few more anime openings and quirky voice to stand out with. This track is a strange addiction and just love it.

Another series to revisit because I want to experience the fun, Gurren gives us. This song has always been a hell of a bop and haven’t been able to get out of my head. It exudes the leaps and bounds Gurren Lagann lays out whenever you watch. Shoko brings the fun through her vocals with a pop emphasis and it’s always a good time with this track. If this doesn’t get you to watch this crazy series then Lita will convince you over drinks.

Looking at my list, I have some interesting choices. Don’t know where my original tastes went somewhere else, haha. Let me know some of your favourite mecha bops, I’m looking for some freshness currently.

Hope you enjoyed this fun start to a Mecha mania March!!

Spread the word, share and check out Scott’s stuff!!!