With my birthday next week, the big 30 next year, this anime didn’t need to remind me some more.

This December I’ve been bitten by the romance bug, watching, reading but that. Thought high time to consume some romance anime and 2017 Recovering Of A MMO Junkie was first up. This year I checked out Wotakoi: Love Is Hard For Otaku, fell for it fast, but massively had to do with my age bracket why the series clung to me so easily. 2019 made me realise how much I’ve embraced my nerdy self in my early 30s and it feels amazing. Recovery Of A MMO Junkie only highlighted this factor me in such a relatable sense being a nerd/neet/whatever in your early 30s. There is just no way for no anime nerd to not relate to this.

Whole series in its entirety is just so STINKING CUTE coming down to the main characters Moriko and Yuta. Two adults who want to escape the high corporate setting and society itself, enter into an online world for peace of mind. People have asked what what I do with my spare time if anime didn’t existed? My eyeballs want to fall out of there sockets. Watching Moriko gather the food essentials to make it fast home for the game is how I feel about the question. My daily dose of anime is non- negotiable. Wouldn’t it be great to drop your job and become a full on neet like Moriko did? if only reality worked that way, Moriko embraced this lifestyle but also came with much insecurity and guilt. Never shy’d away from this fact, the series taking on board an important mental health aspect if someone did what Moriko chose. I loved the series took on inner bleak picture for Moriko’s situation that she’d chosen for lifestyle and not smoke with mirrors case.

Moriko’s insecurity is why I ended up loving her, especially dealing with new social situations that peaked her capacity limit many times. All the social occurrences ended with logical sense for ONCE in an anime, been so long seeing social wrap ups handled how this series did. Essentially addressed even more Moriko’s avatar stating “online is online and reality is reality.”

Moments like that just make you go “YES” and it’s an amazing feeling when a show does unexpected like that. The flip between the MMO and online was balanced perfect for my liking, especially for the level of humour. Scenes Moriko and Yuta freaking out front of their screen over something they said or didn’t mean to were priceless pleasure. 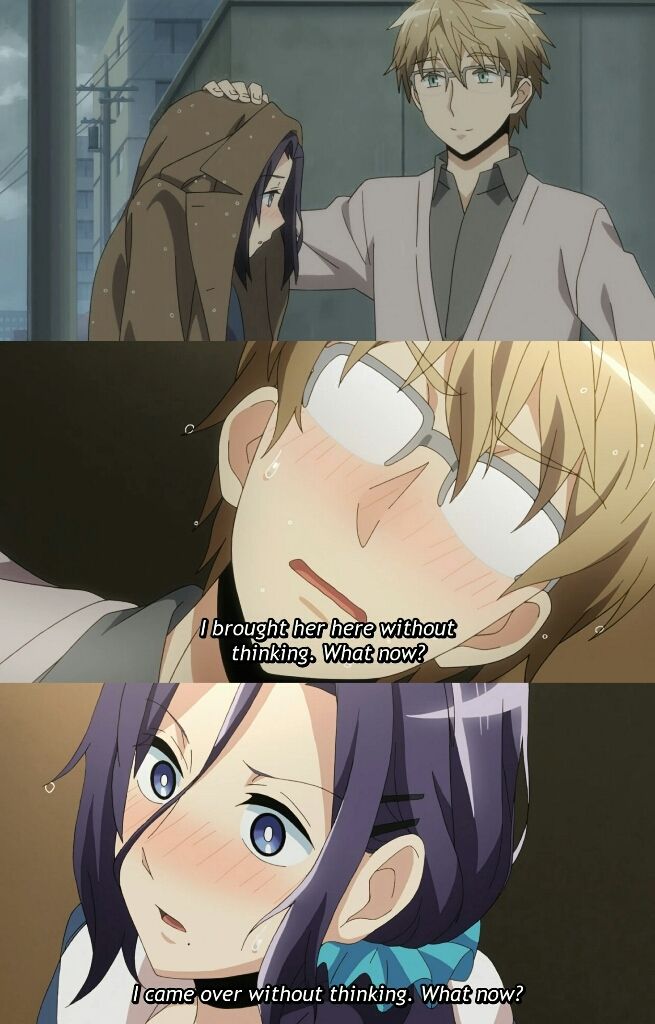 Moriko and Yuta growing infatuation for one another through the game and in real life is so wholesome. Before each other found out they were online friends in past game close to them, hearing how even when game had closed down, they still treasured that friendship. Reminds me of the friendships I’ve made online with many people through social media and blogging. Just as real life relationships are important, to me online are just as the same, one in the same. The idea of connection is completely changing in the way we converse with others and foreseeable future. The sincerity in Moriko and Yuta’s memories of their friendship is beautifully organic to me and an aspect I appreciated a lot to see. Made me chuckle too often especially from either’s anxiety perspective, in any new social setting and million thoughts racing through their minds. For someone who likes to be in their own little bubble.

Biggest step taken was Moriko’s experiencing true acceptance for first time. It is something myself seeks if ever going into a new relationship, I don’t believe I’ve found that feeling I’m looking for yet. You know when it comes all the anxiety you way on yourself will just melt away. You can say “this person accepts all of me” that is what we all seek, the moment Moriko does. Ugh, you just feel happy for the girl. Moriko played by Terry Doty was my favourite performance by her, she nailed Moriko’s awkward manner.

Yuta played by the gorgeous Josh Grelle, what can I say? he was grand always playing such gentleman roles. Next to Zen this my second favourite performance by him. Romance element was very sweet and ending on a touching note, leaving open to a possible season 2 which. . . HEY WE NEED!. Moriko and Yuta are windows into my early 30s soul of how I love being a nerd at my age now. Made me realise we need more anime or our age gap, like Wotakoi having this relation but the margin is small, compared to how many high school stories we have.

This is what I love about anime though, the endless options of creativity still left untapped and makes me more than hopeful for more series targeted to adult audiences. But even if something has a certain target, there are other relations you find anyway sure, Recovery Of An MMO Junkie caters to people in my age bracket. But brings forward themes of mental health and being online. Series like this I can’t put as for a certain group but for everyone. Moriko makes a change to her lifestyle anyone can relate to, anyone taking a change for themselves they’ve been thinking over. Anime caters to different audiences in it’s options but there are always themes amongst you’ll feel the pull of relation and Recovery Of An MMO Junkie is great example.

So wasn’t just for my age bracket I found relation but other things also, other reasons to love or give this series a go. My inner romance me talking here, but as a romance it was cute, My inner neet was touched once more like Wotakoi did. Mainly what tops it is my neet age bracket of course because this was just such CUTTEEEE watch.

Gamers, anime people you’ll all love this so go watch in crunchyroll now has dub as well !!!

Currently I’m watching Plastic Memories so that will be next talk most likely for anime, I’m on a right old romance binge. Also Moriko I feel you nearly 30 and single, it’s even harder now, my god.