Owls post it’s been a bit but this was a hard one to look at from a different angle. Failure has a standard definition to it but I found a loop hole.

One of the best ways we can learn is through failure. This month we will be talking about the failures of our favorite characters in pop culture media and what we can learn from them. We will also reflect on our own mistakes and failures and how those experiences have allowed us to grow as human beings.

Before you continue on you’ll want to check out Lyn’s post.

That looming feeling failure, not passing that exam, not getting that job. We reach for what we set out, it falls from our grasp and we feel like failures. I agree failure is apart of growing and learning as an individual to make us stronger but can we differentiate more on our failures?

There is a stagnate reparation of when we fail in something, we don’t meet that goal or desire, you’re a failure and so is everything else you’ve ever achieved in your life. It’s an automatic putdown to view our successes as failures along with the already failures. All the hard work you put into it, automatically dismissed.

We let everything around us, internet, even friends and family mould our failures and successions. Worst case coming to mind, instagram, pictures of people’s lives looking amazing, holiday in London, or aesthetically capturing photos that get thousands likes. You want those followers and likes, all these popular accounts make you feel failure. That you have to reach for this standard, that doesn’t meet with your values. Then changing your strategy to reach their standard, you feel the need of succession. That need of succession isn’t yours, but the influence of those standards from around you. But? you’ll still fall into the failure pit fall for not sticking to your own values, what sits right with you.

It’s funny thing to think about that how you view failure and succession may not be your own but outer influences. So then how can you define failures and succession for yourself? There are those who can’t, in what they see is an achievement or downfall for themselves.
I remember my first proper job interview for an animal job I really wanted. I made it through the first round but only to be told at second round I didn’t make the cut. Due to there were other candidates with preferred and more experience. So, lack of experience was my only issue everything else I had what they were looking for. But I couldn’t acknowledge what aspects the people said I had but focusing on the one failure of not having enough experience. BAM automatic failure.

Now older and with new viewpoint, it was easily correctable thing to gain experience for the next job I would go for. Looking at this clearer I can define this as not a failure, but a succession for myself. Having the nerve steel gaul to actually attend the interview, answer random questions the employer would throw out and answer them with confidence to an extend – that my practice with interviews was for something. 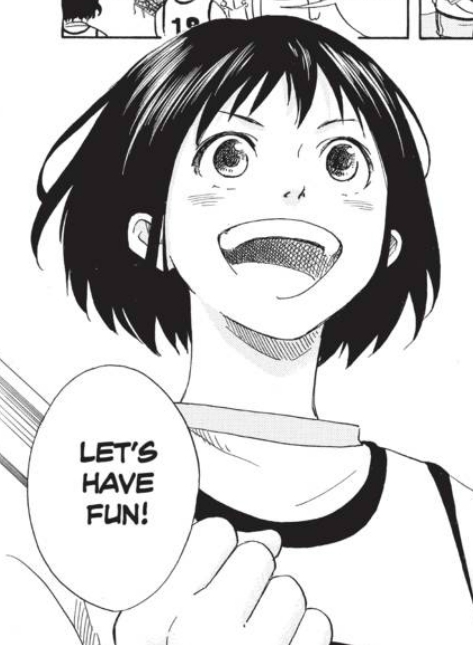 Earlier this year I read a short 5 volume sports series that stole my heart through it’s characters, Cross Manage by KAITO. Focusing on Sakurai after an incident he lost interest in soccer. Sakurai meets clumsy, hopeless Misora who forces him to become manager of girls Lacrosse team, Sakurai has to prove his worth as manager and fix the team as a whole which is a challenge. This series advocates strongly the themes on passion and hard work towards something in every relatable sense but Misora is the story driver of these themes. Misora proves over and over to a doubtful Sakurai, there is every merit in giving your all to something your working towards or passionate about.

The thing I love about Misora character most she acknowledges her core values towards wanting to become good at Lacrosse and win a match with their team. Misora honestly states everything she’s ever tried at hasn’t worked out but Lacrosse has given her a new meaning, drive. To want to get better at the sport. Misora disregards anyone’s negative opinion of what she is working towards because all the while keeping in place her values for Lacrosse and her team.

I speak values here but what does that even mean towards our failures and successions? Values for every different person are never set in stone, there forever changing. To use the term loosely without getting complex here, there are things we believe in, what we like to uphold for ourselves, in the decisions we make. Failure can feel adamant simultaneously if we don’t meet our values, like double bomb shell? not landing your goal then not your values, automatic failure you’ll think to yourself.

Stead of falling into that endless cycle, treating our values as a guide. We’re not going to remain in line within our values in every situation, you’ll step out of your like mindedness if it is required. Having the things we belief in should be treated as a guide not set in concrete, it reminds us of our honest selves that’s always at our core. Misora remained true to herself and passion towards her new love of Lacrosse, only spreading that positive influence to Sakurai. Misora acknowledges her failures but not disregarding them to way side, of not meaning anything.

This tour is about failure but I had to include succession because it’s just as important.. Failure and succession fall into the same group for me, to redefine both in a better sense instead of on singular goal but to focus: on state of our current living. Does it go hand in hand with our values? We can only use our personal values to steer as a guide in failure and succession to better our lives as best as we can. Identifying the small things/obstacles through failures for yourself as successions. I like this redefinition better don’t you agree?

Up next on our tour is Irina who will be talking Natsume as per usual aha. Nah it’ll be a good one as always. Hope you guys enjoyed this short owls version and enjoy rest of the tour!!