If you have never seen around on twitter the whole #thuglita thing, I blame my exaggeration and friend for getting it to the point it has but why not exaggerate even more? Like…. who would Lita have on her own Thug squad. haha I am sure you are mighty curious, you know you want click, heh.

We know Sailor Jupiter would make a amazing thug or gang leader, it’s in her blood people. It’s understandable for only a post like this to exist now. There is a lot to consider picking the right people for the right job as the saying you may have heard. I can assume some of you, myself will be picking individuals like Revy From Black Lagoon, the woman is handy with guns, Lelouch from Code Geass, intelligent mind to have on hand. There are TOO many to choose from and the factor Lita hasn’t watched a lot of series yet, that it’s characters would be great choices.

All Lita would require is a collective group who are like minded and there is a equal balance of brains and brawns. The chosen 5 I’d have on my thug squad are in their own rights badass and possess qualities that are within my preferences. You guys may or may not surprised by my choices. Ultimately would send the message to not cross the Thug Lita Squad.

Ryouta suffered the unfortunate fate being nominated by his own family into a bomb death game for purely doing nothing but being obsessed with a video game. Ryouta is very naive in the beginning, hoping he will be saved. Young, naive and was in denial all the while. Why would Lita want someone like this on her squad? Beneath Ryouta naiveness lies a resilient mind which I’d put my full faith in to rely on. From playing videos for so long, Ryouta built a alternate self, one that is stealthily towards planning and is a quick analyser. Ryouta taps into this side of himself during his survival in bomb hell and it’s impressive.

Ryouta is just a tender sweet boy but it’s that alter ego mind of his that would make a fine asset to my squad. Ryouta would gain more experience in no time, during his time on the island only has made him more resilient and aware of his senses. Ryouta wouldn’t need to be babied for long and transform that adaptable mind of his into something lethal. Cannot forget that bomb knowledge of his would come in handy. 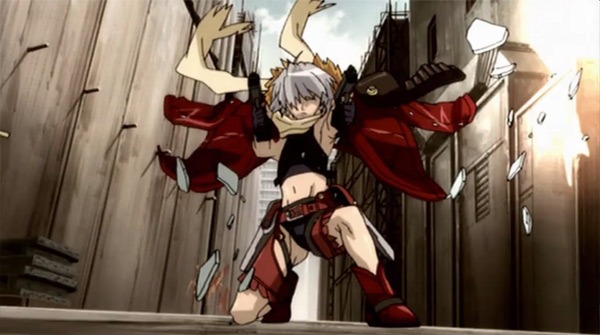 Have you ever met Revy from Black Lagoon doppler ganger? I’d like to think this outlaw gun babe. Burst Angel anime is one I’ve never finished, two tries to reach the end and never did. Shame because it’s a damn entertaining early 2000 series, perhaps a third try might be in need. Though one thing never forget about this series was meek Jo. She’s a woman of not many words, but explodes when her beloved Megan was in danger. Jo is very protective of what’s precious to her, most of the time sends her into a mad rage.

The girl has mad gun skills that you cannot look over and the added bonus of piloting a giant gun mecha. You feel like you’re getting a two for one deal here skilled weapon expert and who pilots a giant mecha. It wouldn’t matter to me if Jo didn’t get along with the others, Jo would only tolerate them. Long as she was making enough dough, that would be a guarantee, she couldn’t turn down. Like Revy though, she’s a individual you wouldn’t want to enrage because Jo is just as scary as Revy. Never wishing to reveal her weakness to no-one unless they get unusually close to her.

Now Lita is a bit wild at heart and only natural you’d want a little bit of crazy in your squad. This squad we are not saints, we’re outlaws. Nicolas would be perfect addition to how I foresee this team happening. Nicolas has the most experience as a hired help taking on jobs nobody else wants too, we like someone who isn’t afraid to get their hands dirty. Nicolas hearing impairment others might see as a defect or weakness, but a weakness Nicolas has harnessed as a great strength for himself. He’d be excellent at sneak attacks along with his heightened senses. He’s a danger alright. Now Nicolas may take a drug that gives him super strength but his sword skills is his best highlight.

Nicolas has a tendinous to loose control if he overdoses on his drug intake, this is where his sword skills get to show off. There’s no stopping Nicolas once he’s in this frenzy state, he doesn’t act like a madman but enjoys the thrill of a fight. Going up against opponents who are more skilled. Nicolas’s experience and sword skills speak for themselves, something I would utilise to the fullest extent. Plus we need eye candy to stare at on the team.

Witchblade is one of my favourite anime of all time, but the fan service and sexualised designs of certain characters wouldn’t make into people’s favourites by a long mile. Masane was dealt a cruel fate being chosen by the Witchblade itself, a self thinking organism who chooses only female wielders. Shortening their hosts live’s, the more power they use. I would find another power source for the Witchblade to feed off of. Witchblade power I wouldn’t want to go to waste. Whenever Masane transforms a overwhelming hunger for destruction takes over her completely, But why would you want someone like this?

Masane’s eventually learns to control the power and she’s the power front I need. At heart Masane is a kind, loving individual and can have a genuine heart to heart with. During the series behind Masane’s intentions was not for herself but for her daughter Riko – so the two could have a better life together. Masane’s big heart tells me she would be a great conrad, you could count on. Much like Nicolas once she’s in her fight mode, there is no stopping her at times but Masane has built up enough self awareness of what’s going on around her. Without loosing sight of what it is she’s meant to be doing. Masane is a strong, resilient woman, who I know could handle herself and be the main squads power front.

Apart from Saito a gorgeous thing to stare at all day, this samurai has skills that can’t be overlooked. Saito may have appeared to be on right side of the law as a police officer. But Saito is a selfish individual and will do whatever it takes reaching his goals. Saito is known as ‘Mad Dog’ back in the day, watching him fight he is like a wolf ready to take a bite. Saito is a advanced thinker like Ryouta but also mad swordsman. Running a squad you don’t want to be dependant on guns solely, hand to hand combat is just as effective. Saito can easily deflective a bullet no problem, with one fast thrust.

Saito like Jo might not be the easiest to work with but let him do what he wishes and he’ll compromise for you. Give and take with individuals like this is how you gain their respect. But Saito has the level of mad skills and judgement I require to complete this wholesome squad.

If you’re going to create your own thug squad, you cannot rely on having individuals specialising in swords, guns only etc. You need diversity, utilises people’s skills to the best of their ability. Not all of my choices, these individuals are bad people, underneath they are softies or have a soft spot, overtop you get the tough selfs. This is exactly what Sailor Jupiter is like in how she fights and is as a person. I wanted individuals who were similar from this perspective, and would connect with her well enough.

Better lock all your doors and windows, next time you hear the thunder storm coming. The Thug Lita Squad won’t be far away either running a muck, saving someone or having a fight because someone ticked them off for the wrong reasons. We’re not saints or heroes, just thugs with our own place in this world.

I do hope you all enjoyed this post and let Lita know down below. Who you would have on your squad and why?

I’ll see you all in the next thug post!!