Surprise Collaboration !! Remember I wrote that pretty cool list of my 5 favourite non Gundam pilots. Gundam is a tender matter to tackle and I called upon my good mecha buddy Scott to collaborate on this matter.

Happy Sunday !! if it’s not Sunday for you then remember I live in the future of Australia. Finally there was time for me to actually get out this belated collaboration put together, me and and Scott were pretty sporadic for how long we took on this. This Gundam collaboration I knew Scott would be psyched for this collaboration, it’s about mecha . . . and GUNDAM. Collaborations I love readers being able to see both angle points from females and males, particularly for this genre mecha. It’s always an interesting dynamic, as I only know 3 other female bloggers who like Gundam. It’s a loner place of females who like mecha, as the demographic is targeted towards male audiences more.

Me and Scott had to dwindle down our list to only picking 3 Gundam three pilots each . . . which was hard. I’ve only seen about eight Gundam series so far, might have been twice as hard if I had seen more by now. For this list we did not basis our picks on how well these pilots can fight on battlefield only. For the values these pilots hold close to them and their journey through the series. So time to ask who are our current favourite Gundam pilots? The mecha fanatics me and Scott are, it might change in the foreseeable future. 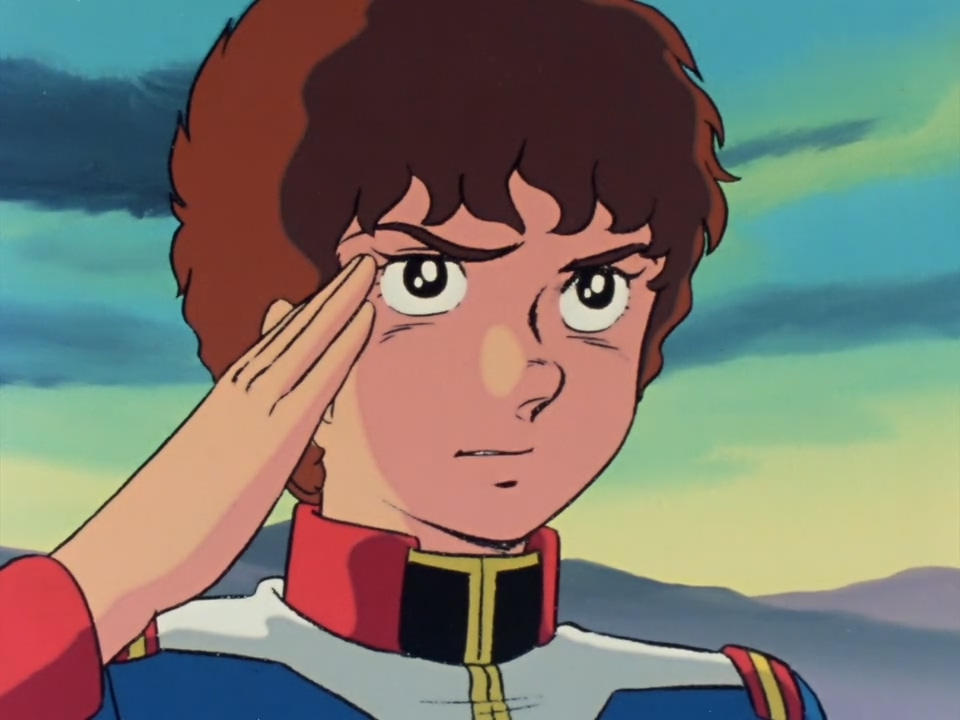 Amuro Ray is not only the first Gundam pilot that ever existed, he is the quintessential Gundam pilot. He also probably influenced a lot of mech pilots for years to come. Not what this post is about, but it’s at least worth at least talking about. At the beginning of Gundam 0079, Amuro Ray was only a nerd with some natural talent in piloting the Gundam. Joining the crew of the ship called the White Base because he had no choice, he continually was forced into fighting the Zeonic menace because he was forced to. While he did break down in the middle of the series, Amuro matured and found his own reasons to continue fighting. Those reasons being fighting for his friends and destroying the Zabi family.  He became the ultimate Gundam bad ass.

The most interesting part of Amuro’s life is what happened after the original series. Most shows don’t show protagonists after their time in the light is done, but the Universal Century does. Zeta gundam showed that he was still skilled, but was also a bit of a women’s man which was an interesting way for him to go, but he was also a partial mentor to Kamille Biden, Zeta’s protagonist. He still had his own confidence issues to get through because he was under house arrest for seven years for just existing. Fighting against his own confidence and teaching Kamille something was how he spent his short amount of screen time.

Char’s Counter Attack was where he truly became my favorite pilot. That’s when he fully matured into his own and had unbreakable will of iron. His complete understanding on how human kind should live, how he would stop at nothing to stop Char’s plans, and how fully mature Amuro Ray has become since being an angsty 16 year old are on full display in this film. Amuro Ray has been my role model for years and I just feel like I know him more then most anime protagonists that have ever existed in the history of anime.

Turn A Gundam is about the conflict between the advanced people of the Moon and the Victorian Era people of the Earth. What the show needed was a person in between those worlds as a protagonist in between those worlds and this show found that with Loran Cehack. He is a boy born and raised on the moon, but spent enough time on the Earth to fall in love with it and it’s people. Piloting the Turn A Gundam, he fights for the Earth because they would have no chance otherwise, but constantly talks to the other citizens of the moon to find some sort of balance between them. It’s a little sad that never happens, but Loran trying is worthy of note here and should be talked about.

The way Loran Cehack acts is how a pacifist protagonist should act. Whenever he is about to get into a conflict, he asks tries to ask for peace first. If communication between Loran and the enemy break down, that’s the moment where he proceeds to kick ass. Unlike other Gundam protagonists that don’t understand pacifism at all. You know, the Gundam protagonists that are hypocrites and just use their supposed pacifism as a justification to blast people away with laser fire all over the place first and then ask questions later. Loran is a great guy and very mentally strong. The kind of person that you want to have piloting the most powerful robot ever. I can see why he gets the affection from Queen Diana and some others. 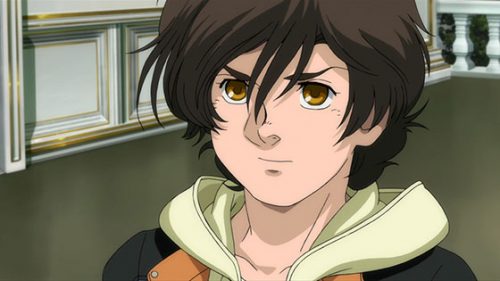 Banagher is easier to explain because he’s like a combination of all both of these characters. He’s the ace pilot that carries around Amuro Ray’s legend after his passing and also is the guy in between trying to find an endpoint to this new Neo Zeon war that Banagher finds himself being apart of. He’s a seemingly normal and kind hearted person with a mysterious past and power to connect to people in ways they didn’t expect. I cover a lot more things about Banagher in my OWLS post I wrote last year, so please give it a look at to learn more about him and why he means a lot to me.

Of course, you were going to see Seed here as it’s my current favourite Gundam so far. Kira and Athrun have always been hard to choose between, both good souls with their own set of justice. Deep down inside, Athrun was the better contender, having more personality than Kira, and needed more guidance than Athrun. Apart from the fact Athrun is a superb pilot, I could watch him fly a Gundam all day it’s not the main reason he’s a favourite. Athrun had a natural aura that is likeable, genuine and full of pride not in arrogant way and stronger sense of justice than Kira. Athrun is very self inefficient and likes to get the job done, which is his best trait – on top of being a sweet underneath his military mask.

Athrun is half lost during Seed losing his mother among millions during ‘Bloody Valentine’ attack committed by the earth alliance. Athrun’s father becomes swallowed up in revenge against the earth alliance, in turn Athrun becomes consumed by. On top of this it puts a strain on his friendship with Kira, being on the earth alliance side, constantly the two are fighting every encounter. This leads to Athrun becoming confused in the right path to take for himself and it takes him a long time to figure out. It’s a long process, frustrating at times but once he finds it, he doesn’t let go. I built up newfound admiration for Athrun. Coming to terms with everything that had transpired for him and turning that fear into a fuel fire driving force. I’ll take a Athrun any day of the week, Cagalli don’t think you’ll be needing your bodyguard every again 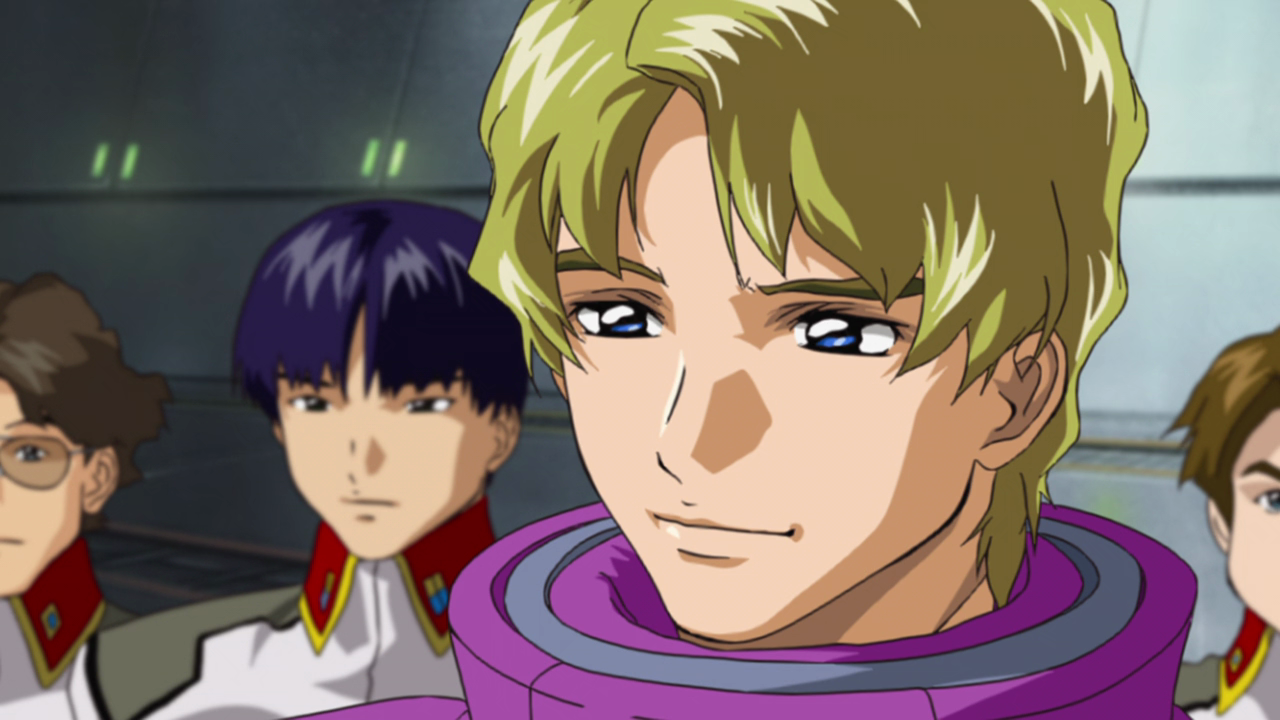 This choice might come as a surprise but this pilot doesn’t get the mention he deserves I think. Lieutenant Mu La Flaga joins earth alliance famous battleship “Archangel’. Mu was a such a fun character for Seed, with the surprise of adding a interesting dynamic to the plot itself – which you won’t see coming. Mu has a playful nature and is a member favourite among the female crew members. But, Mu is not an individual you should judge so early on, much like Athrun. Mu has a strong belief in justice and to do the right thing but shows it through in a joke like manner, humorous trait about his character.

Mu is quite the strategist during battle and thinking ahead of the game, stealthy addition the Archangel received. Mu looks out for Kira a lot which is really cute, becoming a beacon guide for Kira whenever he feels lost. Mu is one of the first people aboard the Archangel to accept Kira, as is in the series main plot centre is the war between Coordinators and neutrals. Coordinators are altered human with more capabilities than your average human but Kira grew up on earth and easy to see why he is on the earth alliance side. Mu is a fun guy, most of the time carefree but serious when given the situation.

Gundam 00 is a phenomenal world building Gundam series that astounded me last year, deserving all the praise. Series ability to make you feel emotionally connected to it’s main four Gundam pilots was amazing, backstory coverage was grippingly epic, for their purpose in joining organisation celestial being in the hope of eradicating war. The attachment was strong with every pilot, choosing is hard but Setsuna is on top, Lock on is next in line, Lock on you’ll be in another fun list I have planned, promise.

Setsuna will remind you a lot of Mikazuki from Iron-Blood Orphans, knows how to put on a gundam fight show with few words. Setsuna we can label as completely introverted but has more going for than Mikazuki. Setsuna has a sad background growing up as a brainwashed child soldier, murderer from left to right. It built up a strong conviction overtime wishing to bring peace to the world. Growing up in a rural war setting, that came with some religious beliefs adding to Setsuna’s thinking into his teens. Setsuna was a character I wasn’t expecting to advance terms of his character. Realising the ideals of Celestial Being go beyond what he can comprehend and through every experience with this group. The bigger picture is set up, of what the world is really like.

Setsuna never shows much emotion but opens up slowly adding more likeable factor towards his character, without this element – he would be boring. From his comrades and war, political encounters softens up Setsuna, at this point I began to take a liking to him more. By the final conclusion, Setsuna turned into a badass, it was satisfying watching him finally reaching the conclusion he wanted for himself but ultimately, what he wanted for the world. Setsuna fighting. . . magic people to watch, he’s got the skills man.

Me and Scott hope you enjoyed our Gundam collaboration which was long overdue for me to get up. Definitely go check out Scotty’s blog where you can find more mecha talk over there. Here’s to more mecha talk for the future and I’m sorry Lockon choosing between you and Setsuna was hard you know. . .

Tell us who are your favourite 3 Gundam pilots if you had to choose and why?