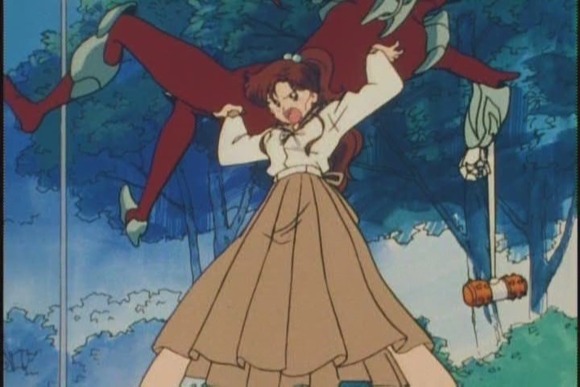 Writing at a computer you cannot dub as exercise for your hands and wrists, lies. The blogger lifestyle is a creative path but leads to a lazy attitude to get your blogger butt moving off their chair you sit in for hours.

Past week I took the time to work on other hobby stuff and reading catch up hence no posts. Hope for those that have this easter weekend off spend it well, mine is being spent reading, starting up popular series I’ve avoided for years and movies – see how much I squeeze in. I wanted to write a useful or at least helpful post for other bloggers who find the task of leaving your chair, like it’s the end of the world. Leading the life of a anime fan laziness becomes your new best friend. We are all constantly guilty of. I understand my blogger friends. It’s a cruel task stepping outside and moving your body, bare the thing called sunlight. If you’re a blogger who does takes public transport, walks everywhere that counts as bonus points.

In my book every exercise counts no matter cycling, walking, up until 2 years ago the meer thought exercise of it never excited me:

In that time to now exercise, I LOVE IT, thrive for it on a daily basis. My biggest achievements gaining more flexibility and losing 10 kgs since the beginning of last August, currently aiming to lose 10 kgs more. I’m very proud in how what I’ve achieved but finding the ‘motivation’ to get my ass down to the gym or do a home workout, was a struggle (still is at times, haha). But thus for the purpose of this post you NEED KILLER beats to get you through workouts. Personally for me every session I’m always aiming to smash it out specially if I do a 1 1/2 hour session at the gym. Lita goes hardcore every time.

What’s the best music to get a blogger through gym sessions?

Lita wanted to share what anime beats get through her thug smash sessions. In the hope might give someone else new tunes to add to their gym playlist. Help you get through the toughest parts in your workouts. This is personal taste talking here.

Gangsta was one of the very first seasonal anime back in 2015 and sad Manglobe went bankrupt. This kick-ass action filled series never got it’s second season, the potential of greatness has not been fully tapped into. Despite this sad fact number one reason, this series cannot be forgotten is the bop opening. Stereo Dive Foundation use an unique group of sounds for this opening. What gives this opening it’s sharp edge with it’s mix of urban, hip hop and trance. It’s just a sick beat that all the motivator!!

The Rising Of The Shield Hero (Rise) MADKID

The Rising Of The Shield Hero is my most recent anime obsession, my love for this series words cannot describe. It’s just badass in so many aspects. Now this series opening theme might not be most epic sounding as some on this list. MADKID young Japanese boy band making a comeback singing the first opening and second also. I love this 5 member group’s variety in voices especially the rap elements, to why the song has grown on me so much. Along with the guitar melody in the background, a song that gets me excited every time.

Instrumentals have equal impact as a song with words. I’ve harped on about my eternal love for Free! OST music, all of them I need to own. The variety of sound elements used in every track is so versatile and different. Urban, hip hop during the races to subtle, visually stunning aquatic visuals, I LOVE IT SO MUCH!!. I have a few tracks from Free! OST on my workout playlist but Powerful from Clear Blue Notes album, is a killer beat. I wish it was longer, gets put on repeat quite often.

A Certain Scientific Railgun (Only My Railgun) fripSide

Sad to report I’ve only seen first half of this series, a long time ago. Hope to complete in the future but from my first viewing. The opening just stuck, all this time and another electrifying beat to get your pumping. fripSide have been around since I got into anime and love their pop/trance style. Whether a hard hitting or soft song these guys for me nail it every time. Main girl vocalist has a really pretty voice.

Banana Fish I put on hold last year must complete it this month or next, get it over and done with it. I wasn’t ready for it to end so pause button. Out of this entire list this is would be my constant repeater during my gym sessions. Ripping, gut wrench song about loss and anguish that makes me think of Ash every time. This is up their with Renegade for me, it’s just so good, a must for your playlist. Whenever I’ve felt like pushing but the motivation ain’t coming, this track is first pick to get me through. Especially during boxing rounds, ahh man it’s a thrill.

Jubei The Ninja Girl I’ve spoken about before little gem in anime not many have heard of. One of my favourite gems in anime I’ve found and the OST is just something beautiful to listen to. A historical, ninja theme was just addicting to me, I cant even explain why I love this remix main theme version so much. Use of violins and classic/trance sounds unique and cool to me. A strange song I consider that motivates me, we all have songs like this.

Now now Man With A Mission who did the first opening Raise Your Flag is a great gym choice. Where my preference lies because all the opening and ending themes to Iron-Blooded Orphans are beyond good. Third opening is my favourite out of all and gets my adrenaline going when it plays. Main male vocalist and his raspy voice, how he sings the lyrics with such aggression, I was sold.

Waiting for this to be released on 24 April the WAIT IS KILLING ME. I’VE SETTLED FOR  youtube track on repeat for the past 2 weeks. . . no more. Fairy Gone P.A Works latest new work and I’ve been liking it so far very intriguing series. Opening theme took me by surprise how much I fell for it within seconds of listening to it. K)NoW_NAME  is a band I’ll be paying attention to now because this song is rockingly badass. I love the rap and female vocalist long range in her voice along with the rock medley. This song has brought new refreshment to my workouts recently. I NEED THE WHOLE TRACK NOW!!

Full Metal Panic Invisible Victory (Even If) By Tamaru Yamada

Full Metal Panic won’t ever seem to die on this blog with season four last year, it only feels worse haha. What I love about this Full Metal Panic opening is the song never lets up for a minute and during one section, is a cracking electric guitar solo. Next to the Fumoffu opening this is my second favourite from the Franchise. Tamaura has a gorgeous voice for this and could listen to her all day. It’s a bonus for me it’s Full Metal Panic because I never expected the opening or ending themes to be such addictive songs.

This is a opening theme I’ve loved for 8 years and still running strong. T.M Revolution I’ve loved for that same length of time, this band love for their pop trance like fripSIDE. The insane beat in this song gets me going every time, especially that electric guitar. In the past I wasn’t a trance lover of music but Japanese musicians have changed my perspective, now I’m just a addict. As the song saids, I feel my motivation reignite when I feel I can’t push anymore.

Just ten beats that I listen to on a daily basis during my tense gym sessions. I’m not someone who likes to go light in the gym, sometimes. Feel free to pick at my strange taste of anime songs that get me going but something you can do in return. By sharing down below what songs you listen to while walking to work? or when you do your daily exercise.

Just maybe I’ll add it to my playlist if you’re lucky enough.

Anime or Kpop music is not only what I mainly listen to. Symphonic metal music is another favourite alongside this.

Hope this fun post helped you guys in someway to update your playlist !! I’d like to do more of these exercise/health anime posts, no clue how I’d go about doing this but another idea for me.