First of my Mecha March reviews is coming out now. Among the four I chose to watch, there had to be unknown choice. Military series Schwarzesmarken had the essence in it’s name already. An unknown gem with a cold tale to tell.


Set in 1983 during the cold war, for years earth has been fighting the alien invaders the “Beta’. In the midst Germany has become divided between the west and east sides. Story centres East Germany 666th TSF squadron, special team who specialise in fighting the laser class beta. This ruthless team will follow orders as higher priority than saving human lives at the start. The beta is not the only enemy this squadron has to face, no-one trusts no-one. When rookie pilot Kaita Waldheim joins the team, attracting the attention of the enemy.

Schwarzesmarken is a spin-off series from the visual novel Muv-Luv franchise. A light novel adaptation, which is the next sister sequel previous to Muv-Luv Alternative: Total Eclipse spin off sequel. Both series set in a alternate universe.

Schwarzesmarken german blizzard setting is fitting for how grimly cold and callous this series demonstrates to be. You’d think the BETA alien invaders would take focal point but this isn’t the only enemy that both sides of Germany have to worry about. Both factions of west and east are at war among themselves, the sheer persecution towards one another, comes before the great threat of the BETA.

The series heavily influenced from the real 1946 cold war, taking a huge place in our history culture, to ever be forgotten – Reciprocated in Schwarzesmarken as a strong reminder. Due to the series German heavy influence, nothing is held back from cruel reality during the icon WWI and II. It’s something I came to appreciate about this military gem, not shying away from what real reality transpired – through the brutality of abuse and torture. For twelve episodes intertwining the conflict between east and west, on top of the BETA invasion, the plot fell short at points. Reaching reconciliation between both parties was handled well but the BETA part wished had more expansion time. Showing how united parties pushed back the BETA, that would have made for more satisfaction. I’m talking already the handling of reconciliation at the start because makes it much easier for me to talk about the tension build up to this moment.

The journey of reconciliation is a bloody confronting and tragic. Out of west and east germany, the west was always the most hostile. East Germany half the time was barely hanging on by a thread. It’s takes a single individual to shine a torch of hope, where it’s already nearly too late through all the secrets, blackmail, abuse. Schwarzesmarken highlights the cold and calculated nature of humanity during the time of war. No-one is clean but everyone has their own sins and dirtied hands. 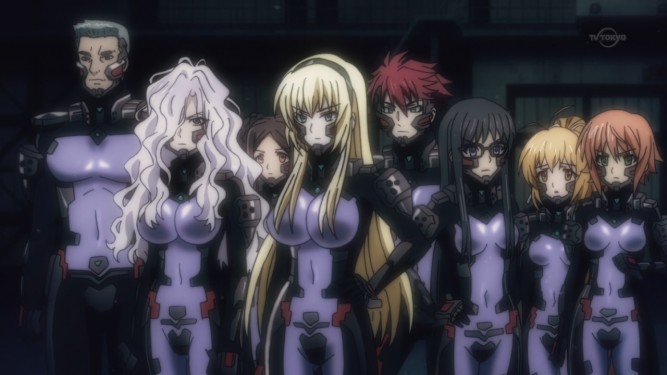 I didn’t think I’d come to care about East Germany 666th TFS squadron strongly as I do. In skills as a unit this team is inseparable but as a working group was at point zero at the start – with each member out for themselves with their own selfish goals and intentions. Trust was non existence among everyone, only following risky orders made for top priority. Saving humans lives and doing rescue missions wasn’t within their priorities. Their Captain Irisdina Bernhard, strong, badass women who kept this team going even when she was under suspicions from the Stasi for killing her brother. Irisdina believed in every single member of her squadron, inspiring her comrades to do the impossible. Centring during the course of the series Irisdina, Theodor and Katia who become the core drive for wanting a united Germany.

The focus on Theodor I ended loving in the end going from a lone wolf neither caring for his team or what he was fighting for. Theodar is a damaged record already and to being given newfound belief by Irisdina and Kaita. Theodar grows into a individual with new purpose and his repressed kind side was able to shine through. Irisdina and Kaita own strong individuals for wishing both sides to come together and fight the BETA – was inspiring and endearing. Why inspiring when they probably got their hands dirty? which they do in order to make come true their own ideology of a united German nation.

Painstaking battles, losses and realisations this squadron goes through only by the end makes this unit a solid one. Emotions are running constantly high for this squadron, you become attached before you know it, each members past scars and sins. It’s hard-hitting for this squadron as secret plots and betrayals lie in wait for them. Stasi East Germany secret police will call them, are the bringer of the central turmoil.

A constant twisting plot that never takes a breather, let’s lay on some freakish designed aliens and tense military battles into the mix. Schwarzesmarken was not boring for one second, SOMETHING was always going to spring upon you each episode. Those BETA aliens just had me freaked the whole watch through. CGI animation works in favour for the aliens, looking beautiful gruesome and disgusting things, weird. Speaking on animation for second here which was done by Studio Liden Films. You may know for doing Love And Lies and that badminton series Hanebado – which many people say it was killer animation done there.

Schwarzesmarken came out in 2016 but the animation holds up so strongly for today, everything was beautifully detailed especially the TSF mechas (Tatical Surface Fighters). The mechas themselves were very cool but it was the battles where the excitement was at. The battles are bloody, violent time, it’s just get worse throughout, I warned you here, haha. But to compensate watching the 666th squadron working their tactical magic as a unit, doing the impossible compared to other teams is a rush.

The OST to this series must indefinitely gets a mention because it rocks out military epic. For a grim series as Schwarzesmarken use of heavy rock, electric trance and operatic backing brings forth such a drawing mass presence throughout the series. It reminded me of Attack On Titan music a lot. Alongside having gorgeous opening and ending themes. The opening ‘White Force’ sung by Fripside a Japanese Duo whom have done the opening for Magical Index ‘Only My Railgun’. Sing a catchy soft tune, and ending theme sung by Zahre is just so subtle and gentle, blissful track to listen too.

Schwarzesmarken is most definitely not for the faint hearted. Singing a tragic song of the harshness of war, countless suffering and losses in order to reach any kind of peace. Pity this series was so short, being long I believe would have made it to be a even more cracking ride. Alone for twelve episodes it leaves a hard hitting impact that you’re not expecting. Doesn’t start out strong but gradually gets better. The high body count-age, messed up crazies, tight fighting suits are the series downfalls I should say. But everything that goes on just topples these factors I believe. Never hindering the series significant impact. For how the series ended was as fitting as you can imagine for a anime centred on war.

I’m not going to sit here and lie to you that things don’t become crazy, wrongful or messed up. Yeh, they do but this isn’t a warm tale you’d tell by the fireplace to your children. It’s about a country on the brink of becoming frozen, forgotten where as Captain Irisdina quotes in the last episode “Noone Can Snuff Out The Last Light”. Ah, it’s a fine quote from a badass woman who is a new female favourite for me. I cried too at so many points during the series, it’s BLOODY TRAGIC YA KNOW.

Schwarzesmarken was a military refresh. If you’re a mecha/military genre lover and read for some hardcore war then this series is for you! I didn’t expect to be so touched by this military gem sitting on Crunchyroll that anybody would look over instantly.

Schwarzesmarken a series that did it’s job brutally in making me never forgetting this military trophy among the genre. Feels so good to cover a unheard of series on the blog again and hope to continue this whenever I come across one in the unknown trove of anime.

Does this slap in the face military series peak your interest? Had you heard of this series before? Leave any comments down below !!

As for my other three mecha march series Space Battleship Yamato and G Gundam, their are special plans in the works for these. Which might not be out till May we shall see and Zega Pain I put on hold because I wasn’t feeling it. I’ll come back to it when I feel up to it again. Hope you guys enjoyed my coverage on Schwarzesmarken, this post took me 4 hours. . . Ugh I don’t know why >.<

If you can find this series on Crunchyroll!!