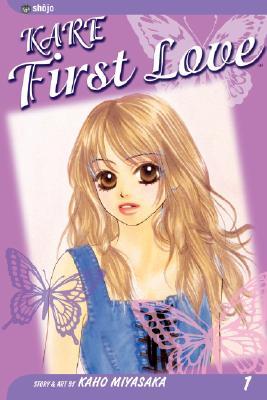 We all have our firsts and it felt a good time to talk about a special manga that sent me down the wonderful, torture road of shoujo.

Can’t believe in all my blogging time I’ve not written about this series yet. Real shame on me over here. February has sparked a-new flame towards my love of the romance genre. Over the weekend I participated in my first readathon where for 24 hours I read nothing but romance related manga, it was so much fun. During this time it made me think about the main reason I’m the shoujo freak of during today because of one manga.

Kare’s First Love for over the last decade has been my favourite shoujo manga to date, I’ve reread this title over twenty times and a read that makes me feel wholesome every time. Going back sixteen to seventeen was one of the best periods of my life discovering the true wonders anime had to offer. My friend introduced me to Kare First Love, after reading it the first time, every time after that I was asking to borrow each time.

Highschooler Karin is your typical study bookworm, with forced expectations from her parents, Karin doesn’t know what fun is anymore. Before getting off the bus one day, Karin drops her book she was reading, when a boy Kiriya approaches her. Accidentally lifting up her skirt, attempting to return her book. Karin thinks he is a straight up pervert, whacks him one then runs off. Kiriya tries to give Karin her book back but Yuka Karin’s supposed friend makes Karin go on a date with Kiriya and his friends. It’s from this point Kiriya begins to show interest in Karin and Karin’s about to learn the meaning of fun.

Firsts will always be special no matter what for you. Kare’s First Love even now to me is like the perfect shoujo package to me. From my first read that was the first reason to hit me why I’d fallen in love so much with this manga. The series covered all the basis in a romance story I wanted, a introvert girl who has no clue about how to deal with boys, next minute is noticed by one and goes through a transformation. A transformation through female protagonist Karin that related on a personal note for me. Karin exactly reminded me of how awkward in high school it was for me, especially around boys. In knowing how should you interact with them but like Karin you just want to blend into the background.

Karin doesn’t start out as a appealing protagonist, these cookie cutter shoujo females never do. But the new-found confidence Karin found from dating Kiriya and new experiences for me shaped her into a determined girl by the end. Karin was lucky to have Kiriya he was a good boyfriend throughout, someone I’d date hehe. Kare’s First Love is a shoujo that is great for first timers, because like for me Karin’s character is relatable in every sense for young females. Someone who is socially awkward with boys, someone who is afraid of taking that next step in a relationship.

Taking your relationship up to the next level was another trait in Karin I related closely with. Sex to me in my teens found nothing but disgusting for the longest time, the struggle Kiriya and Karin face reaching that next climax spoke to me. Karin’s awkwardness and fear towards sex projected exactly how if I was in her situation, would be exactly the same. It takes Karin a long time to come around, taking a great deal of patience from Kiriya. The build up to the moment finally ends in such sweetness between the pair. I loved the treatment of adolescence from the female perspective represented through Karin’s character. How it is for introverted girls who have low self esteem around boys, the fears that come with your first time.

Kiriya and Karins relationship is quite the drama ride. One minute things are travelling nice but another catastrophe comes along, all so melodramatic. All the usual shoujo troupes exist added to the mix but least nothing leaves you feeling bored for a second. The constant drama doesn’t leave the plot to have a breather period of peace, which would have been nice. This is would be my only critique over this manga because everything else I love. Despite the relationship drama Kiriya and Karin together are adorable, discovering the ins and outs of one another. Kiriya and Karin have a similar problem in lack of self esteem, unlike being for Karin it’s socially, for Kiriya pursuing his goals and defying is family. Kiriya’s a rich boy which brings for some soap drama that turns ridiculous at points.

By the end Karin and Kiriya’s self esteem massively takes a leap by the final volumes, the pair becoming a more strong assertive couple. Which adds too a more sweeter satisfaction regarding the ending. Karin and Kiriya will annoy you from their constant mistakes the pair make during their growing relationship, even now still gripes me, haha. Ah, but all the anguish it ever brought me was in a good way, how invested and happy I wanted the pair to be in the end.

Karin’s First Love is the perfect shoujo package to me, has all the shoujo anks that know how to flutter the fan girl heart. Focusing on the first discoveries for an introvert to the world of dating and new experiences, it’s the right appeal for younger female readers. This reliability you become attached too as it was like for me during my first read with this manga. Takes you on a shoujo ride that fills every void you look for in a shoujo story just to feel that satisfaction. There has never been since Karin’s First Love that can give me the whole package of ten volume satisfaction like this series does for me.

I want to go re-read this now so badly. Every time I think about this series, all the reading cravings take over. It was nice to get to finally talk about a special manga for me, a whole satisfaction package. My love for it has not wavered even after ten years but I feel shameful for it not being apart of my collection yet.

Tell me cherry please what is a special manga that got you into a particular genre?  share me your feels right here, I WOULD LOVE TO KNOW !!