We’re going back to 2012 for this old anime coverage. Over Christmas I managed only one rewatch and don’t ask me, I was feeling some otome goodness.


Upon returning childhood home to visit her Grandma, Tamaki has a run in with some angry supernatural spirits. Only to be saved by a handsome Takuma. It’s only then Tamaki finds out she is the Tamayori Princess, that’s apart of her family history. Tamaki must awaken the powers within her in order to seal away, a demon sword the Onikirimaru. Before befalling the world into chaos, to aid her, Tamaki has five guardians including Takuma who are sworn to protect her and together fend off enemy Logos.
Hiiro No Kakera is a series I’ve had this love/hate relationship with from the first time watching. During my re-watch my original feelings towards this series have not changed sadly and yet it’s one I’ll still happily re-watch no matter what. It’s also frustrating when you have a series favourite like this, you know the problems it has, but you get sucked into it anyway. Hiiro No Kakera is based off the 2002 Visual Novel, so don’t ask me about the game have no idea. 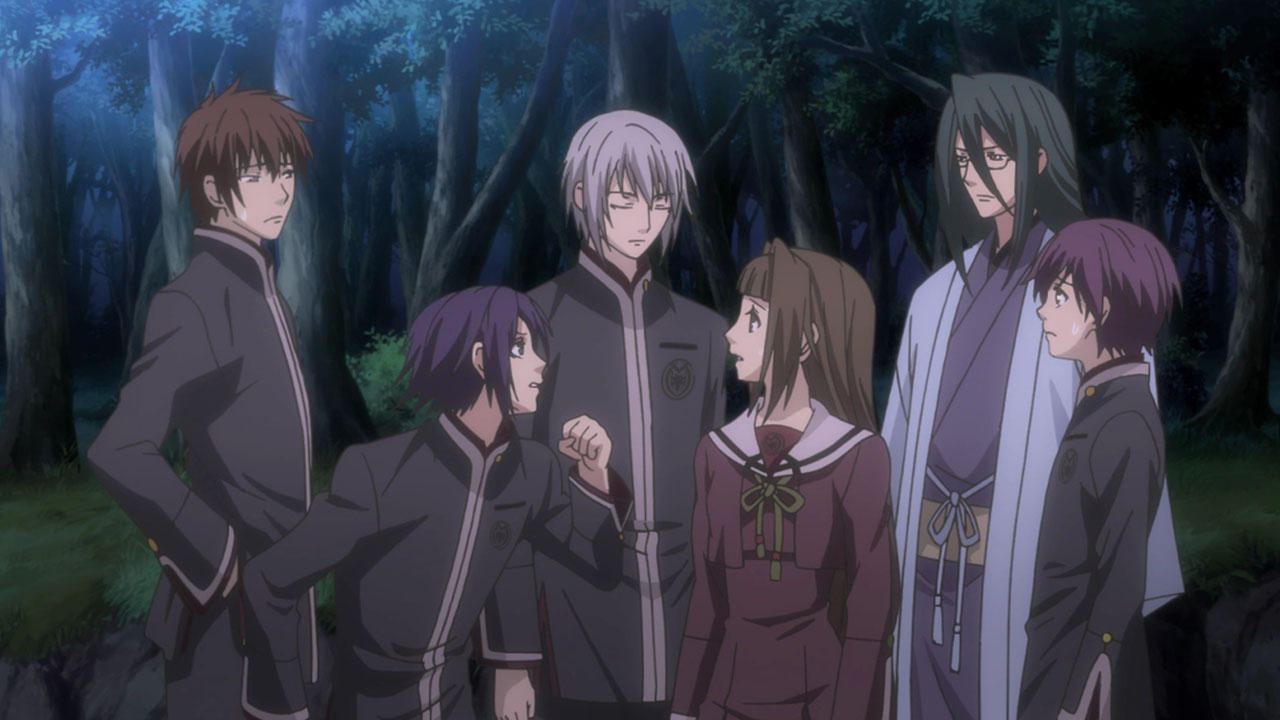 I remember the first time watching the first season and obsessed I was. At the time the second season hadn’t come out, me and my friend were holding on by a thread. I’ve never bought a series so fast, the moment it was released. Dying to know the conclusion, it was the quickest dash home and bingeing the whole thing in one sitting. Ah man, thinking about it now it was such a good binge at the time, Ultimately made me prefer the second season over the first, with very good reason.

This is where I’ll come into my love/hate relationship with Hiiro No Kakera. The first season is a slow walk in the park, it’s practically a snore fest at times. The whole plot scenario, Tamaki and the guardians fend off Logos to getting the demon sword, it was a dance around. All the confrontations between the Logos and others, friction between Tamaki’s relationship with the boys, all happened in the same radius. Centring within the village, not going off into a supernatural world like Kamisama Kiss or Noragami. Things got boring at times, you’re waiting for that excitement kick from the series, you’re not going to get it.

First season is a snore fest but the second season made up for that. Where things pick up from there and become more interesting. In regards to the mysterious behind the Tamayori Princess and sword Onikirimaru. Adding on a better note this series has a satisfying romance element which was a complete surprise to me, bingeing second season for the first time. Learning a major flaw with some anime otome adaptations of there being no boy chosen by the main girl at the end. If you’re a seeker of these type of endings Hiiro No Kakera has got you covered. It’s actually a really sweet the build up towards the romance element so you won’t be disappointed. 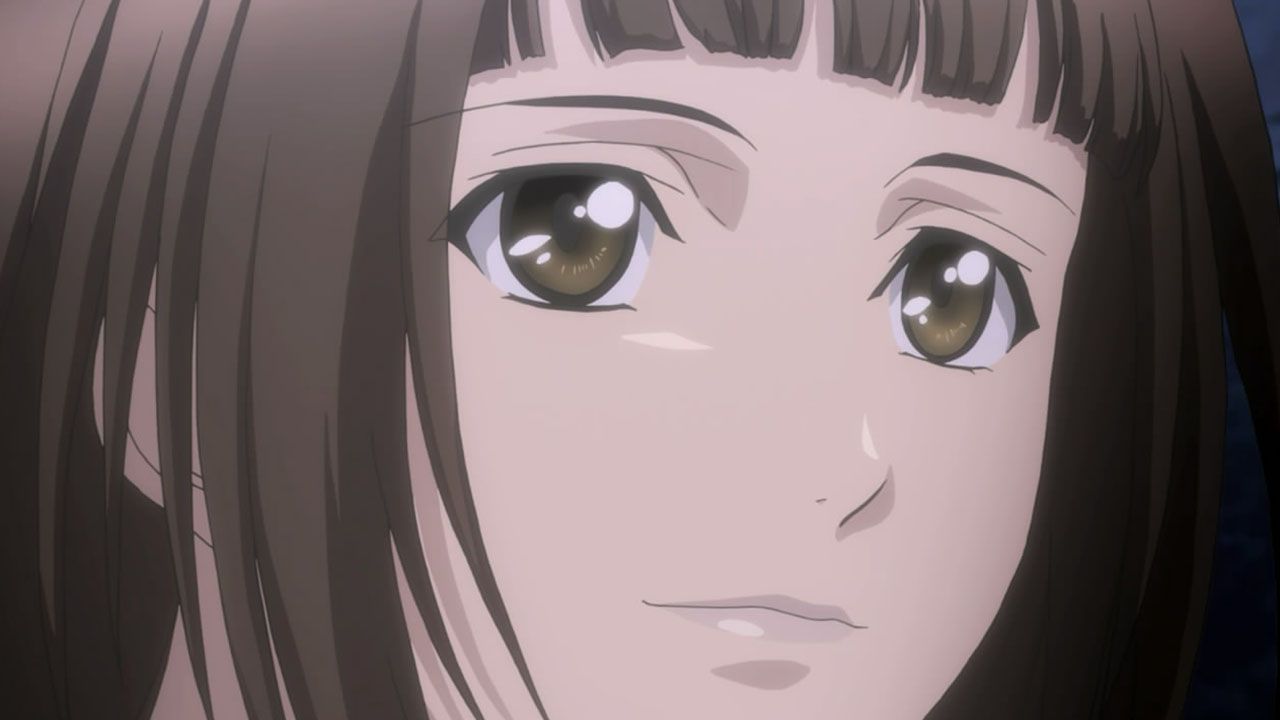 In all the Otome adaptations I’ve watched so far the female protagonists are the same. Weak, naive, no root to their personality, Tamaki at the beginning was all these things. The first season Tamaki was practically useless, trying to awaken her powers took forever and in every battle with Logos. The guardians were saving Tamaki 24/7 while she stood there, unable to do anything, becoming a burden. At the end of the first season actually began to feel sorry for Tamaki a bit, her Grandma was nothing but cold toward her. Only wanting Tamaki to awaken her powers and become the Tamayori Princess, not spend time with her grand daughter.

Tamaki was thrown in the deep end but instead of doing nothing about it, the girl wanted to find some resolve. Find out exactly what she was suppose to do as the Tamayori Princess? Her true purpose?. Tamaki even made the guys question their part as guardians in all of this, up until the end of first season. The boys had never questioned Tamaki’s Grandmothers orders and followed every order. It would have gone bad if everyone just kept coasting along not questioning nothing, following the old hag’s orders.

Going into season two is where Tamaki began to shape into a more likeable protagonist and by the end forming into a half decent protagonist. It just took sometime to get there, far as the hot guardians were concerned they were all likeable enough. I did like the bond Tamaki built up towards the boys, it was rocky to start off with but the boys warmed up to Tamaki. In wanting to protect her genuinely not just because she was the Tamayori Princess and it was the guardians job to do so. Tamaki gave the boys different reason to their existence, to which they had never questioned until meeting Tamaki.

The enemy Logos, whole time Tamaki and the guardians are fighting. The so-called villains are such a joke. Four of them following a blonde look-a-like doll to get the demon sword is a complete borefest. Hardly characters you’ll remember, makes me confused as to why put such a group together. Their the most disorientated group of villains I’ve see in anime so far, no depth to their personalities. It’s like somebody went “Oh this group will do” bringing nothing interesting to the storyline itself. You learn nothing about the Logos organisation itself on top of everything. So why should I care about these characters and why should you? so villains are a disappointment.

Now you’ll realise my love/hate with Hiiro No Kakera the slow beat it drums away too in the first season. But the second season I love. Despite all I’ve addressed over the series it’s still a good otome adaptation to me, hence how many times I’ve re-watched the thing. With the exception of the boring villains, all the characters are likeable, Hot guardians get bonus points, haha. Tamaki the protagonist takes a bit to warm up to. But Tamaki turns out to be a forthright decent protagonist in the end, I liked her. Otome you want romance and Hiiro No Kakera covers that satisfyingly, I’m proud to say.

To highlight on a better note the music to Hiiro No Kakera is gorgeous. The coverage of music particularly in season two highlights the deeper story behind the Tamayori Princess. In a few scenes during season two the music becomes full of sorrow and guilt, it’s beautiful. The use of music throughout is elegant and subtle.

Hiiro No Kakera as a anime otome adaptation is better than that trash Amnesia. Good god yes, if you did not enjoy that hot mess. I encourage you to give this otome a try, going over all the series good and bad. Nothing could be worse than Amnesia. Regardless Hiiro No Kakera is a series I’ll come back to rewatching, though the love/hate relationship I have with this otome.

Ah man feels so good to be talking some old anime again, 2012 it’s still classed old. I hardly ever hear anyone talking about this otome these days. Hope you guys enjoyed this old read and look forward to more during the course of this year,  not just January.

Leave a comment of who was your favourite hottie guardian? and your thoughts to this otome adaptation? Was it better than amnesia?