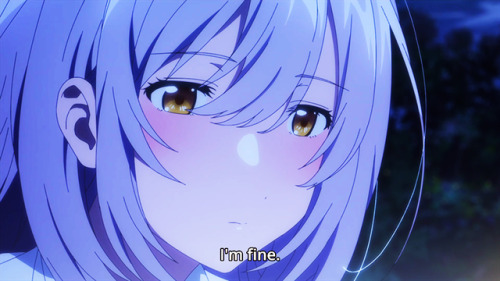 Hang tight the old anime content is a coming starting this week. But there is something I’ve wanted to get off my chest and the connection with P.A Works latest newest work – that was the most convenient of timing.

Iroduku: The World In Colours is the most visually appealing to the eye series, this Fall Anime season. I’ve been following along with this series and it’s been a soothing joy for me watch each week at the moment. Now if we know P.A Works by now, they are known for they’re emotional ripping tides that crash against you, feeling all the personal connections. Iroduku is no different, main protagonist Hitomi since a young age has lack of colour sense. Hitomi’s whole world has been nothing but grey but suddenly her grandma sends Hitomi 60 years in the past. Nothing like being thrown in the deep end right off the bat.

It’s was predictable to me at the beginning, Hitomi is a character you’re going to feel sorry for – it’s a given. Clear from the beginning, the transformation Hitomi will embark on from a grey world, to one full of wonder and colour. We’re at the half way point in the series and last few episodes hit gorgeously hard. From the moment choosing to watch this series, was automatic how this series would impact me, that’s predictable haha.

Give Up On The Disconnect

Without this series visually, magical animation, the impact in feeling towards Hitomi’s character wouldn’t be twice as impactful. The animation was the grandest representation to express Hitomi’s disconnect from the world around her. A feeling of constant numbness, someone had just given up. The first episode sets up a bleak atmosphere Hitomi finds herself surrounded in and by the end, most magical scene happens. Burst of colours take over the screen, as Hitomi stares in astonishment of colours whirling everywhere – due to Yuta’s drawings for some reason. You know that the girl was going to see colours but the meaning to Hitomi, expressed over her face. Ahh, it’s stunning.

From this point, other magical encounters keep edging her to be positive more slowly at this moment. Hitomi’s changing world last few episodes, couldn’t help make me think about different communities and groups on a personal level. Recently in my attempt to try and reconnect with this group of girls, I’ve know for a few years. We all had a common hobby, we loved to share and do together. I considered these girls friends but after constant commenting in our private facebook group, it hit me. The inclusion I wanted to feel, wasn’t there, no matter how much putting myself out there.

None of the girls ever treated me badly, they are good people. It felt lost feeling included in this group again, why try so hard where realising they’re just acquaintances? The disconnection with this group of girls was lost long ago. Honestly was kidding myself even trying to attempt trying to connect, least you try right? Only suck thing out of this realisation I had, tad alone in this particular hobby but new people I’ve met this year – are cool and supportive of it, they give me much encouragement to keep doing this hobby.

Everything in my life currently is good and full of such colour and goodness. But while it may be, they’ll be many times you’ll feel it become grey and bleak for no reason. Just like with my attempt to connect with this group of girls. Hitomi’s disconnection all this time for her is understandable, being full of jealously and envy. The other girl members talking about things that I wanted to feel included in but knew the conversation would fizzle out – go nowhere. Hitomi removed herself from any inclusion from others of her own free will, I chose to remove myself from this group in the end. It was for the better even I felt sad over it a bit but knowing there were groups being apart of, that never left me feeling disconnected.

Hitomi’s world has already changed a lot, though thrown in the deep end is not the best way to go about it. Hitomi still is lost on a few things but slowly feeling reconnection with what’s around her, it’s a journey of rediscovery. It’s not a lost to me now the disconnection from group of girls, if you even give it a try to reconnect with others and it fails, then there won’t be regrets. Because you tried and that’s good enough. Disconnections with people are either worth it or not on a personal choice level and with every new colour brush strike Hitomi makes, closer to gaining what she’s lost. Hitomi’s character reminded me that the loss of disconnections is not always a bad thing. Not to let grey, dark times overthrow the colour that’s in my life, in what’s good.

If you haven’t checked out the magical Iroduku; The World In Colours god forbid you’re missing out on a rainbow of sunshine to watch every week. This anime has given me life each week and magical factor.

It’s been sometime, writing a personal piece and feels good too. Also gave me an excuse to talk about Iroduku The World In Colours. BEAUTIFUL SERIES. P.A Works I’m a sucker for.

Thanks to anyone that reads this and next post from here on out is old anime focused.