The warmer weather is beginning to creep in and this fall anime some blossoming series that have surprised me yet again. Time to talk another two series that I’m keeping up with for certain.

Anybody else who has been watching Gridman, has been getting Gurren Lagaan vibes? I certainly have over here, as it was impossible to resit checking out Studio Trigger’s newest work. Just from looking at the visual art, it was obvious this would be an over-the-top series. Studio Trigger I’ve found in discussion with people is not well-loved studio for some strange reason. Darling in the Franx was the first series, I’ve watched by this studio, Kill La La, Kiznaiver are on my list. Darling in the Franx I’ve yet to finish, but it was popular for how up and down the series got.

Diving into Gridman, truly got a feel for Triggers style which I love. Trigger has a whacky, quirky approach towards their shows, standing out from the crowd. Gridman based from the live action Ultra-man starts off as not you’d expect, Yuta waking up with amnesia forgetting who he is. Next moment a gigantic reptile thing known as a Kaju is destroying the city, Yuta’s classmats Rikka and Sho become involved in the craziness. Yuta getting sucked into an old computer at Rikka’s shop, turning into Gridman, that had been calling out to Yuta.

Things start off very strange in the first episode, feels slow at first but by the end it got good. Gridman battling the Kaju was over-the-top goodness, very entertaining. Second and third episode things get weirder, random Samurai guy in a black suit appears top aid Yuta and the others, along with three more in black suits. We have a crazy girl, classmate of Yuta who seems to hate the world and takes her anger out on it with the Kaju. Going from not sure at the start now to digging this series was quite the transition. It’s off-putting their is no direction of where the plot is going, which will be a turn off for people.

Gridman astonishes me for the fact how casually the characters make no big deal out of the city being attacked. People have been forgotten or died. A scene Rikka and Sho think Yuta is dead, and four guys in black suits show up. Their reactions to this is lack luster, more like shrug your shoulders and this isn’t strange at all. This was hilarious how casual the characters reactions are to the strange goings-on. It’s just hilarious to me and I’m not saying this is a bad thing. Let’s count this point about the series a humorous addition.

Gridman is choppy and all over the place right now but it’s this non direction which keeps me wanting to watch. The battles are hell entertaining, over-the-top and brings a burst of excitement in the episodes. During the episodes things become very slow and still, so it’s good the battles are there. The characters for me right now are all stationary, noone stands out but for some reason I adore Rikka. To answer why? honestly can’t she’s just cool. Watching Gridman has made me keen to see Triggers other series, because this studio’s whacky approach is fascinating. 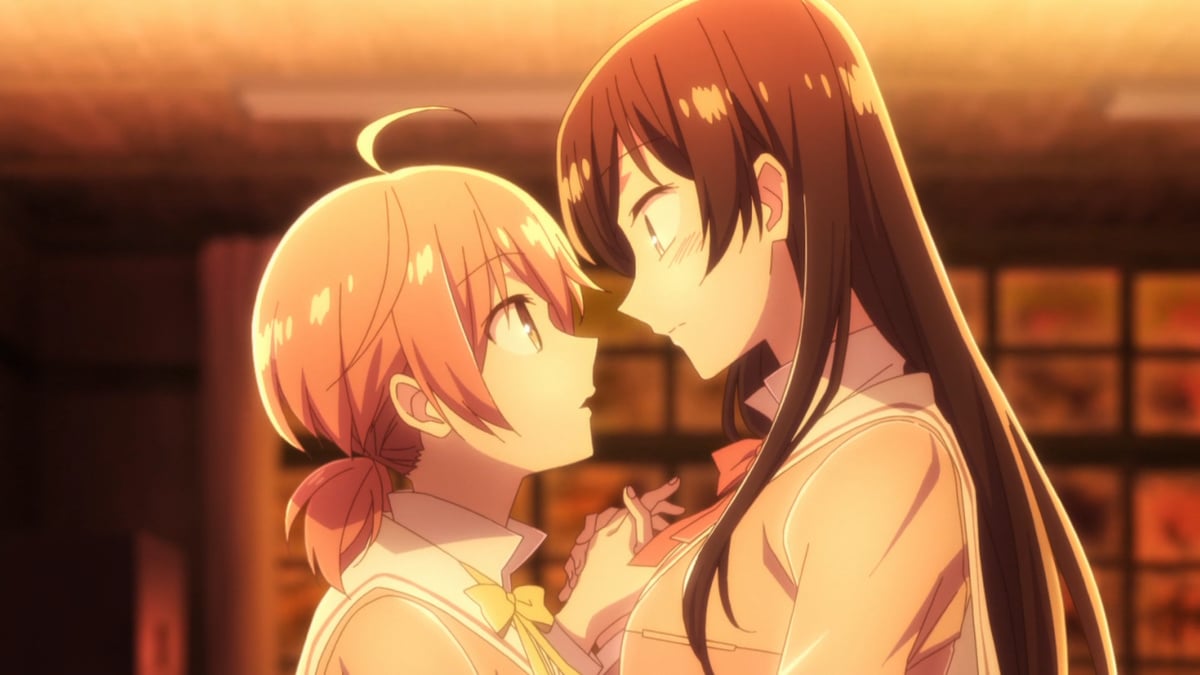 2018 is the year for yuri comeback. We had Citrus, step sister complex which I still need to write my thoughts about here. While there were aspects of Citrus I enjoyed it didn’t reach a point in yuri, that my desperate need to see. A true validation between two girls feelings for one another, and their relationship. No pulling the usual troupes of rape assault, forcing yourself upon another. I know I’m not in my desperation to see validation in a girls relationship as it’s hard to pull away what we already know how other yuri series are.

But… since hearing about Blooming Into You getting an anime, gave us some small hope. Don’t know about you but first two episodes just made me so damn happy to watch. We’re following Koito who is a shoujo junkie, living for all those idealistic confessions. Suddenly is confessed to by student council president Nanami, in the potential Nanami could fall in love with Koito. First thing couldn’t believe when watching, their was no toxic invasion of malicious persuasion, either girl forcing themselves onto another.

All that was established and stood out was the genuine connection Koito and Nanami had that either had never experienced that ‘special feeling’. Neither knowing what it’s like to fall in love, a fantastic grounding to start these girls off on. It’s precious to watch and beyond raw in this new experience the girls are going through, most innocent way possible. Koito and Nanami are both cute in their curiousness and as main leads, very likeable. Nanami was the main one that surprised me being the oldest, I was waiting for her to pounce on Koito, do a 180 personality change. That underneath, Nanami was manipulative but… oh my god no. I remember sitting their during my watch in astonishment, is this HAPPENING!?!

Nanami was respectful towards Koito unsureness toward Nanami’s unexpected confession. Sure, there was a surprising kiss in episode one but in no way do you feel it was forced, intentional. But, genuine feelings and meaning was meant in Nanami’s confession. Blooming Into You, you are answer to my long pray and I’m enjoying every second of you.

Tad late this second round of fall impressions but Gridman and Bloom Into You are certainly ones I’ll be continuing. Bloom Into You is the runner favourite for me right now. I don’t really need to say why.

Please do let me know if you’re following these fall shows and what you think about them?

I will see you all in the next post!! which won’t be over a week like this time around.