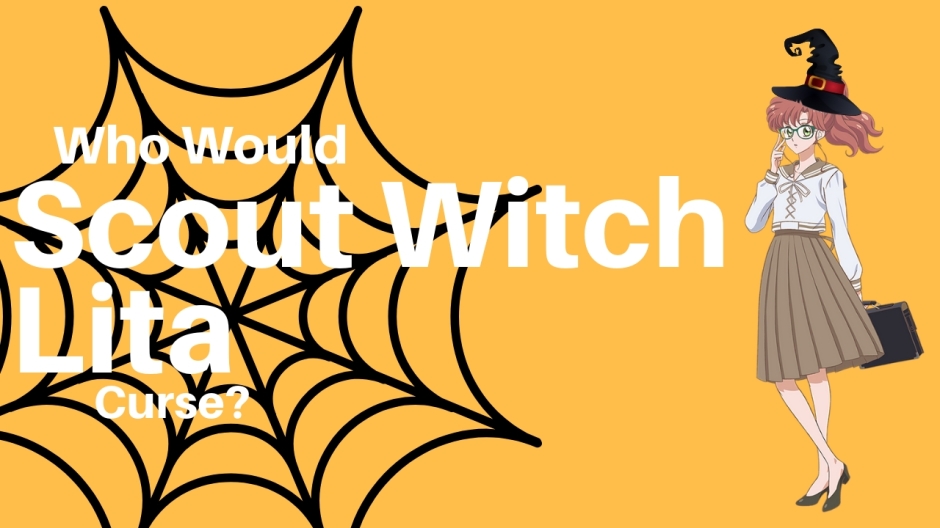 The spooky bug bit me good as I hadn’t planned on writing any Halloween related content for this month. Personally blame my blogger friends and participating in the Inktober challenge.

The cauldron is boiling nicely, at the ready to work some curse magic.

Feeling the evil yet guys?

Believe me in when saying had not planned any spooky, supernatural etc content. But the spooky bug has bit me and had a realisation, this is a grand opportunity. To finally watch particular anime series and read titles that I’ve been meaning to forever. Say goodbye to your usual Lita and your new host will be Scout Witch Of Jupiter. *WARNING* Content could get very dark, haha. Doesn’t that have a ring to it your new host, I love it.

Now, curses are a cursed fate aren’t they? and we all have characters in anime that make our blood boil.

I’ll be naming a few anime characters whom have either committed shallow deceptions or who have just rubbed me the wrong way. Haha, let’s see who are my lucky victims while the cauldron is brewing.

This piece of trash has appeared a post long time ago as useless character to me. Takayuki is a lucky individual getting a second mention, only time you get a a gold star. Romance, drama

Any romance fan will become enwrapped in fury of Takayuki’s back and forth yoyo game between friends Mitsuki and Haraku. Takayuki starts dating shy Haraku, when he finally pays attention, her actually exisiting. Soon after Haraku is in a car accident which puts her in a coma. Mitsuki, best friend has always harboured feelings for Takayuki, the girl takes full advantage of a broken Takayuki.

The thing that mostly flips me off about Takayuki is he is just SOO WEAK AND INDECISIVE. Incompetent to say what he thinks and just goes along with people. Constantly running away from his problems, Mitsuki was an escape goat. Takayuki is not the type of the guy I’d ever date.

Now.. the fun part what kind of curse?

Hehe, the fun thing about curses whether said verbal, require a ritual so many different kinds. It is all about your will and desires of what curse you wish for. In regard to Takayuki:

Takayuki Curse: May no female never find him attractive again.

There goes his sex life, haha. Everybody hates a cheater, Mitsuki is just as bad in this case but Takayuki was worse out of the pair.

There are so many scenes in anime that have twisted my stomach.

Your all going to hate me bringing up this one.

For those have watched Full Metal Alchemist, that one scene which got turned into a meme. Piece of human low life possible, Sho tucker experimented on his own wife then his daughter Nina and even their DOG. In order to make Sho’s great aspiration of a fully Human Chimera, with the ability to speak english language – new hybrid. The scene Edward finds out what Sho had done, I cried and my stomach felt twisted. It’s impossible not to feel like that when your watching this scene.

I’ve heard many people say the guy deserves to die. I’m speaking curse wise here, course he gets the worst of the worst. The kind of curses that are longly drawn out for eternity

Sho Tuckers Curse: Sent to his own personal hell, reliving hearing over and over of his victims screams including especially his own family. Turn up on extra high pitch.

This one had to be in this list. no questions asked on this one.

Arrogant people can be the worse to deal with, Leonard (Tessa’s Brother) from Full Metal Panic. As to why he deserves a curse purely for his snidely attitude to getting anything he wants – in five seconds. Making his first appearance in Full Metal Panic Second Raid, as  leader of Amalgam’s group, Mithril’s enemy. Leonard got possessive over Kaname as she encounters him in Second Raid, due to knowing she’s one of the whispered – meanwhile forcing a kiss upon her. That scene still leaves me boiling thinking about it now.

In Invisible Victory his arrogance escalates when Leonard kidnaps Kaname. The guy is always the same, ultimately in the right, one step ahead. Leonard’s type of character are thousands like him in anime, but the presumption everything will fall into place. Leonards way of thinking just makes your teeth grit so hard, which I think the guy deserves a curse.

Leonards Curse: That I would wish nothing but everything goes wrong in all his plans and schemes

The lesser evil curse because all Leonard as going for him is Arrogance which is break. heh.

*Reminder this post is all for fun, haha only think I mean is my dislike for the these characters*

Do hope you all enjoyed this spooky post, I’ll possibly do a part two. Definitely comment below which character in anime would you put a curse upon?, and what would it be? I’m keen to know muahh!!

I’ll see you all in the next spooky post!!

4 thoughts on “Who Scout Witch Lita Would Put A Curse On?”