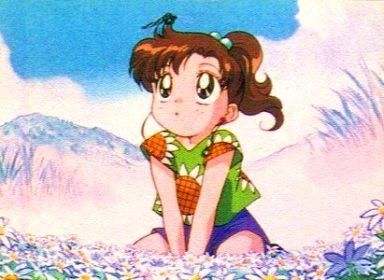 Month ago I did a podcast with fellow aussie blog Steph, it was a blast. I had a major trip of nostalgia during the cast and wanted to share, fond memories as a child with anime.

It’s a shame there’s only the odd glimpse of Makoto as a kid, she is so cute.

Anyone who grew up with anime full well knew, never referring to it as ‘anime’. Instead ‘cartoons’ which is what I thought watching in my younger years. These times we all might give to go back to, because were simpler before the internet/social media took over many children’s lives. Warped there minds, the reasons like me turned into introvert shut ins, haha true no?

It’s clear enough through my blog, youtube outlet how crazy I’m for anime. A wild Lita between 10 to 14 knew what she might evolve into, as I am now. Which is honestly true fact, I knew I wouldn’t be an average girl – least that turned to be so. Referring myself to the terms ‘geek, ‘nerd’ at a young age, resonated with me perfectly – the thing I felt that defined me. I never had a care in the world what others thought of me, best time in my life 9 to 14 year old me. Where being absorbed in my own whacky bubble of cartoon fun.

Feel free to check out the podcast I did with Steph from Two Happy Cats, reliving parts of our nostalgia.

Toonami was the golden the days, this should be engraved somewhere. Ten year old me is when my love of robots and mecha began, entering into a classic as Gundam Wing like for many. I remembering watching it late at night, staying up to 10pm myself considered being a true rebel. Toonami channel could only ever watch on main lounge TV, that was rare so ended up seeing the odd episode. I had no clue what was going on in the series back then, the aerial battles between the robots were what first attracted me to watching the show.

Pilot Heero didn’t take long for me to become obsessed with because back then, series like Dragonball Z, Sonic X I had a male crush – on someone. Maybe I had a crush on Sonic… sensing judgement on me already. Yeh.. I have a million male anime crushes that still burning a passionate flame even now. The moment being taken in by Herro was a famous scene everyone knows, telling Relena he will kill her. Young me witnessing a scene like this and laughing, looking back on it now – oh dear….

I really think if it had not been for Gundam Wing no way, would mecha be my favourite second genre. It seems I enjoyed shows that gave me adrenaline rush, Gundam or robot related series do that for me.

Dragonball Z AM and PM

Dragonball Z was a huge part of my childhood, it was mornings before school and after dinner at night – this show had me. It would air on Toonami 6am, always got up to catch the episode. Sometimes there would be two episodes playing, I’d sit through both – then get yelled at being late for school. I was always still in my Pyjamas, haha. Honestly don’t know what it was that made me attracted to this series, still can remember watching the very first episode ever. At the time thought it was so weird, these people summoning beams out of nowhere – but it suckered me in. Honestly thought it was magical can remembering thinking ahaha.

It was an extra treat for playing more Dragonball Z late at night. Most of the time I’d be begging my parents to let me watch it, always taking over the lounge TV. One point my sister and dad got in on Dragonball Z, – my dad would stand there in the door way of the lounge room. Watching it with me, he never sat down always standing in curiosity. Even now he will still mention about Dragonball Z making such funny remarks “What’s the name of Golden Boy”?. Dad would always say Goku’s name wrong, I’ll still burst out laughing now. Secretly always thought he found the show cool, and maybe he still does.

One stupid thing use to always do whenever Goku would use his Kamehameha. I’d do the stance and scream in time with Goku top of my lungs, when about to attack. Then after would come parent yelling haha. One fond moment I remember belting my lungs at was when Goku finally turned Super Saiyan. My hate for Freiza then ran deep, just wanted him dead, after killing Krillian. The moment Goku started kicking his ass, man couldn’t wipe the smile off my face. This moment from that episode became a favourite and still is. Vegeta I hated as much as Freiza back then but low and behold, now Vegeta is a favourite. Go figure, there are a few reasons to not like Vegeta foul temper, selfish but hearing his tale of woe as prince saiyan. It moved me and now think he’s a hot piece of ass, so bad boys always win with me.

Among all the cartoons I watched, Dragonball Z was my main haven for escaping, things around me I wanted to ignore. Let me go to crazy place on a daily basis.

It’s funny above Dragonball Z, Sailor Moon and Gundam Wing the biggest anime love in my childhood was a show about spinning tops. Now… when I say I was obsessed with Beyblade, literally mean it. The first two seasons of Beyblade never gripped me, not saying never enjoyed them. The third season G revolution was special where my true obsession began with Beyblade as to why this season? Loved all the characters were more grown up and matured. *cough* Honestly…. let’s be real was because of Kai Hiwatari, though this has nothing to do with being my first anime crush. I’d fallen in love with how bad-ass he’d become in G revolution, by the end of the series finally decided to grow up, haha.

How can a show about spinning tops leave me obsessed? Celestial spirits are inside. Which at the time thought was the coolest thing. The main group involving, Kai, Tyson, Max, Daichi, Kenny, Hilary and Ray there passion for the sport was what I loved most about the show. Watching Beyblade every Saturday was a common ritual, though sometime I’d miss an episode. So nobody here has forgotten what a VHS tape is, whenever knowing I’d miss an episode, I’d record on this one tape. Who knew one tape would become a sacred treasure, any chance I got. I’d be rewatching the same episodes over and over. My parents found it hilarious my demand for a million blank VHS tapes. I built quite the collection but my first Beyblade tape was always special

The obsession never stopped here, discovering a site called fan fiction was a big mistake. I was on that site every day, reading Beyblade fan fiction became another before bed ritual. Don’t think reading so much fiction of one series would have lead me to read different ones. Fanfics about Kai gave me life, especially romance ones, he and Hilary became a favourite shipping. Invested in reading so much Beyblade fan fiction I wrote my own fan fiction called it “The Legendary Blader”. Whenever staying over my Nan’s place I’d spend hours working on this one story, over 80 pages long from memory.

Know something else? I still have the same fanfic even now. and? The story was about me and Kai. My fan-girl heart was full-filled when completing the story.

Just like with Dragonball z screaming out Kamehameha, whenever that damn Beyblade opening theme came on. I’d be ‘letting it rip’ the entire opening theme, pretending had my own Beyblade – dancing around my room like an idiot. Ah, some of my grandest memories to always look back on, even after all this time. The love for Beyblade is strong as ever and found my Beyblade twin aussie blogger Steph.

An anime classic which will never die out is Sailor Moon. Everybody knows it. It was said when getting to watching Sailor Moon, seeing the odd episode like with Gundam Wing. Sailor Moon primarily would air on Cartoon Network and I only ever remembering reaching up to the battle for queen beryl. After that Sailor Moon was taken off the TV and never getting to see the whole series a decade later.

It seems in what I watched, Gundam Wing, Beyblade and Dragonballz felt was watching what boys would watch. Growing up was never a girly girl, I was somewhere in between. I resonated with Sailor Moon like other young fans, but truly became fully invested due to an episode “Jupiter Comes Thundering In”

If you’re new to my blog I’m a hardcore Sailor Jupiter fangirl, named my blog and youtube channel after her. That’s how deep the love runs people, those who have been around here for a long while. They’ve heard it all before. I’m thankful for Sailor Moon introducing me to my favourite female character ever, that represents parts of me and one personally look up to as well. Many fans of Sailor Moon, I’m one among many whom the series will be forever special to me.

Well I’m sure you all would have learned a thing or two about child Lita, she was crazy, screamed and danced to every opening theme, finally had a thing for bad-ass male characters. No wonder I got issues now when it comes to anime. This post was purely for your amusement… let’s be real when don’t I embarrass myself. Also it felt amazing to take a trip down memory lane.

Myself would love it in the comments section, you guys share some fond anime memories you have as a child. You all get a baked cake for sharing your stories, some reward I’ll come up with. I think it’s hilarious in how people got into anime and their stories from as kids, so let’s have a laugh here.

I hope you all enjoyed this nostalgia post and it’s October. Where the hell has time flown, well lots of fun content planned for this month so be on the look out!!