For the longest time, I’ve been looking to recommend a mech series to non fans of the genre. That is not heavily complex terms of plot, isn’t all solely fighting and not all sad. Finally…. I have found it.!!

In a sci-fi setting Mars an ocean covered planet, it’s main source of survival the export of water. Martian economy has taken a downfall, as the expenses go up. Growing up in the slums, main protagonist Gram, has tried to make ends meat for him and friends. After loosing their jobs, a common thug puts a deal for good money, Gram refuses but his friend Bon takes on the job. Not knowing the earth forces would be involved Gram runs into the famous pirate group “Ship Of Aurora”. Becoming intertwined and joining the crew on a pursuit of a rare treasure.

It’s been frustrating for the longest time, finding a robot series. To recommend to non – mech fans, that isn’t all about being serious. The same old, oppositions fighting a war and through the power of mech robots, will bring them victory. Expanding more on this general idea but making it fun. Happy to report of finding such series, finally. Mars Daybreak was the breakthrough I’d been in search of. Studio Bones past mech series such as Eureka Seven, Star Driver, Rahxephon, are ones I’ve enjoyed for their own qualities. Star Driver is the closest comparison to Mars Daybreak, having a over-the-top appeal with it’s characters and crazy vibe. Sadly Star Driver has a plot can cause confusion at points but this is where Mars Daybreak, becomes the stand-out star.

Why Is Mars Daybreak A Break Through From Heavy Detail Mecha Plot, That People Find A Headache Wrapping Their Heads Around?

Within the first couple episodes it was a demonstrated, straight forward plot set up to follow. A laid back guy Gram who becomes involved with famous pirate ship of Aurora – go in search of, God of stones. Whats simpler to follow than bunch of pirates going after treasure?. Everything else almost becomes irrelevant, not saying the mecha fights aren’t cool or interesting mars setting. Mars Daybreak doesn’t come with the complexity as say Gundam plots do, the series brings relief – to the word complex. It offers a crazy, run ride with romance and adventure. I would definitely put Gurren Lagaan and Mars Daybreak in the same category. 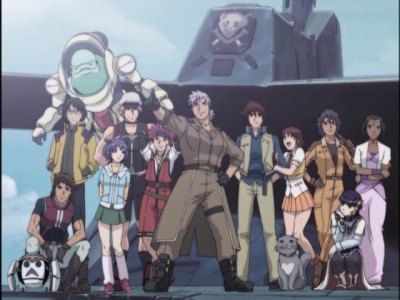 I’ve yet to venture into the world of One Piece, which I’ve avoided for a long time – those long running series, haha. One Piece is the ultimate experience of a pirates life but Mars Daybreak appealing set up, reeled me easy. Regardless of what was going on in this series, the ship of Aurora had my 100% attention. Why? because of the crazy crew and demonstrating the meaning pirates are risk takers.

All of the crew members are a unique, comedic bunch. Talking cat, dolphin in a space suit, alien girl, tomboy captain – president’s daughter all such likeable characters. Honestly not one I don’t love because their team chemistry, is hysterical. My personal favourites are the captain, who is the central point of the team’s risk-taking plans. Also main protagonist Gram, whose laid back nature about literally everything. A guy who takes nothing seriously is the funniest thing, making such a fun protagonist for Mars Daybreak.

Saying before ship of aurora’s cast had my focus the entire watch. There crazy scenarios they found themselves in, while pursuing the treasure. The search for this treasure is nothing to be taken seriously, fact that counts for the whole series. That’s the best thing about Mars Daybreak, serious tone is almost non – applicable, all about being ridiculous and fun. I say almost because unexpectedly a romance between protagonist Gram and his old friend Vess, the pair go through the motions. Mostly Vess whom starts out as a solider from earth forces, later on gets a taste of the pirate life. The romance element works out rather satisfyingly, which was a nice surprise.

Mars Daybreak was truly a surprising gem to come upon. Incredibly entertaining and hysterical, keeping that momentum all the way through. For the first time regarding a mecha series, I didn’t really care about mecha’s . What…? No.. haven’t gone crazy, all the fight scenes were great and mech design of ‘Round Bucklers’. They were interesting but became irrelevant, much like Mars Government and Earth Forces. Their attempts to stop ship of aurora, my focus was on that ship and it’s members. They made up my whole enjoyment of the series.

There were more things that became irrelevant to me with Mars Daybreak, cheesy non – memorable opening and ending theme. Whiney president daughter who never shuts up, disappointing english dub. All you might end up caring about is the crazy ship of aurora crew, their risk-taking attempts and how they work as unit. The Ship Of Aurora brings the fun of a pirates life.

Mars Daybreak is a series where it’s not all about serious, major mech fights. It’s the breakthrough I was looking for, to recommend to non – mech fans. It’s an abundance of stupid fun and something I loved every second. Recommend checking out Scott’s review as going into more detail than I. Managed to get him hooked on this series, he actually fell in love with it, like me.

You can watch Mars Daybreak over onTubi Tvand can buy offAmazon  !!

Hope you guys enjoyed my thoughts on Mars Daybreak. I have plenty more gems under my belt, yet to share with you. Your excited right?

Please comment below if you’re not a fan of mecha and this could interest you, knowing no complex plot? Very curious to know !