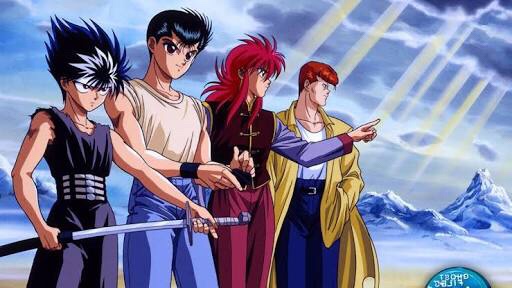 There is nothing better than a 90s anime for me. It’s probably my favourite time era. Each new one I begin, seems to prove this time and time again. Once that itch hits me, was time was to start a beloved childhood shounen many love.

Its been long doing a first impressions in such a long while. Again something they fell of my blog wagon for sometime. But first impressions feel gives me give the chance to feel more free and less formal. Than how in my other posts I may sounds. Lately that 90s itch had been scratching away at me. To start a new 90s series and it’s something I just needed right now to take my mind off crap. Cheesy factor 90s seem to be my cure for making everything feel better.

YuYu Hakusho for in particular my American friends was huge part of their childhood. Anytime I tweet I’m starting a new series, many get excited. Tweeting the other day starting this classic shounen, I knew it would be a frenzy of excitement. I’m 10 episodes in been loving every second, swallowed up man. Did you expect anything less in my reaction honestly?

It’s honestly all good when you feel those good vibes right? Quickly YuYu Hakusho demonstrated this within the first episode. It was hysterical to me having an instant death of Protagonist Yusuke, within the first few minutes. Bullheaded Yusuke is a entertaining protagonist for this super natural crazy ride, his journey to becoming stronger. I can tell will be a worthy watch, within the first few episodes, Yusuke has had rapid growth already. Best thing about Yusuke, he’s not totally immature to a point such compared to sanosuke from Rurouni Kenshin. Sanosuke immaturity levels when it came to fighting, he never played it smart. While feel Yusuke can keep a cool head and actually think in what he’s doing. That makes me like this bull-head more.

Besides Yusuke rest of the characters being introduced so far are all great. Especially Botan, she’s a crackup honestly. Especially in the first episode the scene telling Yusuke his death was a bother, as he was not meant to die. He was just a unexpected loose end to tie up. Botan’s optimism that everything will work out somehow is hysterical to me also, that personality is the best kind to be around. Botan is a winner for me. Keiko whom obvious Yusuke’s love interest I really don’t mind. Keiko’s character might become boring after a while, the one always being saved. Constantly becoming whining. Keiko doesn’t do that for me, her genuine feelings for always worrying over Yusuke’s well being. It’s quite cute, when Yusuke thought no one else cared, Keiko did. So I’m behind Keiko and Yusuke.

Kazuma’s character as a whole amuses me all the time, definitely a misjudged guy. Reminds me of Domon from Flame Of Recca. It’s an early impression for Kurama and Hiei but interested learning more about them. Already having background on Kurama originally a fox demon, early on was surprising to see. Hiei seems like another hot head as thus far only acted selfishly, still keen to more of his background.

YuYu Hakusho has a interesting spirit world set up. Which is already a crazy ride I’ve described. Yusuke the spirit detective..can’t get more cheesier title than that. From seeing what looks to be tournament arcs involved while looking for images in google. Interested to how that connects to Yusuke given role. But I love these silly cases Yusuke is given, adds to the fun factor. Author Yoshihiro Togashi also known for Hunter x Hunter, I’m beginning to see his nack for creating. Entertaining shounen stories, which at some point I’ll need to get back to Hunter x Hunter. 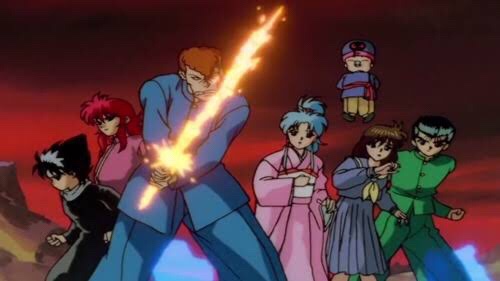 Its a shame really, in my childhood shows like YuYu Hakusho weren’t played over in UK. I would have been like my other friends loving this series for decades. But you always get around to watching it eventually? Enveloped enough in the series so far, brilliant humorous cast of characters and interested spirit world setting. From having seen a few 90s series now, things that appear obvious and predictable to happen. I’ll always run into now when watching new 90s series. Though I’ve certainly never let this take over my enjoyment. I find storytelling from the 90s or behind this to be special with its own flare and complexity. Something you won’t find in newer titles these days. Another post for another time I’ll go into my thoughts about 90s anime stories.

There’s nothing more right now from YuYu Hakusho than to keep up it’s crazy, fun, spirit track. I feel it’s only going to get more fun. Currently watching this in the English dub because 90s dub have a soft spot for and all the voices are excellent. Many recognisable voice actors but I’ll save that for my main discussion. When I finish YuYu Hakusho, because your all going to want that a discussion post? Haha.

Oh yeh. Why is it that the opening and closing themes are so bloody addictive? Because I haven’t skipped through it yet? Lol

Hope you guys enjoyed reading my first thoughts on YuYu Hakusho. Didn’t know this was 112 episodes haha, I’ll be taking my time with this one. For any avoid fans of this shounen classic let me know below why you love it so much?

And no spoiling anything for me in the process. Fun fact also my first blog post using my tablet, not too hard use this way. Going to try and do more first impressions, if anyone wants more of that let me know also. There are a billion series over the years people have asked my thoughts on. Just never got around to it and YuYu Hakusho was one of them.

9 thoughts on “Didn’t Grow Up With Yu Yu Hakusho, Shame I Didn’t”