Why does shoujo only ever want to frustrate us female fans? I recently completed a particular title. In seeking satisfaction from the manga but that was not to be so.

Erika lies through her teeth to her girl click. About having a boyfriend and having done this, that. When the girls want to see a picture of her ‘made up boyfriend’. Erika takes a picture of a random hot guy on the street. Who Erika learns is this prince of her school, upon asking him to pretend to be her boyfriend. Kyoya happily accepts, it’s like a dream. No because Kyoya shows his true colours as a cold black-hearted prince. Finding enjoyment in treating Erika like a dog.

I’m still asking myself the question why, oh why have I watched Wolf Girl and Black Prince twice?

This series is not one of the better shoujo, you quickly learn. From the anime adaptation which at this point in time. Consider to be a guilty pleasure for me. The anime adaptation never gave me the satisfaction I was in search of. Decided to read the entirety of the manga thinking it would at least be better than the anime. 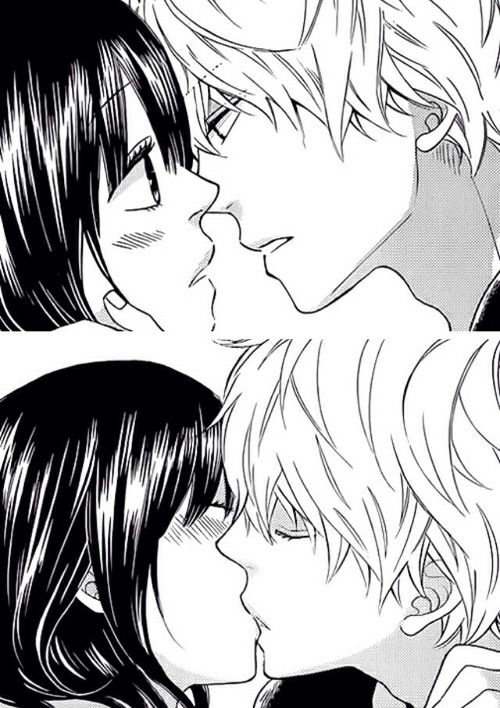 Don’t let this following image above fool you. Oh no.

If anyone has watched or read Wolf Girl and Black Prince. Deemed classed as a ‘abusive’ shoujo for how Kyoya treats Erika. Other shoujo titles I’ve read that fall into this category Midnight Sectary, Blackbird. They are titles shouldn’t have ended up liking so much. They don’t give great representative regarding relationships. Promoting verbal and abusive relations. But when your a full time shoujo lover you know this and you’ll look it over. These themes course I never like to see and think are not right. For why my eyes are drawn to such titles. It’s always a saucy mess and I’m in the shoujo trash pile along with others.

In Midnight Sectary and Blackbird both female protagonists are treated terrible to begin with. There choices in choosing sadist men are not smart ones. Erika find to be least likeable shoujo protagonist in quite some time for me. Erika’s good will nature is not enough, overlooking her naiveness. Compared to the anime, Erika in the manga found even more hard to stand. Going in-depth more, her desperation to not want to be a loner. Fake a persona in front of her girl click in order to fit in. It’s truly pathetic site to witness but what’s even more pathetic. Taking Kyoya’s vulgar, verbal abuse with his snarky comments, like he is better than her in general.

Female protagonists from Midnight Sectary and Blackbird least showed some backbone. Erika attempt at this just turns into a whiney child wanting her candy. You can’t take it seriously therefore I can’t take Erika seriously. Not for one moment during the manga. Let’s face it both in the manga and anime, Erika is pretty pitiful. Nothing could change, fact Erika is a feeble female protagonist.

What A Pairing.. Good God

If your a shoujo fan then you’ll have some couples. That you know don’t work. Kyoya and Erika are the first to make my list. We have a protagonist who isn’t half tolerable. Top of that a cold-hearted sadist who if existed in real life. I’d just want to slap, lets make for the both I’d want to. Going into the manga at least thought, there would be expansion on the pair’s relationship. The potential in so many scenes where it could have been sweet, fell from my expectation.

When later in the manga Kyoya’s background regarding his family and his distrust in women is revealed. My hope was my dislike for him would change a bit. Learning Kyoya’s background didn’t change my opinion of him sadly. Erika only had small break throughs with Kyoya because right up till the end. His cold manner never changed even moments with Erika, where he’s being nice. To me most dislikable male, shoujo lead that’s worst than Kou from Blue Spring Ride. Kyouya’s toy-ful nature in finding amusement using others was a stick out throughout. Dealing with a child.

In the manga the pairs relationship goes more than where the anime didn’t. The usual troupes of a love rival, the misunderstandings that come with shoujo. Were beyond me to even take seriously, it was a joke regarding this pair. Kyoya and Erika are a shoujo pairing I’ll always question of why were such brought together. The two never met one another half way, all the effort came from Erika. Kyoya’s half hearted approach to dating Erika affected greatly in any development on Kyoya’s part. Just a waste really.
The ending for the manga was a ideal one. Yet it was wasted on a pair like this leaving you feeling dissatisfaction. Frustrating.

My Read Wasn’t Complete Waste Though.

Though the manga for Wolf Girl and Black Prince won’t go down. As my favourite shoujo read ever. Side characters as Sanada, Takumi, Nozomi. In fact when all are together there is this hilarious chemistry with everyone. There were many moments that had me in laughter. For dumb situations everyone got themselves. Side characters were more entertaining than our hopeless protagonist pair. Who I didn’t care in the end if they stuck together or not.

No comparison between the manga and anime for this series necessary. Both on the level of unsatisfactory as a shoujo lover.

I’ve wanted to get this out of my system for a while. But my fellow shoujo lovers curious to your opinion. Go to that thing called the comment section and tell me.

What you think of this series manga or anime?Did you find it unsatisfactory or you actually liked it? It’s not a title I’ll be re-reading anytime soon, probably never haha. Shame as I really wanted to like the manga a lot. It just kept failing even when it came to common shoujo troupes. Again frustrating.