Us girls need those times to sink our teeth into something cute that is predictable as anything. It was as transparent what would occur in this shoujo adaptation.

Eighteen year old Kururugi Yuni is not the most expressive individual. People get the wrong impression all the time of Kururugi. In every subject she’s an ace, accept English where Kururugi receives private lessons. From teacher Sakurai. Kururugi eventually becomes infatuated with Sakurai, not a simple crush but love. Upon confession her feelings Sakurai responds by kissing her. Things become complicate between this teacher and student.

Now now, as soon mentioned this film is about a student and teacher. It can sound off-putting. Honestly it really wasn’t that off-putting for me, fact was sweet.

Close Range Love is predictable when it comes to shoujo troupes, but it was an overall satisfying watch. The love between Sakurai and Kururugi would be easy to ridicule as ridiculous because in every day life. You’d be sent to jail. This is why such shoujo stories give female audiences that no fear. Indulging in a hidden desire or lust they have. Mean who wouldn’t want a little fling with there hot teacher.

Because the casting choice for the main leads was spot on. To be taken to that place of sin in the back of my mind. To not feel held back in investment. Kururugi played by Nana Komatsu who seemed to have appeared in a Kids On The Slope and other anime live actions. I was great impressed by Nana’s performance as Kururugi, capturing the awkward nature of her character. Through Kururugi it’s a reminder were all not expressive as others. Takes people a larger look to notice how were feeling and understand us. Sakurai (not that much older than Kururugi I think) only understood a fraction of Kururugi. Believing Kururugi’s feelings were just a temporary phase and it’s sad at times when people can’t take your feelings seriously.

Nana had it down pat of expressing exactly what Kururugi was feeling without words hardly. Her performance was more than convincing simple body language. Scrunching her hand into a fist, showing she either sad or angry. Should be an eye opener in how paying attention to body language is as important as listening. It’d be easy to debate Kururugi as a plain, naive protagonist getting swept up in the moment of things so easily. I thought it was really sweet and genuine in how Kururugi felt towards Sakurai. It’s too adorable when watching to not be swept up by that yourself.

If Sakurai said that to me my feelings are temporary, I’d hit him probably. But can we just take a moment to admire how incredibly hot he is and his character. If I was going to fall into that student and teacher pit it would be with gladly. He is easy on the eyes, things are getting hot here as I write about him. haha.

Sakurai played by Tomohisa Yamashita is a idol which is completely a surprise. His performance as Sakurai was pretty convincing. To me shipping the main pair, oh my heart. The gripping denial Sakurai felt in his feelings for Kururugi had me holding my pillow so tight. DUDE!! Stop denying. Sakurai is the embodiment for me in having a love towards your teacher. Then them accepting there feelings. The scene in the classroom which won’t spoil, was so adorable. Man though the wedge he put between Kururugi and himself, you could see it coming. “No we are teacher and student” Pfft. please. Give in dude. Predictable right there folks

It was funny actually to watch Sakurai antagonise over his feelings for Kururugi. Technically he wasn’t that much older than her. Tomohisa performance as Sakurai had in me sweet sin and beautifully raw. Nothing more on that note.

As cute as Close Range Love is the ridiculous cracks make their appearance. Barely even a couple Sakurai announcing marriage already. Jumping to this so suddenly was stupid and hard to take seriously. Scrap marriage and we could have had the simple focus on them as a couple. I know I said this movie was predictable, but while upon watching was not expecting marriage already. That idea felt forced, ruining the potential of a good beginning for the pair.

Much as I love Kururugi’s character the little gestures, holding her ear when she’s embarrassed. Clutching her hand into a fist was over used at points. Come on girl just speak your mind a tad more. Speaking of more over used the english speaking was rather laughable not in a terrible sense. The pronunciation of certain words in attempt were just funny. I’m like stop just stop with this.

Close Range Love is a teen film that you don’t have to feel bad going to your guilty place. I won’t deny that truly loved this predictable film. The performances from the main leads well as the side characters is solid. Idea of student and teacher love for this film was treated tamely, not advocating a bad idea of this. Common sense really. It’s a film to feel whisked away from all form of logic and become invested in non logic. But done in a cute, appealing way. 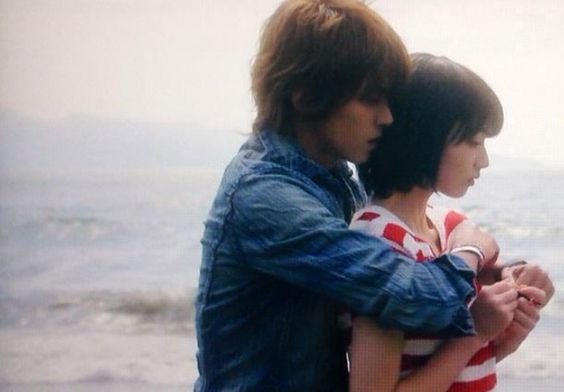 Ugh thinking about this film, makes me want to watch it again. Truly was a great time to let me my mind wonder somewhere else. *cough* Anyway hope you guys enjoyed some drama talk for a change. There will be more to come shortly as my drama game, again went to a low.

But you know those comments down there. You should leave me one and tell me if you’ve seen this film. What your thoughts on it? We can talk teacher and student forbidden love together. haha.