1st March marks the beginning of Mecha March. I’m starting it off with a good old list. List of mecha’s that every time go into battle, know how to get me excited. Can you tell I’m hopeless for a fiery Mech battle.

I don’t know what is about mech battles in general but know how to get me excited. Honestly whenever I’m sad or not had a good day, the next thing I’ll flick on at times is a mecha series. Most of the time Gundam haha. Mecha genre knows my heart and how to make it feel happy, I love it. To put into words how much I love this genre is hard, I’ll do a piece maybe soon enough. How I came to love this genre so much.

But what makes mecha genre what it is. Are the vast mechanical mecha out there with each, in different abilities and capabilities. Over the years of mecha shows I’ve seen, the list of robots themselves that I love. It has gotten very long, imagine someone reading a long degree and the scroll keeps rolling across the room. Not stopping. I’m whittling down out of many favourites just five that plainly I love and kick ass.

Solider Sousuke did not take care of his machine Arm slave Arbalest. Very well. It was an epic moment watching Full Metal Panic for the first time. Mithril deploying Arbalest in the nick of time before Sousuke and other friends were about to die. It’s true that mechs are nothing without their pilots. But Arbalest or referred as Al was quite responsive to Sousuke. Al does have a computer generated personality that responds to it’s whom giving commands. Arbalest was meant to be Sousuke’s machine revealed later in the series At times during the series I’ve liked to think Al has a mind of it’s own still.

One unique ability about Arbalest is the ‘Lambda Driver’. Where whatever you picture in your mind, it manifests into physical power. It took Sousuke a long while to get the hang of this but it was cool to see in action. For the longest time apart of Arbalest head design, his mouth was secretly a dagger. That never crossed my till later revisiting Full Metal Panic. The name Arbalest is cool as well. It’s one cool mecha I’d certainly like to pilot.

I’ll tell you the moment while watching Gundam Seed fell in love with this machine. When the Archangel was about to be shot by the enemy, swooping in like a Falcon. The Freedom appears to save the day, Oh man one of my favourite moments from Gundam Seed. The Freedom is one mobile suit that all of it’s specs are used to the fullest, by pilot Kira Yamato.

When it comes to Gundam series, the upgrade of mobile suits goes up. In watching any Gundam and the Freedom upgrade version known as Strike. What’s special to me about this particular mobile suit is the meaning behind for Kira, of being given it. Kira throughout the series is conflicted about what he is fighting for and protecting. Tossing up between if he is on Zaft or Earth forces. Freedom Strike is top notch above all other mobile suits when it makes it’s appearances. Watching Kira pilot this suit is always entertaining to watch. One of my favourite features is the canon power in the wings it possess. The ‘Dragoon’ known as, being able to shoot eight shots at once. It’s a rainbow of colour shots haha.

It’s a beautiful machine and represents Kira well in his choice to fight for his own reasons and not for anyone else. Eventually he comes to realise.

Out of all on this list the cybody Tauburn is the most graceful. Stardriver is definitely one of the lesser known talked about. Course I’ll make sure to give it mention this Mecha March. Cybodies can only be used if the user has a mark or mask, will only manifest in an another dimensional zone. Known as Zero time.

I’ve been in love with user Takuto’s cybody ‘Tauburn’ machine design for the longest time. Tauburn regal design makes it look like they are ready to go to a ball. The feather top and fancy footwear giving this mecha some old flare. Looks like a musketeer right?. Cybody tauburn is one swift-moving machine in battle, not as brute force as say mechas like Arbalest. How user Takuto fight style is precise and smooth in every attack and movement. It’s entrancing and hard to take my eyes away, everytime Tauburn is about to fight.

One of my favourite abilities of Tauburn is their star swords. They remind you of star trek laser swords. When these swords come out, I’d like to call Tauburn goes into ‘Musketeer mode’. Every movement made in a valiant manner using various slash forward attacks. It’s really exciting to watch when this mecha machine goes into battle, smooth factor.

4. Escaflowne Guymelef (The Vision Of Escaflowne)

Raise your hand if you knew I’d mention Escaflowne.The Vision Of Escaflowne was one big part of getting into the mecha genre. So be cruel of me not to mention. Besides Ancient machines are full of secrets and hidden powers which have always made it fascinating. Escaflowne which is known as a Guymelef an machine that took 150 years to create. It can only be piloted by a worthy king candiate from Fanelia Kingdom.

From having watched a few mecha series over the years, I’ve built up the idea that not all mecha machines are hollow. That they build up connection with their pilots and Escaflowne is a great example. Through a blood pact and requirement of the heart of a dragon, a connection is built. Between wannabe king van and Escaflowne, whenever Escaflowne is injured then Van will feel it. Through the course of the series the bond between machine and Van builds it’s faint to see. If you look closely it’s there. Escaflowne is a machine all on it’s own and will only choose who’s worthy to pilot it.

One of the best abilities of Escaflowne is it can transform into a dragon. Known as ‘dragon armour’ taking the form of a dragon for the purpose of aerial combat. This machine has always been beyond fascination to me and will continue to be. 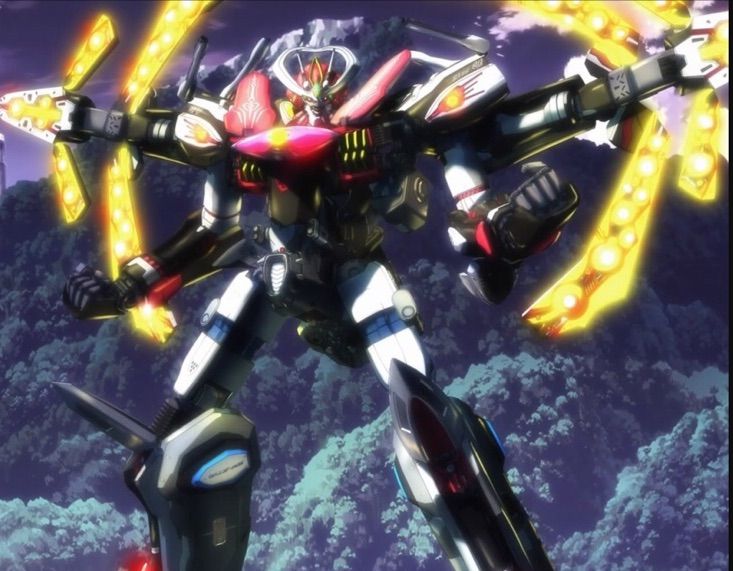 Like Stardriver, the Aquarion saga is a under-appreciated mecha series which I’ll be giving a mention this Mecha March for sure. What is known as ‘Vectors’ three machines combine make up the whole Aquarion mecha. This machine was created in the name of love a twelve thousand year old one.

Only people called ‘Elements’ can use Aquarion by merging all three vectors. Aquarion merging is all dependent on it’s pilots. Aquarion responds to the connection, love and feelings of it’s users. Bringing out the fullest in it’s abilities. I’ve not had a chance to watch the first aquarion series The Genesis Of Aquarion. My introduction into this saga was Aquarion Evol which came after the first Aquarion. I really loved the idea upon the users feelings and bonds, is what this mecha will only respond to.

When a new power of Aquarion is revealed, presented in a over-top sense which is hilarious. Especially user screaming out the name of an attack. But with the driving pilots emotions behind Aquarion attacks, the sentiment is sweet. The over-top battles are always an entertaining, funny watch and another cool ability of Aquarion. Being able to transform into two other forms. Aquarion the mecha of love I call it. haha.

Really hope you enjoyed the first of many Mecha posts. I’m going to be pumping out as many as I can this month. A list was a good way to start don’t you agree?

Please comment belowWhich mecha machines are some of your favourites and why are they? Let’s get the mecha talking a happening. I can’t do that without guys !! So share share !!!

I’ll see you all in the next Mecha Post !!