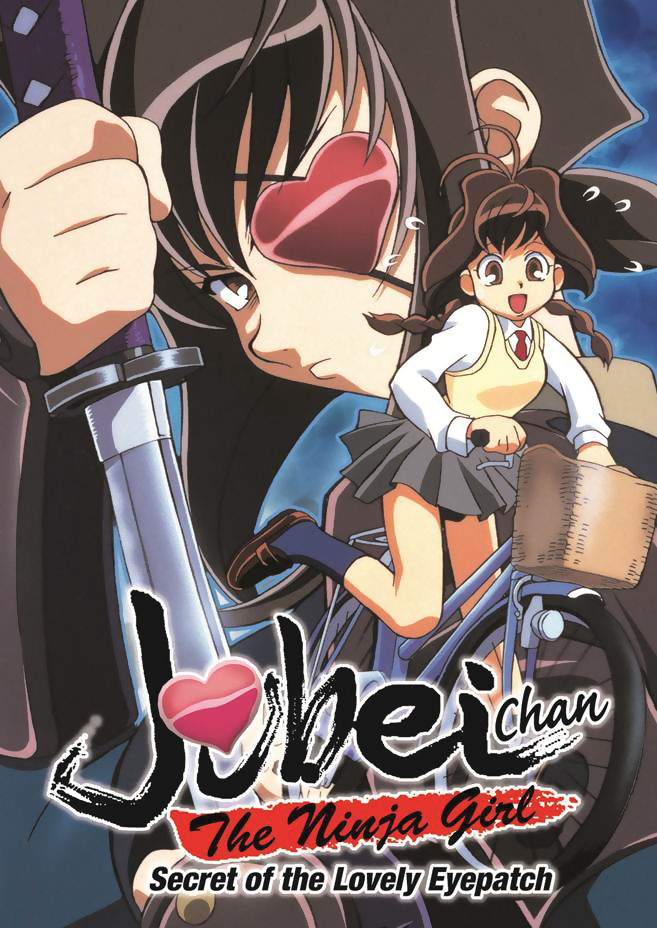 Old anime talk time. It’s about time I did finally did, its been personally driving me insane not seeing any of that content. I have a not known title discovering few years back. Serious ninja story first glance, soon learned this was not the case?

It’s okay to hold a grudge but for 300 years? Between the swordsmanship Yagyui Jubei and Ryujou. Both head of schools rivlary ends after so long Yagyu Juebi defeating Ryujou. Yagyu Jubei entrusting his advisor Koinosuke in search of his successor with the ‘The Lovely Eyepatch’. Koniosuke after 300 years finds fifteen year old Jiyu, who Koniosuke tells Jiyu is the reincarnation of Yagyu Jubei. Members from Ryujou clan are out for revenge after so long, forcing Jiyu to take up using the the lovely eye patch.

It’s been since last September doing a post like this, which your welcome to check out my previous one. Where I cover feudal tale Inuyasha. I’ve not been bringing the good old stuff yet to the blog, myself keep harming on about. There are plenty of gems have yet to discuss on my blog and starting off with a personal favourite. Jubei The Ninja Girl was a surprising find because it was not at all I imagined. That it’s a stupid, comedic ride that is hard to take seriously. I’ll guarantee this funny series will make you laugh at some point.

The heart of this series is it’s cast, which is something I quickly learned at the beginning. Every character has their own unique flare and quirks. Every character some point has their own out bursts moment about the stupidest things. But it’s hilarious. Jubei’s father overprotective nature over Jiyu weighs out ten fold how your parents might react. Three goofy monkey trio which I refer to them as. Their character designs make them look like monkey’s don’t you think? The monkey trio are the definition of stupid but they always have good intentions. Especially when it comes to protecting their Jiyu.

Everyone in this show wants to protect Jiyu for some reason. Class mate Shiro, good guy but as they say good guys finish last. The attempts to make Jiyu notice his feelings go under the radar completely. One of my favourites Koniosuke again so good hearted, but his attempt at to help in a situation usually back fires. His constant banter to Jiyu to acknowledge her role as the new successor is hilarious to watch. Also makes me feel bad for the guy. The Ryujou clan who every episode make their advances of revenge, which can’t be taken at all seriously.

With everyone’s quirky personalities they’ll see to it to make you laugh.

Samurai, ninja you would think right lots of action, and lots of plot twists? Far from it when it comes to Jubei The Ninja Girl while I’ll say more towards the end. When the series decides then to go into serious mode. Rest of the time it is harmless stupidity that it’s intent to be that way. The name of this series is “funny” something to be able to coast through. At your leisure to fully enjoy to the fullest.

Every episode their is a so called new ‘threat’, monster sometimes. That Jiyu encounters sent by the Ryujou clan in the name of revenge, against Yagyu Jubei. Seeing Jiyu transform and fight is entertaining but not as entertaining. When at points Jiyu doesn’t even feel like fighting, the attitude of “I’m done”. Her acknowledge to take the role of being the successor to Yagyu Jubei is outstandingly funny. The enemy itself the Ryujou clan are a joke as the opposition are a joke at their failing attempts at revenge.

The monkey trio and Shiro facing off nearly every time, for who will protect miss Jiyu. You’ll quickly realise what idiots they are but funny idiots. From first watching this series the times the show looked like serious mode was about to active. Only to find myself crying laughter instead.

Comedy factor is the shows best strength for certain.

One thing that most impressed is how the series balances with the silly factor. Because going from before the other half series plot is serious. In dealing with certain characters individual emotions and feelings which makes you feel such reflection. It knows how you tap into your soft spots from real perspectives. Koniosuke’s long 300 year search for Yagyu Jubei successor takes a serious toll on him. Jiyu herself is conflicted with this new-found responsibility and issues with her father. Even though before saying the Ryujou are a joke, they have unsatisfied frustration from a 300 year old grudge.

While this series ability to make you laugh is effortless, it’s ability to tap into relatable real life aspects. It is impressive honestly. In other areas of the series lacking in character designs, over the top stupid situations. All of this can be looked over easily in the series great balance of comedic and emotional factor.

Crying and laughing will happen.

Jubei The Ninja Girl is stupid and funny reminded me of Full Metal Panic in that way. But the deepness is their regarding it’s individual characters emotions and other dealings. Prepare for if you watch this series, which totally recommend you do. For silly and whacky factor that will turn any sucky, negative emotions you might have festering. Into a big smile along with laughs. That’s this series great ability which is effortless to make you laugh. This is why I love Jubei The Ninja Girl so much, it’s definitely something less expected from what I initially thought. Action packed ninja series.

I’ve only covered the first series as there is a second season Jubei-chan 2: The Counterattack of Siberia Yagyu. Which is evens sillier, but definitely is more serious than the first series. That has a lot more fight sequences along with the orchestral OST which is varied mixed of interesting instruments used. Do I say watch that one too? Yes I enjoy both seasons for their own reasons. The comedic does not slacken one bit.

Hope you guys enjoyed this post and let me know down below… you know *winks* Tell me if you’ve discovered something new or Lita has convinced you to give this series a try.

Have I ever recommended anything lack luster to you guys? I could not do that.

For now I’ll see you all in the next post!!