It’s been a while my friends since me doing a update, which was in March. It’s about time for another one, Spring is in bloom. Seems like a good time to me.

Probably going cold for other parts in the world but when your living on the other side of the hemisphere. Still weird saying it’s spring and it’s getting warm but from my point very glad about that. Though not glad about the 40 degree oven days that will be ahead, only thing about Australian summer majorly dislike, if your wondering that is 104F.

This will be the last update for this year so there is a fair bit for me to go through. Potentially this post won’t be more than 1,500 words hoping… hoping. But with coming to end of the year wanted to go through things I do here on the inter webs.

Let’s just get into to.

First thing to briefly go over as I revealed for last month. My goal to post for the whole month in September was another crazy challenge to set myself. Which it went really well till the end, work got really busy in the last week and missed out on 4 days. So 3/4 nearly completed is pretty good, very happy with the content I put out. My goal was to have good quality articles to redeem myself from 2016 attempt at this. Feel I achieved my goal but maybe If I do it next year, plan a more ahead just a tad more. If your thinking of taking this kind of challenge recommend reading my wrap up from last year, giving tips on the best way to get ahead, not burn out.

Listening To Your Own Judgement – Anime Hype

We All Don’t Know Where Were Going | Solanin

Things has changed over on my channel which is my schedule, I was uploading weekly every Sunday. But with all of my hobbies I have, don’t have enough time on a weekly basis to dedicate to doing a video. Now I just upload whenever feel the urge to make a video. Lately I’ve been uploading weekly and this is just working better for me, going back to how I use to do it. It’s all about trial and error.

Another thing I announced few months ago I was stopping my segment “Lita’s Anime Thoughts” was reviews basically but decided to word it different. My reviews feel were no different from anyone else’s, it’s hard to stand out where reviewing anime is so saturated already. Nothing really can do about that but how I go about addressing anime can be seen in my Escaflowne video. Where going over my love for this dear favourite and why it’s more than a romance/mecha, it explores much deeper themes. Ever since doing this video decided this would be new direction for talking about series, particularly older, unknown titles.

Youtube is a second outlet for me to express my anime love so this will always come secondary. Hoping the week before Christmas I’ll hold a Birthday Stream this year, my birthday falls on Christmas week and it is not Christmas day haha. As people have said previously to me but be a good excuse to host a stream. When it’s gets closer to the date I’ll announce the details here and on my twitter. 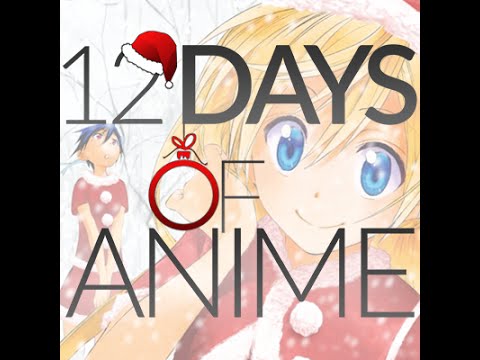 If you don’t know about the Twelve days of anime well now you do. It’s been held every year for the last few years, a fun event for ani bloggers and youtubers. To recollect their favourite anime moments of this year. I failed this challenge last year due the time of year is always busy but decided to try and redeem myself. If I can manage a month of posting (well nearly) then I can do this. Doing it on my youtube is more work honestly but could end up changing my mind will see. But either way I’ll be doing this, squeeze it in.

It’s been a couple of months since me and Shay did a podcast just both our lives have been busy. Our podcast is not dying out, trying to plan one for at least before the end of the year. People have been asking recently want to reassure people, we won’t be going anywhere. Follow our twitter to keep up to date with the podcast. It’s funny I’ve said this before in my last update I’d focus on older titles. I didn’t achieve that. My anime watching has been all over the place, watching more seasonal since march and newer shows. but wish to refocus my attention to watching older titles at least watch a few towards the end of the year. Ceries celestial legend has been one on my list for a long time, been dying to buy it in fact. Seems to be my weakness with older anime as well buying blindly that’s where it can get bad my buying. But main point is hoping to direct 1/4 content towards older shows.

Originally announced I’d be reviewing the ancient magus bride every Sunday. That was my intent but after watching episode two, honestly felt like watching this show at my own leisure. so that means I won’t be doing episodic reviews for it, sorry to those who were looking forward to that. But this show just makes me feel like enjoying it in my own time but I fully intent to write a piece on the series. So don’t worry about that.

Guest Posting On My Blog

This is the last update for you guys but I’ll be introducing to my blog new way to find new bloggers other than my Friday feature. I’ll be letting people guest on my blog but have yet to finalise details which I’ll be adding a whole page talking about some rules, how it will work. But I’m really excited about this, hope you guys are as well. Hopefully by end of this week I’ll have the page up officially, I’ll do a post going into detail probably. This will be great exposure for other blogs and for our blogging community here on word press.

So this update managed to stay under 1,500 words as a goal. There will be no more updates for the remainder of this year till the new year though that is. Honestly for the rest of the year I’ll be taking it easy with my blog and youtube. I’ve been getting back into my art recently and hopefully by the new year I can return to my muchly missed AMV making.

My blog schedule is remaining the same and will be doing my best to pump all these blog posts still want to write.

Leave any comments down below