Ever felt like from going out anywhere, doing an activity. Coming back and watching a series you’d nearly forgotten about. Well exactly what occurred here.

“Three hundred years after the drastic devastation, genetic mutated trees broke free from a facility on the moon. Since then the trees, forest rule the planet with what civilisation is left, young Agito discovered a girl in a long slumber. Toola is from all that time ago, now seeks in the choice to change the current world or live how all is now”


How this post came to be is a laughable just from a hike I went on couple of weeks ago. This place went to hiking was beautiful, has been a long while doing a outdoor activity, felt really good. Upon coming home looked at my shelf saw Origin film poking out, that evening found myself rewatching it. Second time watching feelings have drastically changed not in a negative way but left feeling enlighten.

After watching the film a second time, Noticed there was a hour documentary in the extra options. It was about the making of Origin, and was thoroughly very interesting, which lead me into such a new appreciation for this film. Origin came out in 2006 but before that it was revealed seven years of prior work had been poured into this 95 minute movie. Director Keiichi Sugiyama had an interesting insight in how he wanted this film to turn out, Keiichi is very unheard of. Hardly since origin has worked on anything else but it was clear how much he cared about this project. From the classical, memorable soundtrack to neutral. earthy animation colours. Such careful thinking and care was poured into Origin, most obvious way to see this right off the bat is the opening sequence.

The following video above is movie’s introduction along with the memorising lyrics voiced by Japanese singer Kokia .  It is her insanely, captivating voice that makes this scene so memorable, through the lyrics:

The seed of silence fell,
a wave of ripples shoot out.

The noise shook the cold forest in my heart.
I can co-exist with it, sometimes.

No one in the forest can hear the slience voice.
Nor the noise under my falling tears.

The Barrier is broken,
the moon dragon god is crying.
with Reflection.

She expresses a song of love, in that people can be themselves by having that one person. Such a entrancing sequence to watch when beginning this movie. Director Keiichi felt very strongly in how people would interpret his film such he mentioned the humanity vs nature, the love of a parent. How myself interpreting this film the stronger theme of nature vs humans is what stuck out most. They have been genetically mutated trees but in the sci fi, steampunk world’s setting, it fitted the representation. In the meaning to respect our nature, not abuse or take for granted, Agito’s character exampled this truth. Asking the forests power to enhance his abilities to stop Toola and set everything back right.

Agito learns of the truth behind the power of the forests, believing he can teach everyone not to be so hostile towards the forest, trees. As someone who is a nature lover, discovering a new oasis of places brings me joy. I just loved this film displayed this strong theme, in a respective light. 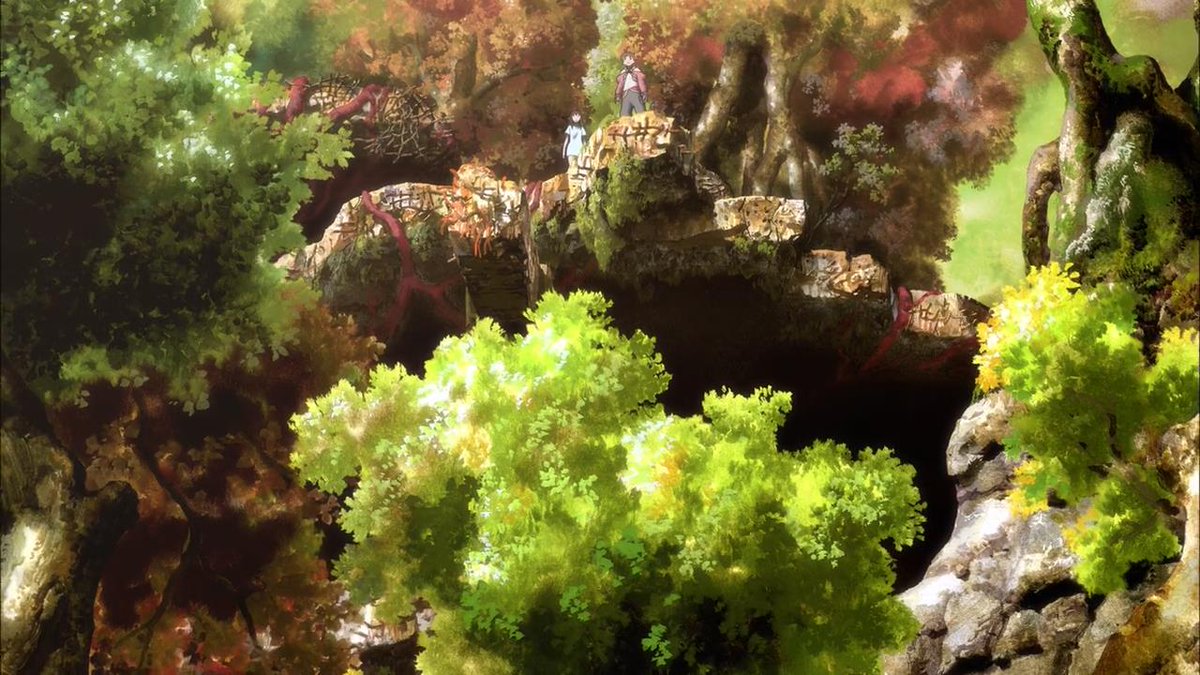 Origin’s best strengths is animation without question, Gonzo did a fantastic job, reminded me a lot the setting in Shangri-la. Another well animated show I enjoyed by Gonzo. The representation in respecting our nature and protagonist Agito very likeable and good, strong lead for the story. Along side strong animation, Director Keiichi wanted music to be a strong suit, fun fact when watching the making of origin. Keiichi went all the way to poland, to meet Warsaw National Philharmonic Orchestra who are behind the classical element. It gave me insight in what lengths animators will go to to achieve exactly what they want in their works.

Though having a new appreciation for Origin, something for the future I could re-watch did still have minor issues with. The pacing of the story from when Agito discovered Toola, then her suddenly deciding wanting to change current world. Toola’s character was very naive in how easily manipulated she was, which only thing negative about Toola. Have to remember waking up after three hundred years, adjusting I’d be a lost lamb too. As for the other character cast nothing standing out, all played their well according to the story, Agito was the only stand out.

Trying to keep things brief as don’t want to spoil. Origin in my opinion is a refreshing thing to watch. In no way I feel you’ll be wasting your time giving it go, it’s one of my favourite things to come from Studio Gonzo. You build up your own interpretation of what you watch, read Origin from Director Keiichi sees this film as something that can be seen in different ways. From earlier saying what I got from it was about nature, that we shouldn’t abuse it but take of it. It’s something that I’ve always strongly lived by and represented beautifully. It was good to revisit this film, don’t think I would have for a long time if not feeling how I felt after that hike from two weeks ago.

It’s my hope with this particular post, I’ve at least made you feel like giving this refreshing film a go. Will say if you liked the series Shangri-La, then you’ll like Origin If you have seen it please leave a comment below!!