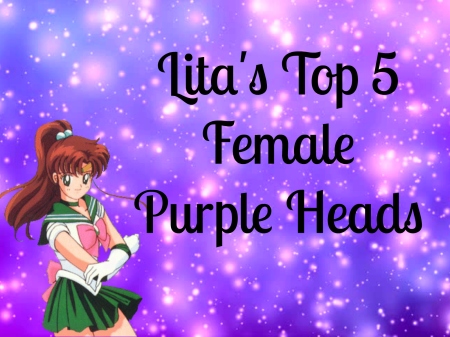 February was last time I did this fun segment, too long so now it’s time to look at some purple anime ladies. This list is always in no particular order.

Chiskai feel like I’ve been mentioning a fair bit on this blog. She has a special place with me as one of my favourite characters from Nagi No Asukara. A trait in her noticing that was similar to something, I’ve never coped with change life whether be work, family. Her essence of honesty towards this feeling regarding her closest friends, just hit me like a wave in the face. Always feel like I’m looking at a mirror through characters, reflecting parts of ourselves that is spot on, not realising till it hits us. It’s what happened with Chisaki the reason fell in love with her whole character. Chisaki’s high regard in thinking about her relationship changing with her group of friends, is reflective realism displayed so bittersweet in Nagi No Asukara. All up just such a cutie.

Crazy, Crazy, is the best way to describe Minene from Future Diary. This series was a thrilling, insane watch *cough* Yuno… Need I say more honestly. You know when you have a character you don’t like at the beginning but then by the end you love them. That was Minene, the bomb expert I’d have in my “The zombie apocalypse team” She’s definitely up there in favourite kick ass females for sure. It was unexpected in the second half when the plot takes a turn and we see another side of her. Police Rookie Nishijimam exposes a semi girly side of Minene you’d not expect, this is what made me like her character more. She may be crazy in some departments but not a character that should be undermined easily. Bad ass bomb girl.

Mikono could be on this list because for being just a cutie but that is not the only reason. Among all the pilots she was the only whom did not possess a ability, feeling so useless. Her ability was staring at her in the face, having such a big heart the power of connection was her quirk. Being able to connect, breaking through any doubt her fellow pilot/friends may be devoured in. Taking up this new quirk she embraces holy was reflective sense in when you find that one thing you are good at. Despite first quarter of series, not making a strong impression on me took a while for her character to come through. She’s one high on my list been wanting to cosplay for a long time, and still is so another cutie like Chisaki. Karin most ditzy anime character I know but while watching Chibi vampire by the way hilarious series. Karin just made me laugh no end in her ditzy nature catching her out, she’s an unfortunate case of a vampire. Instead of absorbing all her blood consumption, she gets nosebleeds spurt blast everywhere. Unique thing about the series each vampire drinks away people’s negative feelings such as anxiety, frustration. Just at sixteen it’s all a bit much for poor Karin but how she interacts with her family is hilarious and again her oblivious, ditziness to the obvious things. Eventually I’ll talk about this series in a post but Karin such a sweetie, I’d love to have as a friend.

Karin does an the oddest hair shape out of all on this list.

I hold both Kenshin and Kaoru is the highest regard for their own reasons alone. Kaoru was the rock kenshin needed to hold him together the first one, who never judged or asked about this past. Even after all they go through Kaoru treats Kenshin all the same, which to me I consider her brave. A time Kenshin walked away from her and the others did Kenshin never think she or they would follow. Kaoru’s attachment to Kenshin is childish, slightly selfish at first but becomes really endearing in the end. It showed Kaoru’s immature age in the beginning, this nice build up in her maturity is what made me, love the idea of them together.

Out of the girls on this list Kaori’s hair I’d want.

There you have it my favourited purple haired ladies. If you missed out here are my green haired favourites from last round up. Next one will be a boys one chosen colour not sure yet.

But please do indeed comment below your favourite purple beauties XD