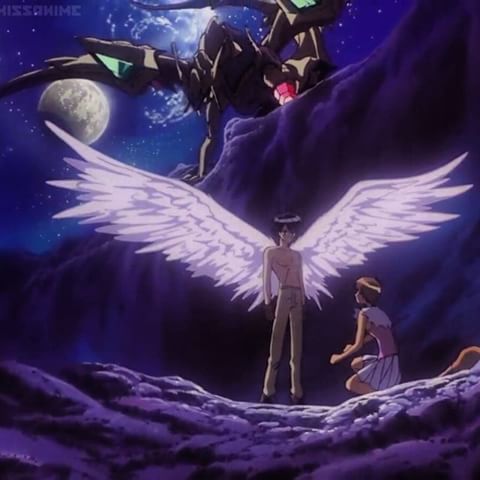 One goal of this year was to do more blogger collaborations, mentioning in a post not remember which one. The odds of timing when two bloggers I know began watching a series that is my favourite anime…. like ever.

It’s been too long since one of these posts has happened but so happy to be writing this currently. Funny thing back in April only then I had decided with some free time, that it was a good opportunity to take on a collaboration or two. The timing of all of this was deja vu honestly as Scott from Mechanical Reviews and Hazel From Archi- Anime both starting watching a show I love to death. Watching it at the same time it was hilarious too me honestly, but then… it got my brain ticking to do a collaboration piece with them. Here we are now !!

The Vision of Escaflowne already I’ve talked about in my editorial piece on it. Not super proud of that piece, as trying to justice of highlighting the wonders of this 90’s series. Hazel and Scott had never seen this series and after they had finishing it, I sent them some questions directing towards their experience with this series. But at times never being able to answer others of my favourite anime, picking your anime favourites is too hard. Speaking about beforehand but this is the most series, I’ve rewatched countless times so I can say it with full confidence. It’s my favourite anime beyond others.

My wish with this blog collaboration is people become interested in trying out this series, as I’ve found with Escaflowne people think it’s Mecha, only robots. So much more to it, it’s not a 10/10 anime I could agree with this but takes on a lot of themes, handles it so well .

Let’s find out then first what were Scott and Hazel’s overall experience with this series?

1. Before watching Escaflowne, did you know anything about it?

Before watching the series, I only knew the specifications about the show. I know that Shoji Kawamori, the writer of one of my favorite series Super Dimensional Fortress Macross was behind it so I expected some sort of live triangle, it was made in the mid 1990’s, and the studio was Sunrise. After all that, nothing at all. Still, all of that was enough for me to be interested in it and finally watch it.

2. What was your first impression from the first three episodes?

My first impression of the series was that it was alright. At that moment, it felt like yet another series were a normal high schooler went into a fantasy world for shenanigins and things. Oh how wrong I was.

3. Escaflowne is more than what it seems. Did the different themes intertwined together in the plot surprise you?

Yes and no. The first episode hinted at something fantastical and I liked how that one thing became more and more important as the show went on. It made it seem even more nuanced. The final bomb drop of “this is bad, you shouldn’t be doing what you are doing” hit that one theme home. Also war is bad is a mech series cliché, but it’s a theme that played well into the series as well because of the tragedy war has brought on people. Oh, and love too. That one is very important.

4. What was a favourite moment from the series you liked or loved?

My favourite parts are the fantastical elements. Watching the Escaflowne turn into a dragon for the first time is my favourite though.

I was not an absolutely fan of the ending. I don’t mean the fact that the show ended, but the last two episodes. It felt like either the creators didn’t have a complete plan on how they wanted to end the series or they were forced the rush the show for one reason or another. There was a character reveal that came out of nowhere and so many plot threads felt forced into closure. Along with Hitomi going back to Earth. No explanation.

6. What did you think of the various music used in the series by Yoko Kanno?

Loved it. Loved it, loved it, loved it. Like every other soundtrack that Yoko Kanno has ever worked on, this one gave the series its style and feel. I should have known that it was her when couldn’t recognise any other specific styles. The soundtrack influenced me to write a post about her. *Points dramatically at it*

7. Would you recommend this to others what was the final verdict about this series?

Oh yes, I recommend this series to others. Even if the ending sucked for me, the journey is what made watching the show completely worth it. If I was to give this anime a score, which I never do these days, it would be an 8/10. It’s not just another shoujo fantasy world romance series, there is a lot going on in the show that makes it something deeper and more complex.

1. Before watching Escaflowne did you know anything about it?

I had zero idea about this show. I was just hanging out with a really good friend discussing anime, and he just brought up Escaflowne and told me that I had to absolutely watch this show. He just told me it was a really good mix of everything and since I wasn’t huge on the idea of mecha he said it would be a good one to start with since I’m definitely more into the fantasy genre.

2. What was your first impression from the first three episodes ?

At first the art was a bit jarring since it is an older anime, and I struggled with the Dub of it. I’m curious to know what this sounds like in Japanese since the dubbed version was that was available to me. I also just found out that Funimation has all of it subbed, so I may have to revisit this anime now in it’s subbed form!! At first I really found Hitomi annoying, and Van a bit too headstrong and a bit bratty – but my opinion of him really grew over the course of the story and ended up becoming best boy of the series. I was definitely attached to Allen at the beginning – he seemed to be the epitome of a knight when we first meet him.

3. Escaflowne is more than what it seems, Did the different themes intertwined together in the plot surprise you?

I was definitely surprised at how the many different elements of the story actually held their own in such a cohesive manner. This anime definitely has everything something someone is bound to love one way or another.

4. What was a favourite moment from the series you liked or loved?

Lita, I can’t believe you’re making me choose one moment from this series!! D: But if I absolutely had to choose…it would be the scene where Van decides to fly Escaflowne as high as he can towards the mystic moon so that he can see Hitomi again. They reconnect again in the same way they met in the first episode, with her running towards him. Van says, “I’ll never let you go again.” It’s such a romantic scene especially with the music. I remember completely losing my cool and fan girling like mad when Van flew in on Escaflowne held out his hand to take Hitomi’s hand in his, and he dropped those lines. Definitely was my favourite scene of the series.

I felt a little jilted by the ending. Hitomi and Van didn’t get to live happily ever after, and it was a bit open ended. I also felt that Van’s character was a bit neglected in the second half and the focus got shifted a lot to Allen. So when Van finally came back into the fold of the love story, it felt that it was a little too late; Allen just had way too much screen time over Van, even though Van is supposed to be the main love interest.

6. What did you think of the various music used in the series by Yoko Kanno?

Yoko Kanno is a musical genius. This was my first anime listening to anything from her, and I absolutely loved all the arrangements. The soundtrack had a very magical ethereal feel to it. I’m all for musical scores and music being able to evoke emotions and depict the tone of a scene as well as bring up the drama level of a scene as well. I recently found out she was also the composer of the anime “kids on the slope” whose soundtrack also blew me away.

7. Would you recommend this to others and what was the final verdict about this series?

Escaflowne is a such a great anime that encompasses a lot of elements that just work together. Despite the open ended story of Van and Hitomi, (I wonder if they ever saw each other again?) I really loved the progression of their feelings towards one another. I loved the action and the mecha part.  There were just so much to love about this anime. I would definitely recommend this to others.

So Scott and Hazel over all really enjoyed Escaflowne, The majority of what they said, honestly fully agree with them. This isn’t a perfect show even myself knowing that, yet it being my favourite series of all time. This insight into others minds I hope will make those who feel this series is just all mecha, see it’s beyond that. Someone I know that hates Mecha anime, starting watching this not long ago and was surprised herself.

I hope you give this is a show a go one day if you have not and enjoyed this special interview blogger collaboration. Hope to do more of this sort of thing in the future and if you wish or are interested in collaborating please fill out a form on my Contact page.

Please go check out Scott and Hazel’s blogs their fabulous bloggers and I thank them for joining in this collaboration.

Leave any thoughts you have about Escaflowne down below !!!