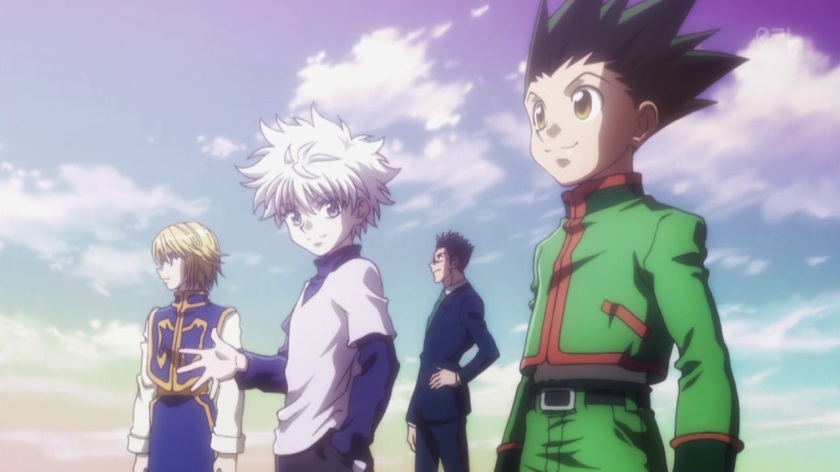 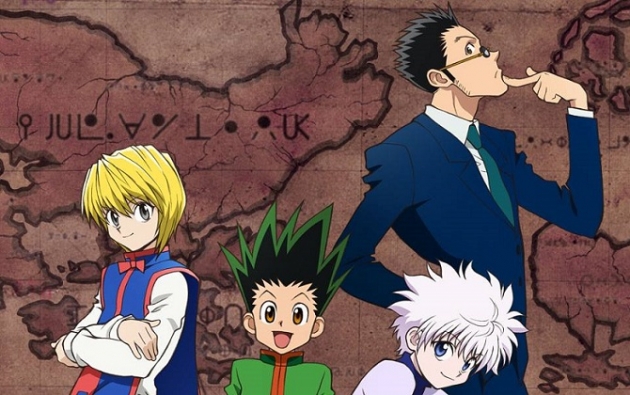 This series is the most nagged for me to watch, in all of my years of watching anime.
Finally…. I’m listening to those.


“Hunter x Hunter is greatness” is what people, I know whom adore this show so much. Coming into this I already knew there was a 1999 version as 2011 is a reboot, but glad I started with this one. I did a first impressions video on hunter x hunter on my channel and will be making vlogs of my experience with the series. Feel free to keep up with those if you want to on my channel but I wanted to at the same time give my impressions here. Since making my impression video I am currently up to episode 28 and will be making another vlog for this Sunday’s video, what I’ve seen up till then. My first impression in this post will be from 1 to 10 roughly.

So has hunter x hunter made it’s greatness impression upon me?

Well to start things off watching the first two episodes I wasn’t feeling it but this will only early days. Typically for me a series like Hunter x Hunter, I don’t go out of my way to watch, infact purposely avoid it but after episode two, soon became interested in where this series was going. The main plot doesn’t give away much twelve year old Gon wants to take the hunter exam to become a hunter. Gon wants to find his dad who left him behind and has not seen for years. Our main protagonist… honestly thought Gon wouldn’t make any impression. Oh my people this boy is the cutest anime child, I have ever felt invested in. Honestly stunned me in moments example, he came across Hisoka especially when trying to get his tag, this kid has balls. Gon’s character has been a surprise to me, a care free, natured kid but underneath he is thinking beyond his age. Especially when it comes to his goal of finding his dad and wanting to become a hunter, he acts like wanting candy.

Though just a kid Gon’s best quality so far I love is he knows his goals, want he wants to achieve. But makes me worried along the way this innocent boy will become corrupt along the way. You are not allowed to taint this pure, honest boy that I already love so much. I’m highly anticipating now when he finally gets to see his dad but from what I have watched up until now will be a fair while. 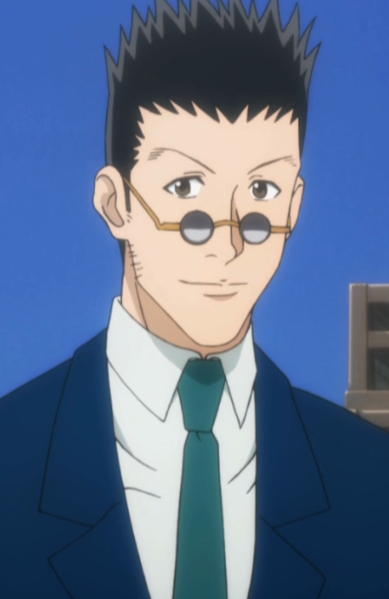 Am I the only one here that will be questioning Leorio’s age, as watching past episode seven was revealed he was around Kura pika’s age. Talking seventeen here but that would just seem weird to me as look at him… Does he look that to you? Noone tell me what age he is as I’m sure ill find out and I won’t look it up. Leorio is a hilarious, loud character, the others are always out doing him in certain situations. What surprised me in the series there are people who are non human, Leorio is your average human trying to become a hunter. He has no special powers what so ever so makes me curious of how he obtains getting a power, I’m only assuming here though.

First few episodes in we learn about Leorio true intentions for wanting to become a hunter, first off he brags just for the money. He confesses to Kurapika during the first phase of the exam that there was a friend he could not save from an illness. It was easily treatable and didn’t have enough money to afford the treatment. At this point I was saying to myself dam another character I already love a lot, Leorio is a barrel of laughs and I just see him as this father figure to the Killua, Gon and Kurapika. Adorable. 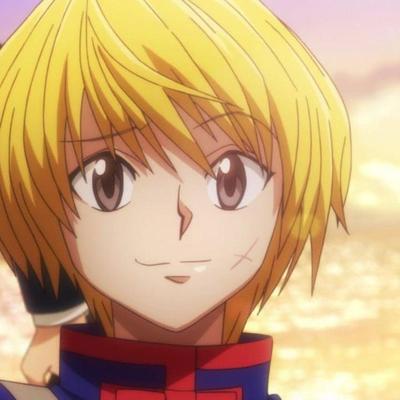 I thought Kurapika was the same age as Killua and Gon, apparently as I learn he is not, thats embarrassing. Learning about why Kurapika wants to be a hunter for revenge, again was not expecting that from humble natured him. For certain there will be a arc on Kurapika on getting his revenge for this clan upon the phantom troupe. I’ve looked up the group, they just look scary to me and I’ve been told there are some good villains in hunter x hunter. Kurapika’s scarlet power when his eyes change colour are a bit mysterious, but at one point during in the tower during a match. Kura’s personality just changed and legitimately freaked me out a little, just these boys seem to have a suppressed anger within them selves. Best trait about Kurapika is his strategic thinking, saved the others hide already at times. He brings the brains to the group and love him a lot already along with Leorio and Gon. 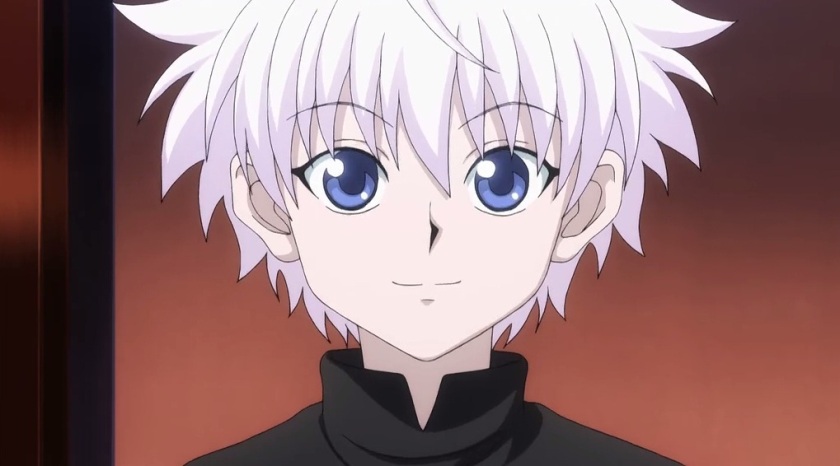 Everybody said to me Killua would be my favourite out of the group. Killua is a cool character but he’s not my favourite, sorry it’s Gon so far. I already knew some backstory on Killua beforehand from another blog post and knew it was dark. I feel sorry a lot for him, being deprived of the things in life we experience every day. Brainwashed assassin since of a young age, but it’s cute when he meets Gon and the others. It was instant noticing Gon and Killua hitting it off at the start, their growing friendship is adorable to watch so far. Gon will be the one to save Killua’s fragile mind, please save it… this child doesn’t deserve the turmoil he is going through. No denying this kid has more assassin skill than you or I, so Killua will become only more fierce as the series progresses, I sense. 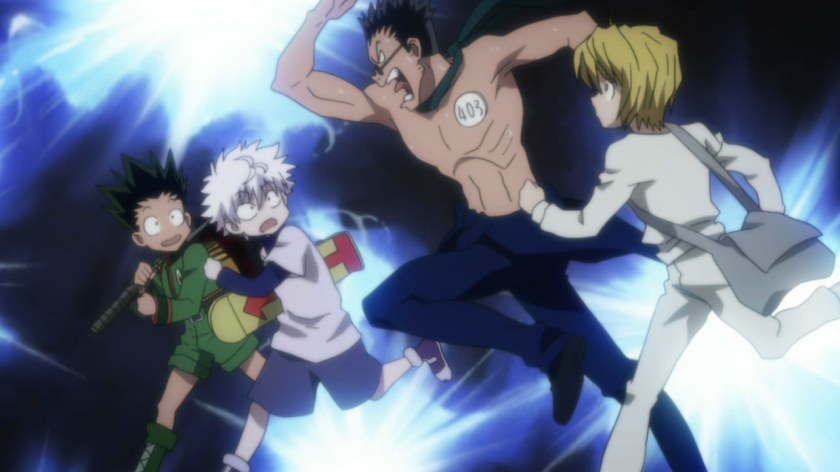 So our main group of characters made a everlasting impression on me, I love all of them for their own unique traits and their individual back stories. This series is more than what I thought it would be in terms of plot. The whole hunter exam itself just sent me for a loop of the brutal reality of it and becoming a hunter. All the participants are out for themselves, loved the ruthless aura among everyone, it got me all excited. Their hunter examiners are a interesting bunch specially french mustache Satotz, who does phase one. All the characters in Hunter x Hunter are strange yet unique. Hunter x Hunter knows how to set the scene through it’s characters, already, which has impressed me more than anything. For any new comers like me just get through the first two episodes then the pace picks up really well.

While at the same time knowing how to set the tension atmosphere, there is a great comedy flow among. It’s clear things are only going to get tougher from now but all our main characters have their own way of making you laugh. Hunter x Hunter handles a tremendous level of engaging combat factor and quirky comedy, which has broken up for me points in the series, where something big will happen. For example from the first phase of the exam, all the participants are running for hours on end. At one point Leorio looks like he is going to give up, people spout of him just being a human, not making it through. Suddenly Leorio lets out this burst of drive which was hilarious to me and broke up that peaked moment.

While talking about loving all the characters in the series, there is one I must address. Mr Hisoka who is as creepy as Alucard from Hellsing, just gave me a bad impression all together. At the same time of being just creepy, I am fascinated by his character, currently I was confused in is watchful eye on the boys, won’t spoil it for anyone else. All I’ll say is he is a man who strives for his prey, watching them grow in the creepiest way possible. It will be interesting to learn more about his character, as he is a shroud of mysterious at this point.

Now to answer the begging question?

So has hunter x hunter made it’s greatness impression upon me?

Indeed it has. Watching Hunter x Hunter reminded of one of my first adventure type series, that use to air on toonami. Rave Master  which you all should go watch by the way as it’s the same manga author who wrote Fairy Tail. For the first time in a long time, I can say the hype surrounding Hunter x Hunter is deemed to be true. This show had me fooled and is more that what it seems, some very driven character development in this series. That is what I love most about this series so far, I am just excited to continue on slowly as its 148 episodes people…. going to take me a while. Actually going to be continuing this series with another friend, so that will be fun.

Are you all happy now? I’m on the Hunter bandwagon.

Follow me on my Twitter !! if your not for at times I live tweet, when I will be watching Hunter x Hunter. Get to see me either creeped out or just shocked.

I hope you guys enjoyed this first impression and tell me down below why you love this series so much? or has your interested been peeked into?