This is the second review as part of my 300 followers special if anyone didn’t know people had to pick from 20 anime, the five with most votes I would watch and review. One of your choices was long overdue for me to see the kick ass Yona Of The Dawn.

Princess Yona lives a life of luxury and ease, completely sheltered from the problems of the seemingly peaceful Kingdom of Kouka; however, the sudden murder of the king and betrayal of her beloved cousin Su-won places Yona’s life in mortal peril. Forced to escape only with Son Hak, who is both her childhood friend and bodyguard, the naïve princess soon discovers that Kouka is not the idyllic place she envisioned it to be. Poverty, strife, and corruption run rampant, making reclaiming the throne nothing more than a wishful fantasy given the kingdom’s current state.

Based on the popular manga of the same name by Mizuho Kusanagi, Akatsuki no Yona follows Princess Yona on a coming-of-age adventure as she faces the harsh realities of her kingdom. With only a mysterious legend to guide her, Yona must discover a way to restore Kouka to its former glory while being pursued relentlessly by the forces of the new King of Kouka.

Yona of The Dawn why have you left me with this big void in my heart? I had to rewatch Fushigi Yugi to fill that void which cured me for a little while. From the first introduction words you guys can probably tell I ended up loving this show, it’s hard for me even now to think of a fault wrong with it. I had  a adventure of a time with this series, managed to complete it in just two days that’s rare for me, haven’t done that in a long time. Yona Of The Dawn when it came out in 2014, I remember the great praise it was getting within the first five episodes airing. But back then I had a denial sense to check out new seasonal stuff.

This series was up my ally in terms of plot, fragile princess world turned upside down, guardians come to protect her. That is badass written all over in my opinion and that is what this series if I had to describe it in one word. The one who stole the spotlight most of this series was our main character Princess Yona.

I had seen images around of Yona going from this innocence princess to a girl who found her grounding. My first impressions of Yona at the beginning were a cliche, carefree princess not having to worry about a thing, off with the fairies. In the beginning I had no clue what this series would involve, when her father is murdered that is when I began to feel excited. The first five episodes are still fresh in my mindthe start of Yona’s painful journey she was about to embark on, the introduction to the story in those episodes was perfect. Which leads me to say referring back to our star Yona, the main thing that made me love this series a lot was her character growth. The last time I got excited over a characters growth that surprised me over and over was Shirayuki from Snow White With The Red Hair.

Both of these two are very similar in personality trait of being very strong willed, but Yona has topped over Shirayuki for me. The point I became memorised with Yona was when Hak her body guard, was about to fall from the cliff. Fire tribe general had Yona by the hair and that moment she woke up to herself, from their her growth as a person and a princess just grew as something to be captivated to watch at. I did like at the beginning seeing her vulnerableness, willingly knowing how weak, powerless she was then her performance as a whole was so convincing, believable which is what I love to feel from a characters growth. You become invested in the wrapping emotion, this is the reason Yona is up their in strong female leads.

Carrying the traumatic experience of watching her father be killed in front of her, her killer becoming the new king, sets in place Yona finding her grounding, becoming a stronger person, seeing others in her kingdom suffering. It’s exactly how in life we experience traumatic events and trying to pick yourself back up, takes a lot. Watching her character relays this sentiment back to it’s viewers and why I felt so enveloped in her character. She is a character to not love in my opinion, you see equal share in her vulnerableness in the beginning, her cliche princess traits are humorous and moments of looking terrifyingly determined.

While Yona’s character gave a stellar performance throughout the series, I cannot not talk about the other characters which supported Yona’s growth. Hak her childhood friend and body guard was Yona’s rock, that held her together at points in the series when at her darkest points. As much as I loved Yona, I loved Hak’s character equal to that, always made me laugh of when he teased Yona, treating her still princess like. He never sugar coated Yona, while caring for her at the same time he wasn’t going to baby her, as he wished for her to become stronger. I love the bond these two had in beginning, loved it even more till the end, their will’s to not let one another die was very touching. Hak wasn’t always her saviour in every tight spot they were in, Yona’s new found strength was able to shrine through. Hak is a very likeable character and I asked on twitter last week of where can I get one of these Hak’s? No answer yet. lol. 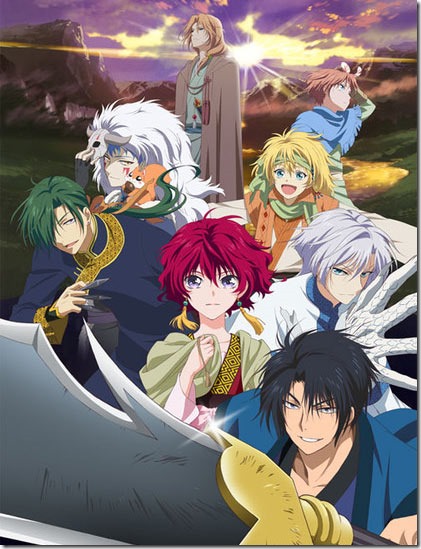 Along side loveable Hak and Yona the four dragon guardians, Kija, Jae-ha, Shin-ah and Zeno were just as entertaining. Though I did not realise that searching for them would take up 3/4 of the actual series, I was worried when I got onto the last four episodes. Still the last dragon Zeno hadn’t been introduced, others were assuring me it would happen. Though looking for the dragon guardians took up a huge portion of the show, there was some great character development going on. I liked learning the back story of each dragon guardian, seeing it was vital for the story. As I would have been more disappointed if there characters hadn’t been explored, so taking a 3/4 of the show was necessary. Why do I believe it was necessary?

The pacing of the introduction of the four dragons was good, enough time was given to get to know these character who play massive part in princess Yona’s journey. By episode 24 you feel this great anticipation of what is about to next but yet since 2014 there has been no season 2 announcement in sight. Desperately Yona needs it to see what she does next with her new party group, The whole season was not wasted on searching for the four dragons. Watching Yona’s individual connection with each guardian is heart warming excluding Kija, Jae-ha, Shin-ah had it the toughest as he was looked up as a curse. The dude doesn’t say much but you can tell he is such a gentle soul, Yona could see that. The saga involving finding Shin-ah was the most touching. I’ve been told Zeno’s backstory is told in the three OVA’s which I have yet to watch, I’m told it’s sad… considering he appeared out of nowhere, claiming to be a wanderer. I felt his characters back story would be sad.

I love the entire main cast of characters, I can’t forget supporting Yun. He was so level headed for this age, he kept everyone in check, like a mom in a way.

The only two negatives on the show I have is Suu- won’s character, he didn’t interest much at all. His fake persona he puts on, is quite irritating, selfish child who is trying to do what his father never got. If we ever got a second season I would hope this character is developed more, maybe then I might like him better. Second negative episodes 16 and 17 I felt were wasted on Suu – won’s visit to the earth tribe, I actually skipped those episodes. I don’t normally skip like that but was just boring.

While Yona Of The Dawn at points in the series things can become serious and tense, the mild relief comedy between the main cast of characters is funny. While this show is driven tragedy and how much a person’s mentality can take, while it pulled at me. I experienced no end of laughter, In the comedic scenes exampled above I love how boldly outlined the characters stand out with the funky coloured backgrounds, I just like how from those scenes there is this calm flow. I am a fan of Studio Pierrot work and by far is my favourite animation work they have done, every single episode the animation is clear, crisp. Scenes exampled above extra attention was given for touching moments like that, softened, bright tones make it look so beautiful.

The music for Yona is captivatingly beautiful. Whenever I write a review I like to listen to the original soundtrack, as it helps me focus. Just listening to it made me feel like I was in ancient China or Edo Japan, all the melodies create this image of that time period in your mind. My favourite piece so far is “Yona’s Theme” is a riveting instrumental to me it’s conveying the traumatic struggle of losing her father and vulnerableness, it’s sad yet calming to listen to. I will tell you something that surprised me was the two opening theme, the first anime I’ve ever seen with no singing just a instrumental playing. Then it’s flipped on itself with a upbeat, electric second opening sung by Cyntia , she has a very powerful voice that just suited to the beat of the song.

Been so long since I enjoyed a fantasy series like this, last one was tears to tiara from memory. But Yona of the dawn was better than that, I can say this show as a whole is amazing. How it handles deep character development and a enveloping plot through our main character Yona of what it takes to pick yourself back up, finding strength you never knew you had. Next to Shirayuki, Yona is a great strong female lead, even though her vulnerable sides show of how powerless and weak she feels deeply. Which is the reason you’ll end up loving her like the rest. Yona of the dawn is a series to have fun on the adventure Yona and her group trek on, by the end you’ll be craving that second season like me, along the way giving you laughter. Don’t worry their is plenty of action, fight scenes are entertaining in itself.

I hope you guys enjoyed my review on Yona Of The Dawn, that’s 2/5 so far, sorry it’s been a slow process to get through these shows but next up I’ll be watching is the long awaited Free !!

Please comment below any thoughts you have. Do you guys love this series? and why?

18 thoughts on “Dawn Kicks Ass – Yona Of The Dawn”