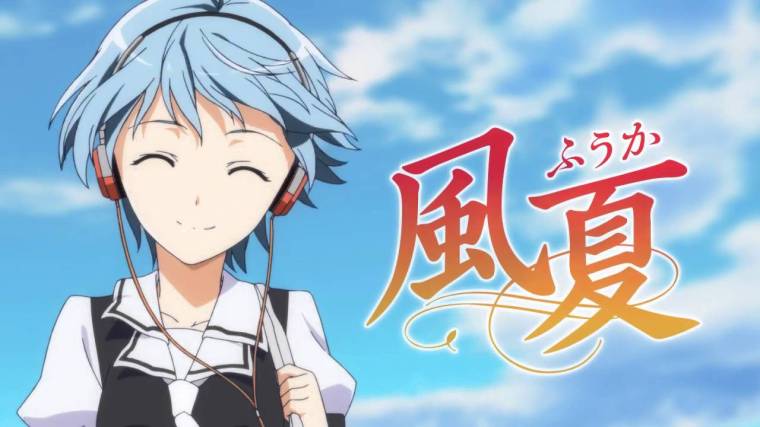 Winter season 2017 is in full swing and my first impressions are a little late but I said I wouldn’t be doing episodic reviews just first, mid and end impressions. The first series I ended up checking out was Fukka. This anime is a spin off to Suuzka which I am currently reading the manga of still. Yuu a introvert moves to Tokyo to live with his sisters where he meets Fuuka, she mistakes him of when they meet of taking pictures of her and begin to become aquatinted with one another.

Right off the bat I’ll say there is nothing special about this show so far, very cliche right off the bat. Yu and Fuuka’s boring meeting, of Fuuka assuming Yu took a picture of his panties, she overacts and then meet later again at the same school. I knew this series might be cliche but first three episodes are getting well over cliche. Yu main protagonist is a shy mess, reminds me of myself honestly of when I feel insecure, I’ll tweet about it. He is cute, shy personality I like about him but at times he is a complete dainty mess, he demonstrates too introvert. Which is a not bad thing, he represents to me a modern introvert of this day at age, where social media is bigger than ever, I remember anime back in 2000’s not being this way modernised just goes to show.

Fuuka as a character I don’t mind her, she has a spunky attitude but nothing that makes me feel much for her character so far. Maybe Fuuka will shine brighter as she progresses towards her new goal of making music. Fuuka and Yu together are as awkward as each other which is funny so if they ended up together, would seem fitting. Other characters of the show are forgettable at this point especially boy liker Makoto, see a character like him in so many shows. Animation wise rather average, the teaser pictures of Fuuka had me excited but some scenes in the first few episodes have soft tone look, which is nice. I like the opening theme song, can see that being added to my playlist but the scenes with the song are not memorable.

By getting to episode two, oh here comes the incoming love triangle. The contender Koyuki is boring as hell personality as well, the too innocent type for my liking. Honestly seems like this is going to be a boring love triangle outcome, if something can come along and spice it up that would be good. Even though this show is as cliche as it is, which is why people seem to be dropping it, I will continue to watch it. It’s cliche, laid back to me so I’ve found it relaxing while watching, quirks of Yu and Fuuka growing relationship keep me engaged somehow a little.

I’m fearing the music part of the plot will be lost if this love triangle will be centre stage, hoping both elements of the plot are balanced, so we get the both of best. But I am doubting at this point but none the less so far this show is not terrible, just typically too cliche for others. I’m used to the cliche concepts as what Fuuka has laid out for us, heres to hoping my mid impression something sparks up the show, right now it needs it honestly. I know this impression is rather short but nothing exciting has really happened, and not going to go into detail about everything. I feel I’ve covered everything I wanted too. I sound like I’m not enjoying the show, I don’t mind it just all the cliches let it down, but I plan to read the manga as I hear that is pretty good. If you want to read the manga you can read it on crunchyroll.

Mid impression of Fuuka I’ll do around between episodes 4 to 7 see if things can get better. My next impression is on Masamune – no Revenge episodes 1 – 3 which will be out this week sometime as well.