When it comes to the darker tones of anime, my interest lies a lot in Vampire more than psychological or horror series. My interest in vampire began with Buffy the Vampire Slayer from when I was 12 or 13 and when as I got into anime a lot more discovering there were vampire series in anime was very exciting. 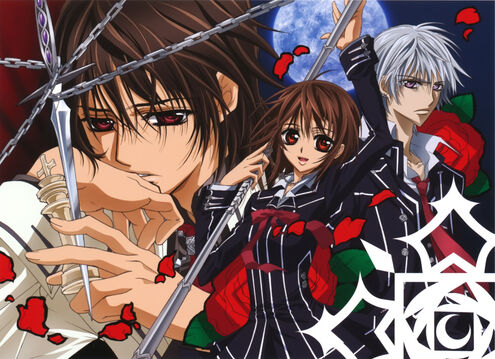 What show intrigued my interest in vampire anime, kind of sad to say as Vampire Knight . Back in the day and still even now this is popular series but way back the buzz for it was crazy. Remember attending my first convention, the amount of vampire knight cosplays was crazy, not enough Zero’s I ever saw, always Kaname and Yuki’s. It’s been a long time since I have revisited this series but I enjoyed this show back then. Though looking at it from a clearer perspective my standards have changed in what I want to see in vampire series. If I re-watched this series now guarantee I would be picking at every thing I could like a critic, for example only character that actually had personality was Zero in the whole cast. Regardless of what my standards I hold are now, this show is nostalgia for me and the reason I got into vampire anime series. But so how have my standards changed since then?

It all changed when I watched Hellsing for the first time. I’ve seen the original series but Hell sing ultimate I still have not seen the ending to that series, duly at the time to interruptions. Alucard blew me with how wonderfully, terrifying his whole character was and embodied everything of the traditional vampire, it’s what I had been waiting for. Both series of Hell sing will entertain any viewers who love vampires, gore and to me is in my top 5 favorite vampire series. Ever since from watching Hellsing other vampire anime shows none gave me that thrill of the classic vampire of the night. Other vampire series like Diabolik lovers is about hormonal sucking vamps than being traditional. Though to an extend I enjoyed (shamefully to say), it goes into my category of trash anime Lita loves. I love cute vampire series like Rosairo vampire, Karin, Jitsu wa Watashi wa but I always yearned for that dark side of vampire.

Last year when I watched Shiki which brought me back all those nostalgia feelings from watching Hell sing. You can read my review on it here  but Shiki sticks to the theme of classic vampire, it’s a roller coaster of death. The plot and suspenseful music were the shows hugest factors in creating a teeth – gritting atmosphere. One scene I cannot get out of my mind is the character Megumi, waiting outside the window for her victim, you can google the image and feel creeped out for the night. Shiki and Hell sing to me are the only shows I consider worthy of saying they stick the classic vampire traits. They portray the darkest creatures of evil, lusting after their own needs, filling their empty shell less selves. No other vampire shows have been able to live up to my expectations, just because I like the darker tones of when it comes to the vampire, doesn’t mean I have not liked other vampire series I’ve watched.

There are still vampire anime series I have yet to watch but as for the genre itself. I wish something new or fresh would come out, feel this genre needs it’s boost again. Currently airing in the summer season is Servamp which I’ll check out at some point but the plot hasn’t made me want to check it out sooner. I’m craving for a vampire anime series, course along the lines of Hell sing and Shiki, just showing these creatures at what they do best. I wouldn’t care if the plot was cliche just if it could set that suspense, make me attach myself to my pillow, I’ll be real excited. I blame up until this point Buffy vampire slayer for this dark interest, I am kind of tired seeing weak vampires and characters who become too easy prey to be well… preyed upon. I hope one day a new refreshing kind of vampire series comes out with everything I expect it to be then I’ll be doing a long blog post about it.

I hope you enjoyed this post and please comment below of any thoughts you have. Do you wish for this genre to have a boost? What kind of things would you like to see in a new vampire anime?

Hope your enjoying my September blogging every day month!!

I’ll see you all in the next post!! 😀
LitaKino