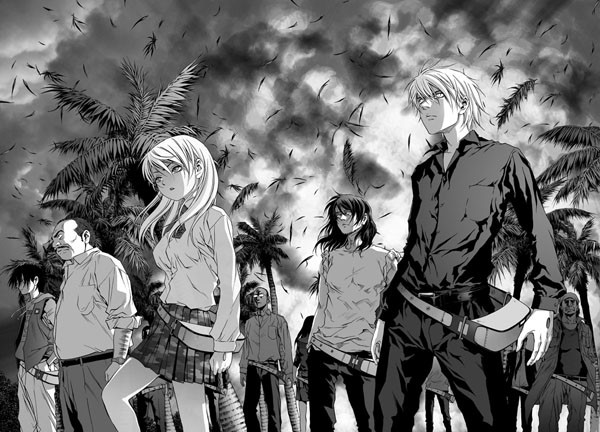 Sakamoto Ryouta unemployed, lives wit his mother is obsessed with playing an online combat game called Btooom. His life is changed when he wakes up on this mysterious island, he has no clue how he got there or where he is. After encountering someone he called out for help, trying to kill him, Sakamoto realizes everything was happens like in the Btoom game. Now he must survive this real life Btooom game and figure out how he ended up there.

If you follow me on twitter or instagram you may have seen a recent massive haul of books I borrowed from the library. I borrowed more than 50 books, one the first manga’s I decided to read was Btooom. My interest into this series was from watching a video by a fellow youtuber friend Anime Palooza .  I had never really read any action like manga before, as you know hooked on typical shoujo trash.

I decided to read the first three volumes and see if I wished to continue reading it or better yet collect it. As I write this right now, I wish I had all the volumes because after reading the first volume I was hooked. Volume one was a good introduction into setting the suspense of Sakamoto, winding up on this mysterious island. Sakamoto from playing Btooom game online he was one of the top players, honestly thought he would have gone crazy killing all the others stuck on the island like him. Surprised me of trying to avoid killing anyone and befriending some older guy who I don’t really care about much.

It was good to get a little backstory on all of the characters so far introduced into the story. Gives you insight into the type people that ended on this island, from my judgement so far, all having not great dealings with people and sad, harsh life’s. Course I eventually found out the reason for why these people were chosen, which it was quite depressing to find out. With death like plots in anime’s or manga’s, many characters that are introduced I know won’t stay round for long so with plot lines like this I don’t get attached to characters easily. Though this time around might be an exception for the main protagonist Sakamoto, as I really want to see him get back home. The girl has not convinced me enough to care about her character, saying this now I’ll probably regret it later but it’s early days.

The Gorey, gritty nature of this manga really caught me off guard as I was reading through the volumes. The insanely good art work creates that dark atmosphere, and the detail in everything, I’ve never seen such detailed work in a manga. The art work gives this manga the star factor, particularly the jungle backgrounds, man so good.

So far Btooom has impressed me, this series has given me deadman wonderland feels in a way, a death game. I read an article on Btooom from a writer them saying was the worst manga they had ever read. Saying the author exploiting the main girl character in graphic ways and just exploiting in inappropriate ways. The review point on that just made me laugh really as it just made me think of the second half of the Sword art online arc. If anyone knows what I’m talking about then writer of that review, it’s a manga dear, real life is worst to demonstrate that fact.

Btooom I give an official thumbs up from me and fully intend to collect this series now and hopefully give a full review on. It just makes me want to watch the anime now, even though over and over people have said they want it to have a second season. I’d probably join them on that rally knowing me.

I hope you enjoyed this first manga impression, been quite sometime since I have done one of these.
Please comment below if you have read this series or seen the anime for it.

I’ll see you all in the next post !! 😀
LitaKino