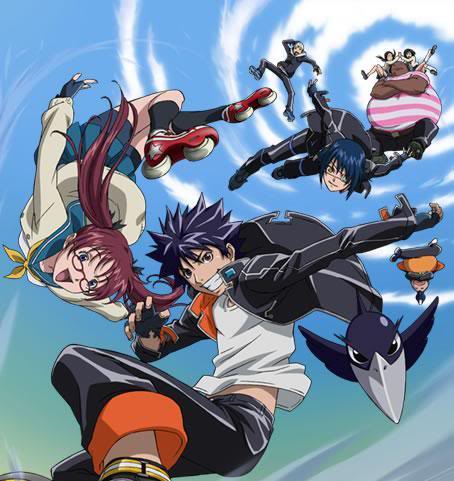 Time for me to cover some underrated, not talked about series out there. I’ll be covering various series you may have never heard of and give you a reason to check it out. To kick of my new review idea, I wanted to started off with a series that made me forget how much I love skating, Airgear.

Ikki is a little trouble maker, he soon delves into the world of “Air Treks” a aggressive, different side to skating. Teams compete in various events using their A-T blades , Ikki soon decides to create his own team with fellow friends Kazu, Onigiri and other allies they befriend. Ikki dreams of making it to the top along the way, learning some of his past and competing against the best skaters out there.

Air Gear, was a really fun series to get into in my early days of watching anime. I re-watched sometime last year and from the first time watching it, my feelings on the series have changed a little. My feelings haven’t changed for the worst but after watching anime for over 10 years now, my mind is much clearer to notice things you wouldn’t. But I am going to talk about one enjoyable factor I got out of this series was the strong bonds between Ikki’s Team. The whole series focus isn’t all about this sport of aggressive skating  but the primary factors of what makes a good team work together.

Ikki as a whole is a complete jerk most of the time but as a leader, he always encouraged everyone in his team and only wished for them to be the best they could be. Having friends Kazuma and Onirigi already on his team, when the two additions Buccha and Akito come along does Ikki’s team begin to feel solid. Akito I felt sorry for as primarily never having friends and just used a lot by others, Ikki didn’t hesitate to welcome Akito in his team. It was a little heart warming to watch that scene I remember and reminded Ikki does have a kind side somewhere in there.

There bonds as a team only grow stronger in the series of every battle or other team they face and Ikki’s team. I feel display just because there all rookies, doesn’t mean they’ll be shoved to the side so easily or give up.

To enjoy the full extend of this show, upbeat music was a key factor and it delivered right on the mark. The music to Air gear reflects the retro, suburban setting of the series and exciting and passionate feeling,the characters in the series, display through their love of skating. The high, electric music really makes you feel excited when skating teams battle one another and adds to the fun thrill.

So Air Gear’s main strong points are team bonds and the urban street music that give it it that retro edge. Adding onto this, there is a good sense of comedy throughout the series and humorous cast of characters. There were characters though that brought nothing to the series, for example Simca she was just a fan service element to drool over. New characters would be introduced half way through the series and you would barely get to know. Thank god for the main cast of characters like Ringo, Ikki, etc they make up for all of that with their funny, humorous personalities.

I’d be surprised if this series did not make you chuckle even a little because some of the uncanny, unrealistic things that happen. For example Ikki’s team member big Buccha during a skating battle he sucks in fat and shrinks his body size to skinny, so he is able to maneuver faster. A lot of scenes like that are over top and Air gear is a series like that goes a little over the top at times, but it’s done in a hilarious fashion.

I’ve read only two other reviews on Air Gear, have to say though the series gets overlooked a little because the writers mention of the fan service element. I’ll just clarify I think the fan service in the series is on a moderate level, nothing over the top that would ruin your enjoyment. It didn’t put me off watching this series, to be frank it added to the amusement and humor of the show.

From referring back to the beginning of the review of mentioning my feelings has changed a little after re-watching Air Gear. One downside of this series is the ending as it was not the best and did not conclude the series at all, I feel Air Gear needs a season two. I was left feeling, wanting more as the plot, I felt was rushed also. Everything was happening at a fast pace, for me if the series was a few episodes longer, would have made a huge difference. Now I can only pray someday it get’s a second season but the manga now will have to comfort me for a conclusive ending.

Air Gear, is a series you can just roll with and have fun with. It’s not a perfect show in some areas but god dam it so entertaining with the plot idea of futuristic skating. It’s a silly concept really, skates able to take you to the sky. But that is envisioned through the main protagonist Ikki brilliantly, your taken along for the ride. I was kept entertained and laughed endlessly, that is what mattered to me in the end, humor is a good strength for this series. I would recommend this series to anyone who is looking for something fun to watch and just needs a few laughs.

I hope you enjoyed my review on Air Gear,
I’ll admit after re-watching this series I got back into roller blading big time. Dam that Ikki.

Please leave any comments below!!
I hope to continue bringing you more rare, unknown shows for you to give a go!!

I’ll see you all in the next post!!
LitaKino

6 thoughts on “Fly To The Skies – Air Gear Review”