It’s been a long time since I did a anime review and it’s not a Sunday. Well that is for another important post for me to write up for next time but I’m back with a cracker of an anime I most recently just finished watching. I picked up this series a while back because it was rather cheap and was underrated I kept hearing about, haha indeed this series was my calling to watch. As Lita reviews the Insane, exciting Deadman Wonderland.

After a strange occurrence that swallowed up whole nearly 3/4 of Tokyo a survivor of all that Ganta who years later leads a fairly normal life but all of that is turned upside in a twist of fate. His entire class and mates are slaughtered by a mysterious cloaked man in red referred as the “Red man”, being the last one alive of the class the man in beds into his chest a red shard. If that wasn’t enough seeing all his class be slaughter authorities think Ganta is the one responsible through the court he is sent to hell hole prison of Deadman wonderland.  Now Ganta wishes to clear his name and find the redman who put him there, beneath the amusement land of Deadman wonderland lie many secrets and through it Ganta discovers he can control his blood as a weapon., He is about to live some real hell.

I have to start off by saying soon as I heard the opening theme for the first time, it was heavenly to listen to. I am totally in love with it all together, it is just perfect to give you a glimpse of interest as what the series is about. It’s how I felt when I  first watched the opening theme, going through my head was this show is not going to be pretty because I went in blindly watching this series, knew nothing about it. Cracking first impression with the opening themes the colors of red, grey and black clips clip gave that twisted essence that I could feel was going to happen in this anime. The ending theme really surprised me as it’s nothing like opening theme it’s very cutesy almost, none the less I liked listening to that also. I felt it stirred away from that twisted vibe from the opening theme and shows clips of Ganta’s friends who were well alive but the ending theme shows a softer feel to the series.

Animation for Deadman wonderland was good in my opinion especially when it came to all the action scenes, beautiful contrast of color for the parts when the deadman would fight with their blood gorgeous, scarlet red. 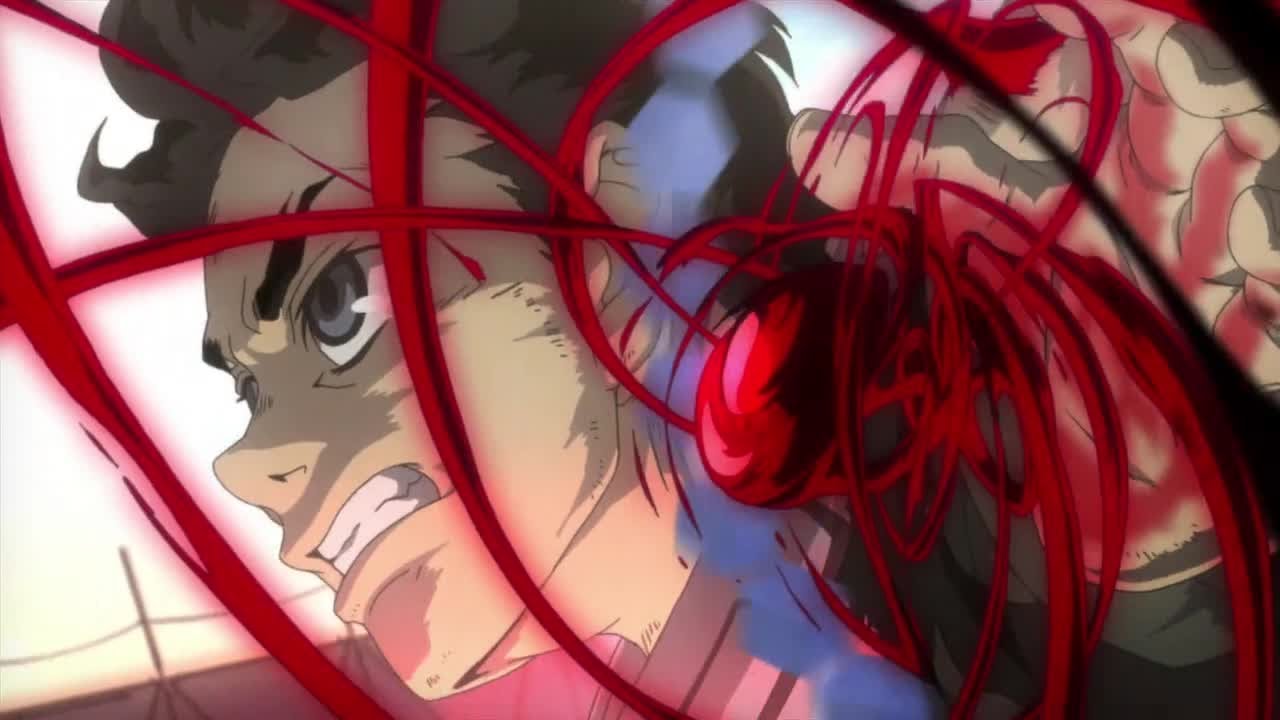 The insanity !!! Deadman wonderland certainly takes the cake for the theme of insanity. I went into watching this show blindly, knew nothing about it which sometimes can be the worst or best thing so what was the verdict? ….BEST !!! Don’t regret nothing episode one was a brilliant introduction to the plot, everything was set in motion well so was very easy to follow from there. If I had read about the plot soon before going in blindly would have been more inclined to watch this show sooner because to me I believe it is a plot that can pull any anime fan in. The idea of this amusement parkland/prison where all the inmates are put through the ringer in all this death row contests and having to eat this foul candy every three days just so you don’t have poison ejected into you. Such interesting little things that add to to the ever so turning plot, I loved it in honesty. A passing thought occurred if any of it happened in real life people attending these death row contests, inmates sent to the slaughter that thought kind of makes you feel sick, watching in the anime was enough for me.

I am a girl who can take gore, blood series like Hellsing but Deadman wonderland had me stumped to all the carnage and struck a very emotional cord with me. That emotion came from the male protagonist Ganta as he is a framed culprit of his classes massacre and thrown into a prison of true hell. Ganta’s character was as I predicted a little weak and bit of cry baby, I feel I can tell that just by looking at his character but this little shrub grew some balls. His character surprised me a few times just made me want to root for him, through Ganta’s character shown it’s okay to be weak, it’s something many of us can’t accept about ourselves but we shouldn’t stand down so easily. Those qualities about his character just reminds you of how we have been put in that weak corner before you even start to say his character is useless, which it is not for this series.

Plenty of interesting, insane characters that was a big strong point for the show all with their on agenda while in the hell hole of Deadman wonderland first we have directors son Tamaki. Who is a man of pleasure and pain, he has his eye on Ganta most of time wondering what miracle he can bring as he is first of many who framed him. Tamaki likes his poetic riddles which in other words mean death is involved, his character makes me wish he was never my boss scary…. The most puzzling character for me of the series would be Shiro as you only learn a little back story and her connection with Ganta. Monica Rial who voices Shiro in the english dub I thought was a great combination as her character is child like and selfish, it was funny to hear all the time so thumbs up for that voice actor choice. Her character just seemed liked it was just there none irrelevant but half way into the series I felt I began to see Shiro’s role but yet still her character is a mysterious.

Pinpointing who was the most insane in all of wonderland well in my opinion was one of the side characters Minatsuki. Starts out as this innocent girl who loves Prim roses then the mask was unveiled when she had to fight Ganta in a particular scene, Oh boy makes me not want to cross her. In a way I admire her guts but not the part when she mentions she’s already lost a kidney or part of a stomach and just laughs, she was an interesting mix of things. Now I haven’t talked about my favorite character of this series which vastly became my new obsession now Senji aka Crow I love everything about this man, normally I don’t fall for characters like him but he had me sweeped up from first entering the scene. Senji is a man who lives to fight worthy opponents in the hell hole of deadman wonderland, almost try and enjoy his time in there, to me in a way he seemed like a brother role model for Ganta. Not saying Senji would probably agree to that but recollecting the scene where Ganta just wants to become that bit stronger, training him was kind of like a brother moment. Remember hardly anytime for sentimental stuff to go on accept when it comes to Ganta’s character because somebody has got to care, you think the other inmates would.

I don’t think I could recommend enough for people to check out this series while I feel the characters whole heartily make the series what it is, some minor flaws I noticed though. Firstly I wished the series hadn’t been 12 episodes, everything was kind of cramped in there and not enough time to really develop the plot. The series should have been 25 episodes would be more methodical for the plot of Ganta getting out of Deadman wonderland, clearing his name but sadly the plot has some deep holes in it. Another thing was how it ended, nothing went nowhere no conclusion really annoyed me and just craving for a second season to happen one day, because Deadman wonderland needs it. This has made me for the first time want to read the manga and see where that goes because usually when this happens with short anime series with huge plots, reading the manga for a conclusion ending is the next best thing.

Even with the flaw of a not so conclusive ending the show is still so thoroughly entertaining and I was at the edge of my seat every episode, action is nothing of short as well as your blood shed. With the main characters you got to know some of their backstory which I was glad to see but again development would have been preferred. Cleverly done showing each inmates story into how they ended up in Deadman wonderland so I could see every character individually which doesn’t happen a lot in short anime’s so another thumbs up for you Deadman wonderland.  Keep in mind people that gore, blood, heavy language this is not a light weight, I’m sure people realize that but I am reminding you to watch at your own risk if you under age.

Deadman wonderland has all the action for you but the biggest weak point being the plot not being developed more. None the less I enjoyed this series greatly and hoping, praying for a second season because it desperately needs it, If you decide to watch it I recommend watching it in the english dub thought it was fantastic the voices for all the main characters especially Ganta’s voice who is played by Greg Ayres who I know him well for Kazama from Full metal panic. Greg knows how to bring the geekyness in innocent male characters and does a splendid job with Ganta. Deadman wonderland is a show you have to give a try, you’ll love it or not but Lita gives this show a two thumbs up from where I am 😀

I’ll see you all in the next post !! 😀
LitaKino