A while ago I deleted my top ten female anime character’s list as with mentioning with some posts I wasn’t happy with this post was one of them. After much rethinking I finally had decided on my list and decided to make a video of them as well give some deeper thoughts into why I love these female characters so much. In the video (which you are welcome to watch) I really only scraped the surface about why I love them so feel free to continue reading as I discuss into more detail of my top females.

You will find on my blog any top list I make means a great deal to me, people can question my list of choices but at the end of the day I don’t care my choice, my opinion. My list has changed a little from the previous one but I feel fully settled on my choices and when I do my top ten male characters I will make sure I am happy with it instead of having to redo anything.

Angelic layer was the first anime I ever watched and I didn’t know Misaka would end up in my top ten list. She’s the only child in my list but it was her maturity that hit a soft spot for me in loving her character. Misaka is way more mature than Serena from Sailor Moon *cough*  for being 12 years old she takes a lot on, trying to be strong when some obstacles come her way. She easily made it so fun to watch this anime and her hyper, infectious personality really stood out for me. I can still picture myself cheering on Misaka and her battle doll Hikaru every battle they were about to face. I do wish with her character though she had a different hair cut because I initially thought she was a boy which it kind of does Am I wrong? Others may find Misaka character’s annoying a little but she won a spot in my top list for all the right reasons.

I adore this comedy anime and where another character I easily began to admire in the first few episodes. Ryoko made it into my list because she is a character I looked up to and reminding of how I wish I was a little bit more confident. She had plently of that Confidence and SPUNK !!! I am a very fond of anime characters having a little bit of spunk and Ryoko had an endless supply of that. When I say spunk it’s from those freaking adorable cat boxing gloves (I WANT A PAIR OF) to how she dresses. I feel she was the most developed character in the series and felt you got to really know her as a character/background. Short anime’s up to 13 episodes it’s hard to squeeze that character development but Ryoko’s character was developed well and easily for me to get attached to. Beneath her toughness facade, she has this really sweet side and the thing I love most about her is she doesn’t put with stupid boys, I know who to call if the stupid boys come my way LOL.

8. Sawako Kuronuma (From Me To You) 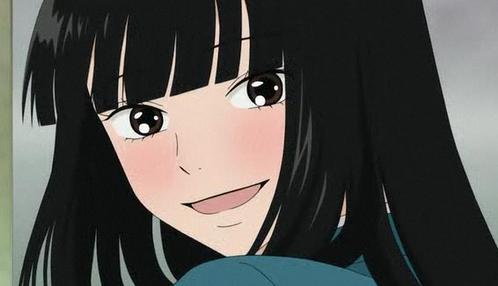 Precious Sawako made it into my top ten list as she took me back to my childhood or my teen years of how herself went through the difficult hardships of being misunderstood and trying to make friends. The experience I got from watching her just flowed back all those same feels I went through myself and many others out there have, by the end of he series she became a deep character I was emotionally attached to. On screen she was one of the most enjoyable characters to grow as a character and getting to experience new things, just makes you go AWWWW !! pretty much <3. Her reactions and expressive faces towards different situations were so adorable and hilarious at the same time, no end of times did she fail to make me have a chuckle. If you ever get the chance so go watch FROM ME TO YOU !!! you won’t be disappointed !!!

Haha surprised?? It was a surprise to me but I could not deny that Shirayuki made it into my top 10 from the beloved series Akagami no Shirayukihime which has just finished airing from the Summer 2015 season. I have never fallen in love with a character this fast as I did with Shirayuki before. A lot people love Shirayuki because to everyone’s surprise she is a girl that can stand on her own two feet, indeed there are a lot of female characters like her out there but Shirayuki was the Shoujo fantasy wonder. Like many I was surprised by her in the very first episode but there was the desired urge just to get to know her more, slowly but surely she made it here. What I loved most about Shirayuki’s character beside being a strong heroine and not needing a prince to save her, was the way she looked at the world and not wanting to waste any opportunity. I myself never like wasting an opportunity and to see this through her character was really refreshing, it’s the way she thinks and takes on things which why she made it into my top list. ❤

Kaname has given me many laughs for how many times I re-watched Full metal panic and it never gets old. Again Kaname is a character I wish I could be more like Confident and Independent. Kaname’s Independence was one of the first things I noticed about her in the anime and reminded me of how us women can be Independence ourselves, this was represented through her character well. Every time I look at a image of her reminds me of how much I want blue and it’s the color I want but never sure if that would happen lol. It’s characters like Kaname, strong, confident and Independence that we wish we could be like over selves.

Sora is my other half when it comes to my crazy, goofy half of me (which you all have seen). Her infectious, goofy character attracted within seconds and she always makes me smile when I re-watch this anime. She is so much like me loving to make people smile and being goofy in general, the energy she gives off while your watching Kaleido Star makes it much more enjoyable. Others may think she is annoying and cries a lot me well I do too !!! When she cries whatever has happened just shows how much it meant to her, I have to admit at times in the anime she can be whiny and too stubborn but that doesn’t stop her taking a spot in my top ten list. Again if you ever get the chance go watch Kaleido Star will cure any blues and such a happy anime 🙂

My love from Mei’s character was re-flamed after re-watching this anime and like Sawako she took me back to my childhood/teens but with Mei it’s a little differently. Like Mei I had a lot of dark moods where I would just think I needed no friends and I was the bullies next victim, Mei’s strong attitude towards all that negativity really made me fall in love with her character. Mei makes me wish I had that strength back then and watching her crawl out of her hole, experiencing new things was enjoyable to watch. She is a great representation in this anime of how we all put ourselves in that dark pit and takes that one person to show us a big wider world out there, I never had that sadly for me. Mei is not your average typical female victim, her journey of growing in the anime is beautiful and I recommend watching this anime before other’s judge. Mei has a special place in my heart and deserves to be in my top 10. 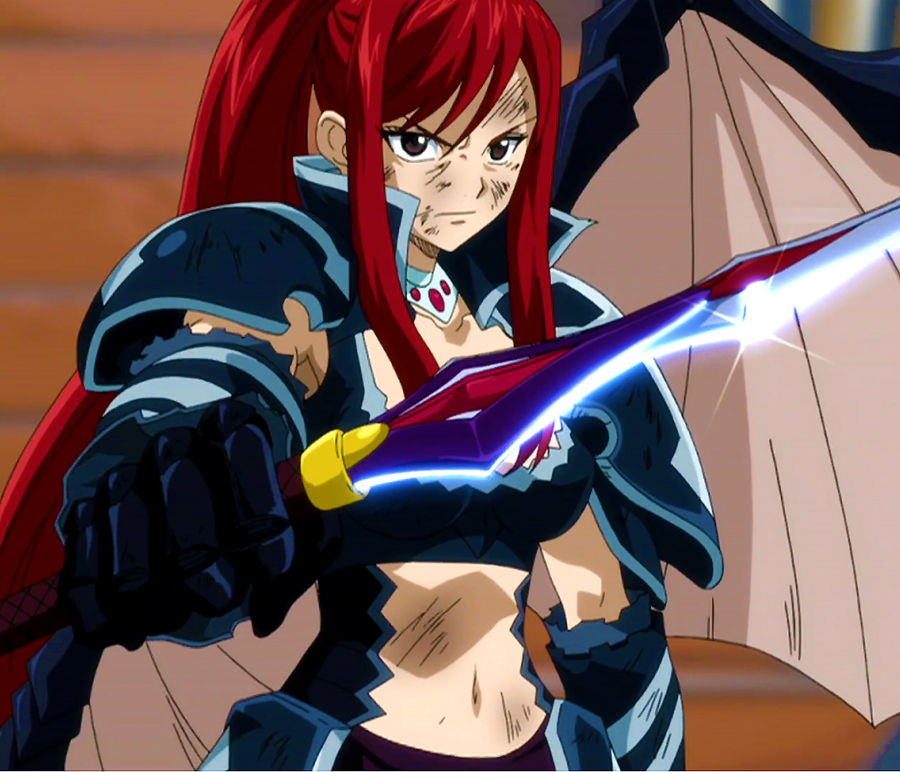 Who doesn’t love this girl badass, has the amazing power to change armor what’s not to love. I have loved Erza right from the beginning and still continue to love her unconditionally we will never part….<3 The main reason I fell in love with Erza was her pure righteousness attitude and certain quotes she said’s through the anime of Fairy tail like this one “When life changes to be harder, Change yourself to be stronger”. Heh it’s really hard to not love her and it’s plain and simple why she is my top ten peeps. 😀

Yumemi is a character I know many would have never heard of from a unknown anime called Munto I have loved for the last five years now. Yumemi is another character I related to a lot in terms of never believing in yourself, through the anime she had this constant battle. It wasn’t till the end of the anime that she said’s one certain quote “My heart is safely with me” this cute little quote meant she fully believes in herself and her abilities and after re-watching two more times I was hooked on her character. Yumemi I never ended up loving in the beginning I felt she was bland but funnily enough she got my number two spot as I just love her so much as a character. Her belief in self is what I wish I had even still now and she is super sweet and angelic ❤

Number 1 this won’t be a surprise people! 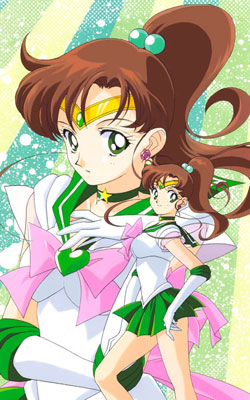 It’s hard not to notice hey…. lol I have loved her since I was 11 or maybe before that it’s hard to remember. She is indeed my number one from the episode “Jupiter Comes Thundering in” she captivated me. Ever since then she has been my babe not my Waifu (I’m not into that )but my babe her cooking made me only dream of being able to make something edible someday. It was fate and a bonus her elemental power was thunder and lightning as a child I loved to watch storms from my window so if I ever could have a power it would be that, so I am pretty obsessed with her anything Sailor Jupiter I like to collect it now. She is just so awesome especially when it comes to fighting, indeed the strongest out of the scouts all together in my personal opinion.

I feel pretty good now after writing this post, glad I redid I feel happy with it all before I just didn’t like how previously I had wrote it all. Feel free to watch my video above and follow me on my Youtube  where I would say I am crazier than even here but you know me 🙂