“I am the Ultimate Queen Of Vanity”

Hello everybody!!
Welcome to another yet late Sunday Review Time With Me Lita, I really have to get these reviews on time but like always I had life delays which got in my way *shakes fist*. We are going back a few years to the year 1998 for this review this week, recently I picked up this old favorite from watching it ages ago it’s one of my favorite romances comedies as Lita reviews the heartwarming, crazy His and Her Circumstances.

Highschool freshman Yukino Miyazawa is the perfect model student, number one in all her studies, amazing athlete and so kind to others, She’s perfect almost.. where really she puts on the greatest act, a complete fake, Yukino has thrived off praise and admiration since she was young and has built up over the years this twisted fake Yukino who people love and adore. Yet they have no idea the real her never really cares about anyone and always wanting to be number one in everything she does, she has the perfect life or she thinks? There is one person however she cannot stand which is someone next in her league where she has been knocked off top by Arima Soichiro, Yukino sees him as a threat as he may take away all the praise she always desires. At one point Arima confesses his feelings to Yukino of course she rejects him blindly and expect him to bow down to her after that which he does not. Yukino can’t read what Arima is up to or thinking until one day it’s all over as Arima comes over to her house to loan her a CD and Yukino answers the door…..as The Real Yukino. She feels it’s all over then but Yukino has no idea that her life was about to change and what was Arima going to bring to that?

Animation plays a huge role in this series as it is all over the place as many different medias and techniques were used. As I have read up so far there was a lot of disagreement between the two studios working on this project hence why the animation is mish mash. But we have to think this is from 1998 anime wasn’t perfect back then so I don’t think should be stabbed in the dark so easily, So while watching this anime you are going to get from paper cut outs to comic style, I have to admit while re watching this anime seeing all that mish mash of animation did annoy me like it did for the first time but the way I think about it now I don’t mind it but still annoys me, it would have been better to stick how it was from the start. I did read somewhere that Gainax ran out of money while making this anime why is why we see paper cut outs but far as I aware it’s due to a disagreement between the two studios.

On a positive note there is a lot of expressive faces in this anime and the animation style delivers highly on that regard where there are certain scenes like Yukino wanting to kill Tsubasa:

Oh my god this scene!!

So when it comes to the character side of things regarding the animation I thought it was really well done and I didn’t mind the character designs at all, even though at some points there faces of bodies can seem out of whack. The opening/ending theme really is nothing special, it’s very boring so not worth talking about that sorry to say.

I am always going to remember this show for it’s beautiful representation of two main themes of being your true self and genuineness, Why may you ask these two things? The connection between Arima and Yukino you

can’t even question as they are both so similar on putting up masks in front of everyone, Both for their own reasons play the fake ‘perfect’ facade discovering together they are more similar than they think. I loved watching them as people and their relationship grow throughout the anime discovering themselves more and more, it just made me think about how we all are trying to find and accept ourselves which is really hard. These pair go through trial and error which leads me to say that this is one of the “most genuine shojo romances I have ever seen”. I say this because usually the typical shojo story we usually get is not how it would go in life but His and Her Circumstances is the diamond in the rough. Most of what happens to Yukino and Arima as a couple together is what some scenarios in real life may accur so this is why I feel the show is so genuine, that there is no crazy misunderstandings and beating around the bush as you get in your typical Shojo show.. It for me this show really focuses from a real life aspect point of view and is one of the things I noticed when I begun watching this show…God I hope I am making sense ahaha. Yukino and Arima are of course not perfect people which when they reveal to each other what they are really like pretty much the cannons have gone off. I forget the amount of times Yukino’s character made me laugh so hard, I think it was the lengths she would go to get praise from everyone that just sent me over the tipping ship, Her character is very easy to get attached to and became an easy favorite for this series. She so reminds me of Kaname Chidori a lot from Full Metal Panic on the parts where she would get mad, Yep. at the same crazy level there I would say. For me Yukino’s character was one of the most entertaining for this series, she struck a cord in me when it came to relationship insecurities that was refreshing to watch in Yukino’s character. But I warn you all she can be very scary at certain parts in the anime but she acts like any girl would when it comes to relationship insecurities.

Arima’s character comes with a heavy baggage of painful past and imbalance of who he is really as a person. I feel he struggled the most until the end to realize who he was and not be afraid of what self was inside him, that is what always scared Arima but Yukino came flying in as this breathe of fresh air. So for both Yukino and Arima they both learned things they never knew about each other and both as couple I personally think they suit each well as more of their personalities are shown through.

One thing I really loved about this show was the array and different characters that were introduced, all characters got equal screen time so it got you to actually get to know of what they were like. Asaba was one character stood out for me he brought some of the comedic parts to the anime and yes could class him as your average pervert but Arima, Yukino and him all together they meshed well together. I could go into heaps of detail about all the characters but this review could turn out to be over 5000 words I kid not.

The series never left me feeling bored even with all the heavy drama stuff going on all the comedy aspect done through the show was brilliant. There would always be something to break up all the seriousness personally most of the comedy for me came from Yukino and Asaba as they did like to stir the pot a lot especially with Arima. It was always funny when Arima got mad and the scenes were pretty hilarious, The facial expression animation I may have spoke about above really are important to me in this anime. I don’t think I’ve seen an anime like this with so much expression all the character’s give off in the series. It’s wonderful really because the character’s personality really get to stand out which in the animation of today you don’t see a lot of out of proporation expressions as much which is kind of sad. But I can promise you this anime delivers on comedy aspect very well.

Do you know someone who is like this putting on a facade to be admired?

Yay I do have to mention some things I didn’t like about the show was first in between every episode was two of the female voice actors for the show always went through a synopsis of what’s to come in the next episode. Let me tell you It really just getting annoying after a while and I hated it, Secondly I don’t think I’ve seen a show do so many recaps on what has happened in the series so far OH MY GOD!!! When you got half way through the anime you would have to be recapped on what has happened which is pointless DON’T DO RECAPS !!! Lastly this anime for me could have ended better and the last few episodes really do suck, you get bored because they have nothing to do with the current story of what is going on.

That’s all I have to say about the things I didn’t like about the show, I wouldn’t sit here and right about how amazing all round was because then we couldn’t call this a honest review >.> 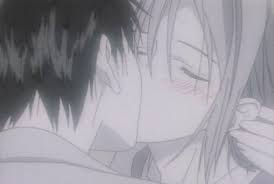 Ah this anime really did pull on my heart strings when it came to the really sweet moments between Arima and Yukino. Beautifully presented through these two of the perils of what love can throw at you and what it means for someone to accept you for who you truly are ❤

Don’t let the old animation style or of how old this anime His and Her Circumstances is put you off because this show does have a lot to offer. It delivers amazingly on the aspects of romance/comedy while being one of most genuine realistic shows about ourselves as people and real life love. It is one of those great old classics that you just have to check out I would highly recommend for any anime fan not just shojo fans, great thing about this show I feel it will cater to all even ones who don’t like this genre.

I really really liked the dubbed version as I was brainwashed on it haha, The dub voice for Yukino is perfect in terms of her character and personality, the amazing Veronica Taylor who may be known for the voice of Ash from Pokemon did a splendid job on bringing Yukino’s character to life. I feel the whole dubcast for this anime was chosen well for all of the characters but if you don’t agree please comment below I would love to discuss it 🙂

I’ll see you this Sunday again for another ReviewLitaTime!!
See you in the next post
LitaKino