This has been me since a childhood came back to me

This post is half and half personal and a first impression, I had not seen any posts about this show on wordpress and I was like “WHAT!!”. I am your crazy average dragonball z fan so maybe it is just a big deal to me, been 18 years since anyone a fan of the show has seen this anime.

So I considered it a pretty big deal, Dragonball z I would get up for at 6am before I had to go to school most of my mornings. This show warped my brain and made me start fantasizes of anime men: 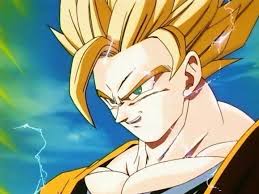 Look at those bisceps look at them *cough*

I thankyou for bringing some excitement to my boring childhood which it was >.>

I am not ashamed to say I loved becoming obsessed with this show it brought excitement to my school mornings, something to think about through the dreaded times at school I had. When it was announced two months ago by Toei Animation “Oh by the way a new dragonball series will be out” ……WHAT!!!. The hype was huge and went viral before you could say monkey lol. There were many mixed emotions as people debating was a good idea to bring it back or a bad idea? Personally I thought it was exciting and was so anxious to see what new possibilities would come into this anime.

I was so happy this week to finally sit down and watch the first episode, I was so excited and knew I wouldn’t be left disappointed. It was such a joy to see all our favorite characters again in action and you felt ready for the dragonball ride all over again. The episode was very laid back as I expected, dragonball is I feel a great anime for some of it’s laid, funny episodes, It was a great way to introduce this new series.

As much as I had enjoyed seeing the start of this new reborn series…..to my discovery I will never get use to Goku’s japanese voice “HE SOUNDS LIKE A KID” !!!. Same goes for Gohan’s voice everyone else’s voice never bothered me just those two and tolerating it as this series take’s off is going to be hard. I have seen some bloggers say they won’t watch this series until the dub comes out which I can’t say I blame them, Yep Sean Schemmel will always be our Goku. I don’t mean to complain about it but just annoys me a lot but I am going to see this show through to the bitter end, even with those kiddish voices. It does make me worried about about how Vegeta and Piccolo’s voices sound in japanese please let it be half decent…..

One part I loved about this episode was when Goten and Trunks went off in search of a wedding present for Gohan and Videl. They end up hearing about this amazing spa the water is suppose to make your face feel glowing, I don’t think they ever found it instead Videl got a regular flask of water. Seeing the boy’s puppy eyes she pretends to go along with it and say the water worked wonders on her face which was really sweet. The first episode contained the same charm as it once brought us all those years ago which I was having major childhood feels all over.

All I have to say is I am so dam happy this show came back and have vowed from here on in to review each dragonball super episode as it comes out. Lita doesn’t do episode reviews so why for this show? Because I grew up with this show and I would feel bad not to review it so it will be the only show I review episode by episode this summer season 2015.

If you guys want to know more of my deeper thoughts on this show check out my latest video on the subject:

Comment below if you excited about the new dragonball show or your not or your just a major fan like me?
😀

Let’s all get our dragonball on !!!

I’ll see you all in the next post
LitaKino