“Let’s Live Everyone To Become Happy”

Oh god no….another magical girl anime…..and it’s Shoujo
Let me stop you right there before you think of clicking off this screen, sure on wikipedia it’s say under the genre magical girl but there is much more to this anime. That is why it’s one of my favorite rewatchable series ever as Lita reviews the everso magical, drama Pretear.

This enchanting anime revolves around 16 year old Himeno Awayuki, Her father a former romance novelist has just remarried to the richly Natsue along with her two daughters Mawata and Mayune. Himeno is trying to adjust to her new family life but things in the beginning were never easy for her. For a while she felt like she didn’t belong and felt it didn’t meant if she was around or not, but an unexpected chance comes into her life. Himeno meets the Leafe knights among them Hayate whom she encounters beforehand as she mistakes him for a pervert, she was about to whack Hayate but suddenly is pushed back by a powerful light.

The Leafa knights ask Himeno if she has seen red snow falling and when she said’s she has they tell her she is the Pretear they have been searching for. Himeno at first is reluctant to help the Leafe knights thinking they are just going to use her but she soon changes her mind and helps the Leafe knights in their battle against their enemy the princess of disaster. As she is trying to suck all the Leafe out of the world, Leafe in the anime is the meaning of the word life.

Pretear was released in 2001 so some people may judge the animation style because it’s old. I love the animation everything is really bold and clear, especially when it comes to the characters outlining. The bright, bold colors in this anime really stand out and since it’s suppose to be a magical girl series, It’s got to be BIG AND BRIGHT !! .

The music in this anime is just beautiful and angelic, I have always loved the opening theme “White Destiny” sung by Yoko Ishisa. I am a fan of Yoko Ishisa one of my favorite songs by her was “Natsuiro no Kakera” the ending theme to this ugly yet beautiful world. Whenever I hear the song “White Song” it just makes me feel so happy and makes me think about why I love this anime so much. I do like the ending theme song “Lucky Star”  too which is sung by Sayuri Yoshida, interesting fact she is actually is the voice for Himeno in the japanese version of Pretear.

( I didn’t know this until I was doing research for this review either >.<)

For only a 13 episode anime their is so much that goes on and I was not expecting that when I first watched this anime. Pretear was one of the first animes I ever watch so it holds a special place in my heart <3. One of the reasons this anime has been so special to me over the years was for all the relationships between all the characters. Relationships, friendship and love triangles play a huge role in this anime and I felt straightly connected to that, The message of these three genres are spoken so brilliantly and clearly it not that hard to miss.

I couldn’t resist using this image of these two it’s from when they both first meet and boy it’s funny. One main relationship in this anime that is just super adorable not to ignore is Himeno and Hayate. At first these two do not get along when they first encounter but as the anime goes on they begin to have feelings for one another. Hayate in the beginning could never accept Himeno as the pretear, I remember in episode 2 or three he makes her go through these dumb tests just so he can accept her:

Haha this scene is hilarious, Hayate makes her her see how long she can hold out by not eating all the sweets. 😛

I never shipped these two in the beginning because these two are opposites, Hayate is a arrogant, bit full of himself kinda guy and Himeno is a headstrong, straight rush in kinda girl. One thing I have to say they have in common is they are both really very caring people and never like to give up.

Himeno and Hayate I think make a great pairing even though I never thought that in the beginning, beside that I don’t know how they cannot make you laugh because they certainly made me laugh. Plus they have so many adorable scenes together here is a few sneak peaks: Love and family is a big take in Pretear when Himeno is trying to fit into her new rich life but it was never easy in the beginning for her. Her new mother Natsue very proper and full of pride, Her stepsisters trickster Mayune and closed hearted Mawata. 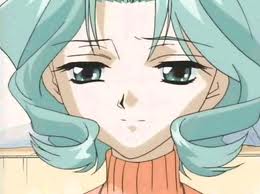 Himeno’s Father
(Himeno and Her father’s relationship is hilarious)

Natsue is quite funny as one minute you will see her all series then she will be all lovey dovey with Himeno’s dad. Mayune doesn’t really change always playing tricks and setting traps for Himeno. Mawato plays a big role towards the end of the anime as she has some unspoken feelings to speak out. A heart string pulled on me for Mawata as in the anime she is seen as a girl that is never understood. Of course in the end they do become one big happy family but to getting to that point was very enjoyable watch through the anime.

So one question is probably on readers minds what exactly is Himeno’s power in the anime?
She is known as the pretear but what actually does the pretear do?
Well it involves these guys when I mentioned them earlier: 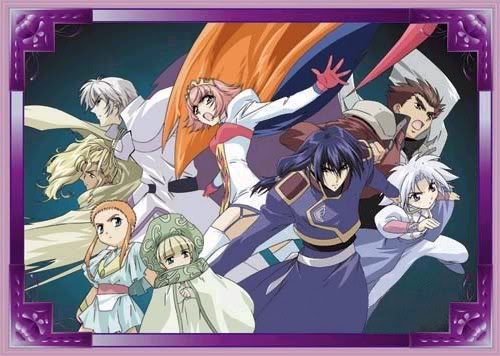 So as the pretear Himeno has the ability to merge with any knight, she claims their power and they become one. As a first timer anime watcher back when I was 16 I was not sure how to take this but of course now I think the idea is awesome. I absolutely love the tranformation scenes the music, AHHH EVERYTHING ABOUT IS JUST AWESOME!!! ❤

All her forms are just amazing and I want to cosplay them all but my favorite form would have to be Pretear of the wind and no because it’s… Hayate. Me and this form would bond so well together Blue amigos lol
*HINT* she does get her own power eventually *HINT*

I will prewarn people this anime will pull at your heart strings, I can’t tell you how no end of times I have cried at many scenes especially in the last few episodes 11 – 13. Pretear really does explore all the emotions of love, pain, loneliness, depression and happniess, the way these themes were protrayed throughout the whole anime is just amazing I think. One of the major characters that brings the themes of pain and depression is the Princess of Diaster the Leafa knights enemy.

These are her icky creations Demon Larvae
(creepy creations if you ask me >.<)

The princess of Disaster at first I hated her a lot in the beginning but as you get about half way through the anime things begin to unfold. Her character is centered the one full of sadness and pain, she wants to suck all the Leafe in the world and turn everything into darkness. Personally from having watched the anime she is just running away from her problems but can’t say I blame her. If you watch the anime you will find out the twist and her history with the Leafe knights.

It is very interesting Lita Promises 🙂

You have no idea how much I adore Himeno as a main Heroine and (I’m sorry other characters) she is my favorite character from this anime. I loved Himeno right off the bat from episode one, strongly I felt connected to her seeing parts of her personality I saw in me. Himeno is a character I look up to very much she is not like the other magical girl characters out there like Sailor moon or Sakura Cardcaptors. She is a independent character all on her own plus she has own knights in shining armor.

Pretear will be a series you will watch over and over again if you are a huge fan of magical girl anything. Pretear is a series that stands on it’s own two feet for it it’s handsome knights, Relationships and love triangles, magic and contagious comedy. If you love all these things then this anime is for you ❤

One interesting fact did you know this show was inspired from snow white and the seven dwarfs
but a twist was put on this series as the main Heroine would not be this damsel in distress.Instead would be the main shining character in the anime. For the record I would not class Pretear as a harem at all, sure their are pretty boys as knights but it’s plan as day Himeno was going to fall one of them. She’s not this character that harbord feelings for all of them, three of the knights are CHILDREN !!!

I recommend watching this anime in English dub done by funimation. Both the Japanese and english are good but when I first watch Pretear it was in the english dub. Here is a link to the anime below:

Comment below if you have seen this anime or your thoughts on my review
❤ I hope you enjoyed my review on some magical girl and I’ll see you next time readers !