Mecha mixed with comedy this anime really does bring that as I review the Hilarious Full Metal Panic! I am going to reviewing all three seasons of this series Fumofuu and Second Raid as each series I feel is very individual on their own. This anime is one of the first anime’s I ever watched and means a lot to me still to this day, It was one of the craziest anime I have ever watched and will leave you with laughs all along the way 😀

Meet Sargent Sousuke Sagara a 17 year old military member for a anti terrorist group known as Mithril. Sousuke is sent on a mission by his commander to guard a young japanese girl Kaname Chidori. She is being targeted by a unknown organisation who wishes to do medical experiments on her, Therefore Sousuke is enrolled into Miss Chidori’s school and with some support from his fellow team members Mao and Kurz. Sousuke has no concept of regular life as he grew up in the military and sadly his classmates find out he is some kind of military manaic including Kaname. So any situation that Sousuke ends up facing he uses military needs 24/7 and causes a whole heap of problems.
*Many different scenarios happen in this anime but the first 1/4 part of it is most important to watch*

Full Metal Panic came out in 2003 and I think the animation is gorgeous, everything is really bright and colorful which I what I love when watching any anime. I am probably going to end up saying every animation is beautiful :P. I love opening theme it has a really sweet, nice calming tune to it and is a song that can get stuck in your head. Along with the song the clips used in the opening theme go so well with the song itself, sometimes it is about the clips used that bring the whole thing together is what I believe ❤

Sousuke
Yes….Sousuke looks like he has the look of a pervert. Sousuke character is one of the most unquie characters out there I am telling you, he will leave you laughing the whole way through. Clueless, overdramatic, very thorough and caring are the great quailites about Sousuke, this anime would not have the main humor it has without him in it. I just love him he is one of my favorite male anime characters of all time. He had me from episode one when he went into military talk mode, I actually feel sorry for him a lot in the anime and you know why if you have watched it. I will add also total badass when he gets his hands on any mecha especially Arbalest/Al Oh man stuff goes down then.

Kaname
Don’t let this pretty face fool you because she sure fooled me in the beginning and she made her way into my top 10 favorite anime girls. Though Kaname can become aggressive (sometimes violent), stirs up trouble with that forthright personality of hers and a bit of tomboy I reckon, yet she is very caring and headstrong. I love everything about Kaname, I personally really look up to her a lot. She is a very strong character in the anime and stands out all the time, mostly she stands out when she is on a rampage of killing Sousuke. 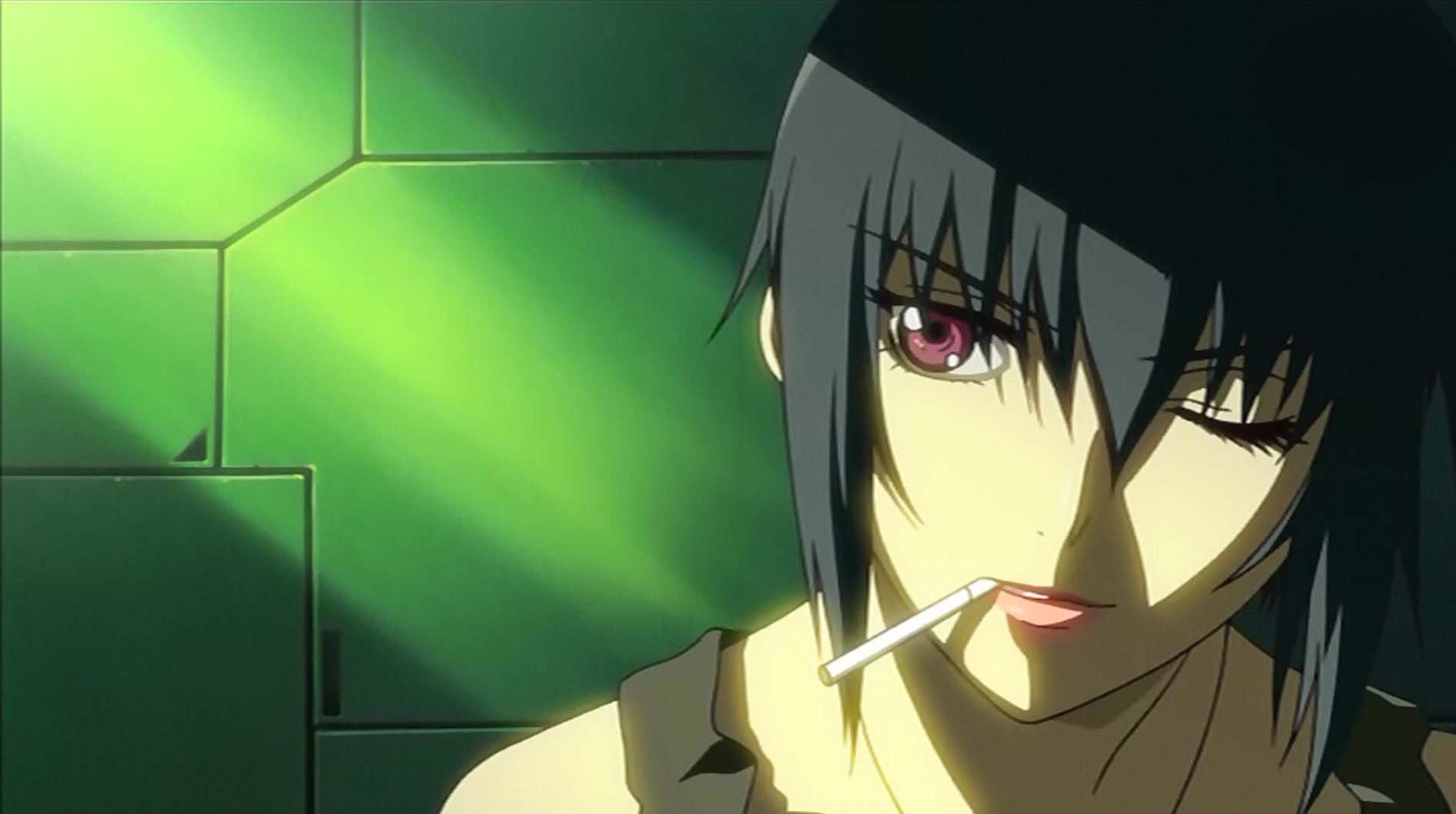 Mao
She is Sousuke and Kurz commanding officer and she is pretty awesome. It always hilarious when she takes no crap from Kurz Oh them pair together. Mao cares about her team a lot but when push comes to shove you don’t want to annoy her. 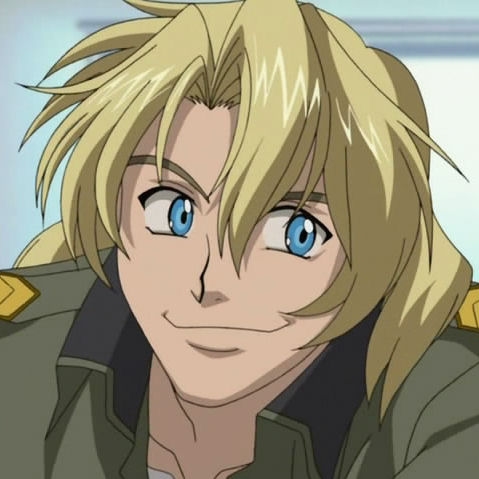 Kurz
He is part of Sousuke and Mao’s Team. This guy is the meaning of the word “no shame” flirt and pervert is what Kurz is. I do love Kurz though even with that side of him he brings such great humor to the anime, Plus he is one heck of a sniper shooter don’t let this perv fool you.

Tessa
She may not look it but this little lady is the Captain of Mithril, Captain Tesstarossa. I love Tessa she is adorable and yet a very crafty girl, There may be times in the anime you will see her really clumsy, kind of clueless side and then see her Military side. She is very headstrong just like Kaname and always tries her best at everything. I think she is a awesome captain ❤

Gauron
Oh this fellow is our main enemy that Mithril goes up against a lot in the anime and he is bad to the bone. Gauron’s character was perfect for some of the things that happened in the anime, I love his twisted personality though I still hate him. Sousuke and him also have some history together but I won’t say no more. 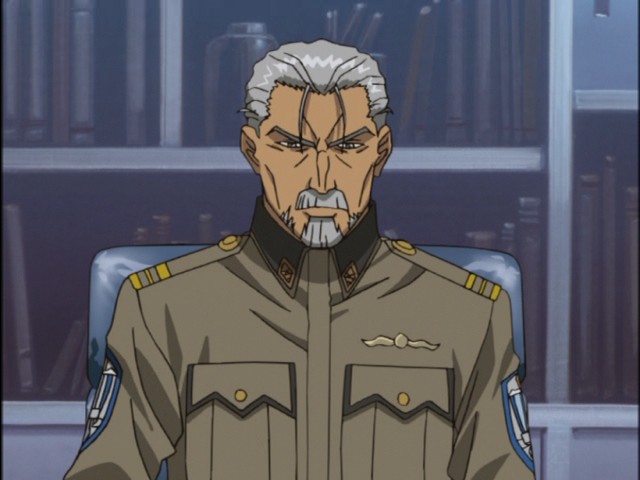 Kalinin
How can I forget this dude. Kailinin is a leading lieutenant commander officer of Sousuke and is always alongside Captain Tessa. Kalinin is a very proud military man and excellent, strategic plotter of missions, I love Kalinin he is like this old wise man full of wisdom, he is always giving Sousuke advice.

Wow so much to say on my feelings on this anime, so we could be here a while. 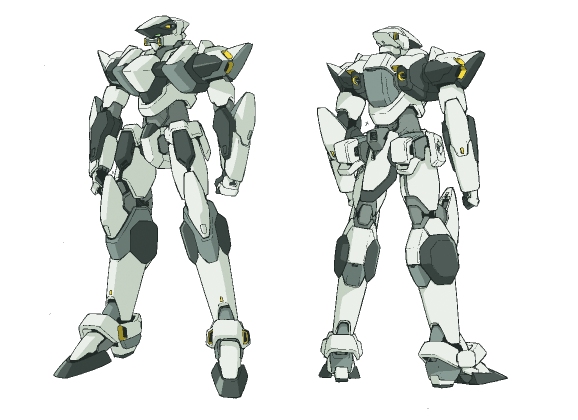 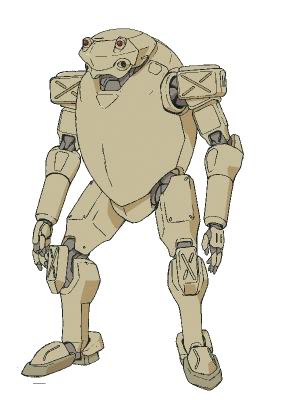 The Mecha’s in Full Metal Panic are pretty sweet especially Arablest which is techinally Sousuke’s machine. There are few very special specs about this robot mecha but I don’t want to give away too much for other readers. If you have seen this series then you might know what I mean about this robot. I remember seeing this Mecha in full action when Sousuke battles Gouran.
Sometimes the military talk in the anime can leave your brain in scrambles (left mine) but I just find it extremely fascinating at the same time. I feel this anime has a great sense of comedy and seriousness military wise, just a great combination.

One of the most entertaining things about this show was Kaname and Sousuke relationship.

Oh poor Sousuke because he doesn’t know anything about normal life and only can rely on military action, this frustrates a certain someone when Sousuke goes into overkill mode. Kaname I would say nearly the whole anime just wants to kill him, you will see her a lot either verbally yelling at him or giving him a mouthful of fan. Secretly I believe they care about one another deeply somewhere in their, even if they never show it. There are moments in the anime when you will see some cute moments between them, One is obvious is Sousuke’s mission to guard Kaname. For that is one of the reason I love Sousuke a lot he gives a 100% in everything he does. Scene’s like this below is what will get you laughing:

Oh I remember this scene well. Honestly without Kaname and Sousuke this anime would not have half it’s humor. It is nice to watch Sousuke learn about normal things in life and have that combination of his military. Full Metal Panic is not your typical Mecha Series it’s so much more than that, It has a great balance of comedy, Gives you that battle thrill, well developed plots and schemes that go on and extremely entertaining characters. 🙂

I totally recommend watching this show in the english dub it is just so good 🙂 I’m telling you just watch it !!
I have rewatched this show over 10 times and still brings me the joy of when I first watched. It will leave you laughing all the way through and so will the other two seasons which I will review soon ❤

Here’s a link to watch the anime: